New to the Magpie Archives 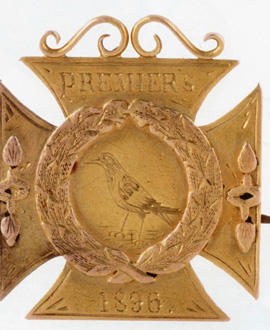 Despite everyone being in lockdown for much of the year, 2020 was still a big year for significant additions to the club’s collection of memorabilia.

The highlight was undoubtedly receiving Bill Strickland’s 1896 Premiership Medal, donated by family members David and Donna Thornton. This is a wonderful piece, and a great reminder of the club’s first ever Premiership, back in the VFA days. It’s also a reminder of what a great contributor Bill Strickland was, and I encourage you to read his story here. His name isn’t as well remembered these days as it should be, but he was a hugely influential figure in our club’s early history – our first Premiership captain, our first coach and our first great leader.

We were also very excited to be able to add jumpers worn by Murray Weideman in 1956 and Mick Twomey in 1960.

It is just brilliant to be able to pick up a couple of match-worn jumpers from that era, and especially from two such famous Collingwood names. They came through former Melbourne player Brian Dixon, who had swapped jumpers with Mick and Weed at different times.

We were also beyond happy to finally add the very first social club membership medallion to our collection. It was produced in 1940-41, was followed by another in 1941-42, and then cards were used until the more commonly recognised social club medallions were reintroduced in 1955. So this was a great addition – and many thanks to Georgina Deveraux for her help with it!

Plenty of others must have been sorting out old cupboards and drawers during lockdown too, so we thank:

We also thank former under-19s player Geoff Moloney and his wife Glenda for a superb group of photos from an under-19s trip to Warracknabeal in 1952. They were awesome – especially the ties! (if anyone out there still has one, please let us know)

And an extra, belated thank you to Ann Maree Hart-Trewin, who donated a wonderful old silk banner featuring a Magpie logo from many, many years ago. It’s magnificent!