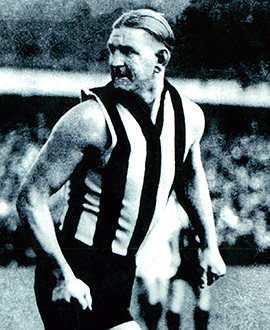 Syd Coventry, Collingwood’s first Brownlow Medal winner, described Albert Collier’s 1929 season as being “in championship class” and the men in white did not disagree.

Two years after Coventry won his award as a 28-year-old, Collier was only 20 years and 57 days when he was acknowledged as the greatest footballer in VFL football in one of the greatest teams of all-time.

Collingwood won all 18 of its home-and-away seasons in 1929, and their only defeat in the season came in a semi-final shock loss to Richmond, before the Magpies regrouped to win a third straight premiership.

According to The Machine, the inside story of football’s greatest team, Collier was adjudged by newspapers as being the club’s best player on at least five occasions, and as his team’s second best player three times.

But the umpires judged him as being best afield six times, which won him the award by two votes, from Melbourne’s dual winner Ivor Warne-Smith, Footscray’s Allan Hopkins and Fitzroy’s Arthur Batchelor.

It could well have been a bigger margin, had it not been for an indecisive umpire in the Round 15 game between Collingwood and Geelong. That umpire could not choose between two players, so he wrote both of their names on the voting slip.

As the Argus reported the morning after Collier had been announced as the winner, “one vote was set aside as informal because the umpire had voted for both A.Collier (Collingwood) and Todd (Geelong), saying he could not separate them. It was pointed out … that votes could be given for only one player.”

Fortunately, that null and void vote did not cost Collier the chance to win what so many believed had been his destined in 1929 – as not only the best defender in the game, but clearly the league’s best player.

Coventry said of his young centre-half-back: “Though only a lad, he marks splendidly, kicks with either foot, handles the ball clearly on the ground and does not make a mistake.”

Collier’s teammate Bruce Andrew, who had known him since his school days, said: “He won the Brownlow when he was a kid, really, and they were hard to win, because every time you got a kick, you were knocked down.”

But as hard as the game was back then, the footballer whose nickname was “Leeter” was more than up to the challenge, and he would become one of the most feared but respected players of his generation.

When he crashed through a pack during a game one day, his coach Jock McHale would exclaim: “God! Nothing could stop that.”
In Table Talk during his Brownlow Medal-winning year, Collier was described as “a strong, forceful player who has eyes but for the ball, and the ball alone, boasts a fine spring into the air for his marks (in which department he is ever safe), is sure in his ground play, and possesses a handy turn of speed.”

Collier’s fifth season was an incredibly consistent one, starting with a strong performance in the opening game, against Richmond at Victoria Park.

In Round 6 against North Melbourne, he was the most influential player, with the Argus saying: “Albert Collier’s work in Collingwood’s defence was the outstanding feature of the game.”

A week later, against Melbourne, it was said that “A. Collier marked and kicked splendidly”.

In Round 12 against Richmond, he was once more clearly best afield, with the Argus recording: “Collier’s marking was magnificent, his strong rushes irresistible and his general play all that it should be.”

The umpire could not choose between Albert Collier and George ‘Jocka’ Todd in Round 15, with the Magpie defender said to be “splendid at half-back … his marking and determined rushes were invaluable.”

And to cap off the season, most of the newspapers had listed Collier as Collingwood’s best player in the club’s final home-and-away game against Melbourne.

Just a few days after the regular season finished, the Brownlow Medal votes were counted at VFL House with Collier being declared the winner.

He would find out the full details next day, while working as a painter on the Herald and Weekly Times building in Flinders Street. He was sprucing up the news headquarters of the paper while he, himself, was making news as the Brownlow medallist.

In the VFL’s annual report, the league would say: “Mr Collier is only 20 years of age, has represented the club in interstate games and is not only a player of immense value to his team, but a credit to himself and the game of football. We trust he will be spared for many years to play the game so ably and enjoy the honour conferred upon him.”

And just as it had two years earlier with Coventry, Collier would combine the Brownlow Medal with a premiership by the end of September.

Like Coventry, too, Albert Collier would win the Copeland Trophy that season. And he too would not receive the Brownlow Medal itself until the following March.

In presenting the award to the Collingwood star, VFL president Dr W.C. McClelland said: “I desire to express the admiration of the league for the excellence of your football, and the scrupulous fairness which you have shown to opponents. You have played the game as all sportsmen desire that it should be played – with skill, courage and determination.

“Further, you have acquired that quality which is demanded in a Brownlow medallist. You have conquered yourself. I can confer on you one of the highest honours which the league can offer.”