A kid to watch

Adam Treloar won a career-high 37 disposals in his first match for Greater Western Sydney against Collingwood in round 18, 2012.

It was a rare moment in the heat of battle where an experienced star gave his talented young opponent some advice on how to potentially win the next clearance.

The bearer of the advice was Collingwood’s Scott Pendlebury. The teenager receiving it was a Greater Western Sydney young gun playing only his 14th AFL game – Adam Treloar.

The venue was at the Sydney Showgrounds, now known as Spotless Stadium.

It was round 18, 2012, and it was the first time Collingwood took on the AFL’s newest club, Greater Western Sydney, in a home-and-away match, having several months earlier played them in a NAB Cup game.

The moment came late in the game when the contest was well and truly over, and Collingwood was ambling towards a massive win against the young, but exceptionally talented GWS side.

Pendlebury suggested to Treloar that he would be better suited leading in a certain direction on the ground if he wanted to win the next contest.

For the briefest of moments, Treloar wondered if Pendlebury was setting him up in a trap. But instinctively, at the next opportunity, he went exactly where the Magpie star had told him, and he won the possession.

“He was giving me a few tips,” Treloar confessed a few days after the game. “He’s a star.”

Fast forward four years, and Pendlebury was still giving Treloar advice. The only difference was that this time were are on the same team – something that Pies fans are grateful for.

He wasn’t the only current Collingwood player to do that on that day. An eighteen-year-old called Taylor Adams was also making his presence felt for the Giants, showing he was going to be some player in the future.

Adams had 26 disposals, laid five tackles and won seven clearances in a strong performance for the Giants. So it is not hard to see why the Magpies were so keen to secure him when he became part of the trade that saw Heath Shaw head to Greater Western Sydney at the end of 2013. 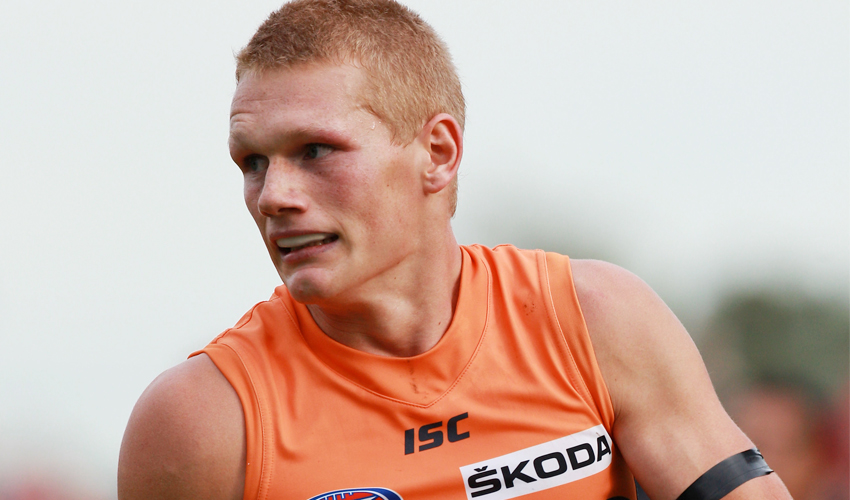 Adam Treloar is pictured during his first year as a Greater Western Sydney Giant.

But as good as Adams was in this game, it was the performance of Treloar that made the Magpies stand back, take notice, and identify him as a player who needed to be chased in the years to come.

With or without Pendlebury’s advice, Treloar had little trouble finding the ball that day. He had a game-high 37 disposals in a performance that would ultimately earn him a Rising Star nomination a few days later.

It was the same number of touches that Dane Swan had that game, but the Magpie midfielder was also able to slot home five goals in a remarkable display.

“I was pretty happy with my game,” Treloar told The Australian soon after. “But I would rather win any day of the week than have 37 touches.”

“It’s disappointing but we don’t really focus on how much we lose by. It’s about setting standards each week and meeting them. In our midfield group we beat Collingwood’s midfield and they are considered the best in the competition. Those little goals for us … as long as we achieve them, we are pretty happy.”

Swanny may have queried that line about the Giants’ midfield beating their Magpie opponents. For there was little doubt that Swan was in rare form, kicking almost a fifth of his team’s goals.

Kevin Sheedy’s new team kicked the first two goals of the game, but Collingwood dominated every other aspect of this inaugural game. Some unforgivable turnovers were simply too much for the young side, and that started from a kick-in intercepted by Jamie Elliott, who was standing on the mark, which provided the first goal.

Gratefully, Elliott slotted it through, and it was the start of seven goals for Collingwood in that opening, term, as the visitors opened up a 25-point lead at quarter-time. 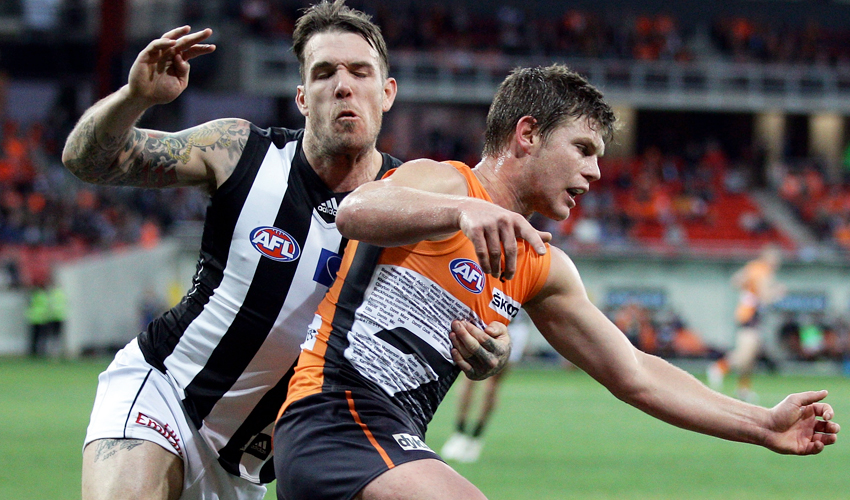 That set the scene for the rest of the game, something which frustrated Treloar, as he explained: “If you take away the last five minutes of each quarter, we are in the game.”

“It is the extra time at the end of each quarter where the fatigue kicks in for us young boys.

“It’s not a lack of talent, it is the fatigue that is costing us games and we will be better for a full pre-season at the end of this year.”

Six more goals in the second term for Collingwood stretched out the lead to 55 points by half-time.

The first of those came from Irish recruit Caolan Mooney, who slotted through his first goal in his third game, after a poor kick from defence from Phil Davis.

The difference was bloated out to 69 by the final change before an avalanche of goals – 9.4 to 1.1 – pushed the final margin out to 120 points.

Interestingly, Cloke’s bullocking effort in attack was described as “the perfect job application” with the Giants expressing an interest in securing the out-of-contract forward.

Swan, who won the three Brownlow Medal votes, said of Cloke, who secured two, “Unfortunately he hasn’t lived up to (his) high expectations this year, but hopefully this is the turning point for him and he starts to play some good, consistent footy … Probably only one person can answer that (if he will stay) and that’s Trav.”

Swanny joked that he got “a couple of cheap ones (goals) in junk time. Who doesn’t love sneaking forward?”

“I obviously prefer the midfield, but if I’m not getting a kick I like to sneak forward and see what I can do.”

That was far from the truth. Three of his five goals may have come in the final term, when the game was done and dusted, but each of them came from some sublime passages of play.

Typically, Sheedy was at his mischievous best when he suggested of Collingwood: “obviously they’ll have to improve to win the premiership on that performance.”

And he stressed the Giants were keen on chasing Cloke: “He’s a very strong, powerful, contested key forward and they’re the sort of people who are drawcards and if we want to build up our attendance, we have to bring in drawcards. Whether it’s Cloke or another person, that’s the sort of player you look at in the end because they’re drawcards.”

Nathan Buckley agreed that the Pies needed to get better, but expressed his club’s faith in Cloke because “he is one of us.”

“He is one of us, and all of us are focused on that and if you are not supporting us in that end, then you are not one of us,” the first-year coach said.

It is history now that Cloke decided to stay at Collingwood, signing a new contract only days after the Magpies bowed out of the finals, losing the 2012 Preliminary Final to Sydney.

And it’s history, too, that Adams would join Collingwood for season 2014, and the Magpies would move heaven and earth in late 2015 to convince Treloar that his future was as simple as Black and White.