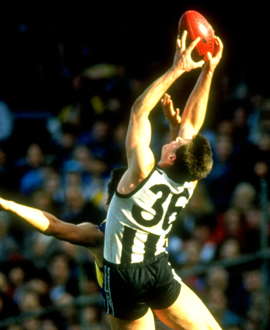 Saverio Rocca flies for a mark against West Coast in the round 13 contest in 1993, the match he was nominated for the AFL Rising Star Award.

The AFL Rising Star Award was instituted in 1993 to recognise and encourage talented young players in the AFL.  After each round of the home and away games, a player is nominated and at the end of the season a panel of experts selects the winner.

The winner must be under the age of 21 at January 1 of that year, must not have played more than 10 games at the start of the season and must not have been suspended by the AFL or State League tribunals during the season.

In 2007, the Rising Star Award was named in memory of former AFL Commission Chairman Ron Evans and the winner receives the Ron Evans Medal.

The inaugural award was won by Nathan Buckley in his first season for Brisbane in 1993. The only Magpie to have won it while playing with Collingwood was Jaidyn Stephenson in 2018.