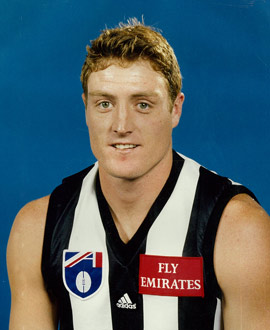 Jason Wild made his league debut on ANZAC Day 1995.

Collingwood has had a rich tradition of blooding young players in finals, with the likes of Len Thompson, Rene Kink and Ian Cooper among a long list of Magpies to play their first games in September.

The modern-day extension has been the annual ANZAC Day clash with Essendon, which rapidly became the biggest home-and-away match of the season almost from its inaugural contest in 1995.

Seven Collingwood players have made their debut on April 25 over the first 21 years.

Here are the stories of those first-game ANZAC Day Magpies.

Jason Wild’s journey took him from a footballer playing in front of a few hundred people at Collingullie-Ashmont, in NSW to a debutant playing in the first and most famous of the ANZAC Day matches before almost 95,000 fans.

That all happened in the space of a few years.

Wild had been drafted by the Magpies as pick No. 39 in the 1993 National Draft, and after Collingwood struggled in the first four rounds of 1995 due to serious injuries, he was a surprise selection for the much-anticipated clash.

Collingwood had lost almost 400 games of experience heading into the game when Gary Pert, Mark Richardson, Brad Rowe and Tony Francis were all ruled out with injury.

Nineteen-year-old Wild took his chance, graduating off the back of some solid form in the reserves.

That inaugural clash ebbed and flowed throughout the match, with the lead changing on numerous occasions. The packed MCG crowd made a cacophony of noise, as loud as most Grand Finals, with few spare spots remaining.

The second youngest player on the field that day behind Aaron James, Wild only had a limited impact on the game, having seven disposals. He kicked a behind and laid two tackles during the dramatic draw.

He would go onto play 70 matches in Black and White, originally wearing No.27, before later in his career taking over Tony Shaw‘s No.22 when he became a close-checking tagger with toughness but questionable kicking.

Eighteen-year-old Craig Jacotine received a fax (remember them?) from his old TAC Cup team Dandenong coaches when he was named for his first game for Collingwood.

It read: “Jaco, the grass is green, the goal posts are white, so what’s new? We won’t wish you good luck; good players make their own ability. Well done, enjoy the experience. Make it the first of many.”

But this wasn’t just any old game. This was the fifth Collingwood-Essendon ANZAC Day match, and it would be the biggest stage that Jacotine would play on during his short stint in black and white.

Before his debut, he said: “I’m looking forward to it, but I’ll have to try to block it (the crowd) out when I get out there, if that’s possible.”

Jacotine was listed as “lively” during his ANZAC debut as he slotted through a nice goal from the boundary line, which cut into Essendon’s lead. Wearing the No.38 jumper, it would be one of 11 possessions he would have.

The Pies trailed for most of the day – and by as much as 38 points at quarter-time – but they kicked four goals to one in the last term to go down by only eight points.

Sadly, for Jacotine, it was not the “first of many”. He would play 14 games in that wooden-spoon season of 1999 and a further two late the following year before being delisted by Collingwood.

David Cloke played his 66th game on ANZAC Day, 1977 – for Richmond against Collingwood. The match was Tom Hafey‘s first game as coach of Collingwood, having joined from Richmond, and it attracted 92,436 fans.

Cloke, who had been selected under the father-son rule in 2002, became the sixth Magpie to debut in 2004, following David King, Luke Mullins, Guy Richards, Bo Nixon and Tom Davidson.

His elevation came off the back of successive losses to Brisbane and Fremantle, and only one Collingwood win from its first four games, as well as the absence of forward Chris Tarrant.

Before the game, Anthony Rocca said Cloke’s inclusion would give the Magpies a shake-up in terms of endeavour as the 19-year-old was a hard-working, sometimes hard-hitting young player.

The Age detailed: “Collingwood will make a small yet crucial demand of Cloke: simply, that the teenager spend his AFL debut forcing the forward-line contests that the Magpies have sorely missed in the past three weeks.”

Cloke tried as hard as he could, but could manage only six disposals in the Magpies’ 33-point loss. His older brother, Jason, fared a little better, having 17 possessions in his 48th game.

Wearing the No.33 jumper that his father had worn, Cameron Cloke would go onto play 21 games with Collingwood – including the following year’s ANZAC Day clash – before other stints at Carlton and Port Adelaide.

While Cameron Cloke struggled in his Anzac Day debut, his younger brother Travis was named as one of the Magpies’ best players in the corresponding game the following season.

The 18-year-old started the match on the bench, but was thrust into the action early, and didn’t seem to be out of place when the heat of the game was on.

He went on to have 16 possessions in the Magpies’ 14-point loss, saying afterwards: “It was pretty exciting, but a bit of a letdown losing to Essendon.”

“I didn’t mind the speed of the game, the physicality – I always love that – it’s the decision-making (that is different), you only have a split second,”

The Herald Sun described his debut as “showing all the hallmarks of a future player of note.”

His raking, long left foot kicks were noted by the fans, and he said he hadn’t followed his father David’s questionable kicking action.

“Cam’s a lovely kick of the ball and always has been. Jason’s been a bit shaky … We’ve never played all together. I’ve played with Cam before and Jason before, but never all three of us.”

The Clokes didn’t have to wait long to make it happen. All three played in the following week’s game against St Kilda at the MCG.

But Cameron and Jason would eventually be moved on from the club, even though Travis remains at the club to this day.

Before ANZAC Day, 2008, the football world – and many Collingwood fans – knew Sharrod Wellingham only as the young player who cost the Magpies their $500,000 TAC sponsorship after a drink-driving incident.

After Collingwood’s 73-point win over Essendon that day, Wellingham showed himself as a footballer with real potential.

The 19-year-old midfielder had 17 disposals and laid four tackles in the club’s big win as a late inclusion to the young Magpies’ outfit, missing Anthony Rocca and Scott Burns.

Wellingham was one of five young replacements – none of them older than 21 – who had collectively played a grand total of 37 games.

“Eighteen-year-olds were carrying guns and facing enemy fire once,” Mick Malthouse said. “You’re never too young to perform for your team.”

Wellingham’s family had flown in the game, catching the red-eye from Perth, when they had been tipped off about his likely debut.

He had visited the Shrine of Remembrance on the Tuesday before the clash.

“The Shrine is just over the road, it was an opportunity for the players, the whole club, to go and pay their respects and have a little more of an understanding of what ANZAC Day is all about,” Malthouse said.

Wellingham said after the game: “I wasn’t as nervous as I thought I would be. I was more anxious than nervous.”

Two years later, he would be an important part of the 2010 premiership side. But his time at Collingwood lasted only for 92 games before he was traded to West Coast in 2013.

The symmetry was perfect. First gamer Brent Macaffer replaced the injured Alan Didak in the 2009 ANZAC Day clash, and ended up joining the same “club” in which Didak was already a member.

That is, the “first kick, first goal” club.

Macaffer won the nod as the late replacement for Didak ahead of Wellingham and Anthony Corrie, and made an immediate impact early on the match against Essendon.

Collingwood kicked the first goal of the game, via Anthony Rocca, and then four minutes and 18 seconds into the match 21-year-old Macaffer stepped up to score a major with his maiden kick.

The Magpies led the game by 15 points at the first change, but scores were locked together at half-time after an Essendon second-term rally. The Bombers opened a 17-point lead 20 minutes into the third quarter before a late goal to Leon Davis cut the margin back. It was a nine-point deficit for Collingwood heading into the last term.

Collingwood kicked four of the first five goals of the quarter, and when Davis kicked his second goal, plus three behind came from Leigh Brown (two) and Martin Clarke, the margin was 14 points at the 24-minute-mark.

Goals to Leroy Jetta and Ricky Dyson kept the change of a miracle Essendon revival alive, and that’s what happened on a greasy, wet afternoon, as David Zaharakis chimed with the match winning goal at the 30-minute-mark.

Macaffer (11 disposals) had experienced one of the biggest moments of his career only to have his first rendition of Good Old Collingwood Forever snatched off him at the death knell.

In AFL football, there is a fine line between elation and desolation. For Collingwood debutant Kirk Ugle, the last 45 seconds of the 2012 ANZAC Day match stands as testament to this.

The time was ticking down on Ugle’s first game, and with less than a minute remaining in the game, Collingwood was clinging gamely to a five-point lead after holding a slight ascendancy for most of the clash before 86,932 fans. What happened next was pure theatre.

Brent Stanton put the Bombers in front with a snapped goal with only two minutes and two seconds left on the clock. But just as the game looked headed in Essendon’s direction, it was left Collingwood’s Jarrad Blair to get the ball onto his boot in the goal square. A goal review confirmed the decision was the correct one.

Only 80 seconds were remaining, and Ugle could almost taste his first success as a Magpie.

But when Kyle Hardingham sent the ball into the half forward zone, Ugle found himself in the right place at the right time. He took the mark and then took his time getting the ball back into play.

The roar of the crowd meant he couldn’t hear the umpire call play on, and he was run down from behind. For a fleeting moment, it appeared as if that moment might cost Collingwood the game.

To his relief, and the relief of Magpies fans, the Bombers were unable to capitalise on the mistake in the time remaining, and Collingwood still had a one-point advantage when the final siren sounded.

He celebrated in the rooms with his mother, and three sisters, as well as his partner and daughter.

And the Herald Sun captured the moment when the 172cm Ugle hugged 200cm ruckman Darren Jolly in the afterglow of the victory. He only had five touches, but held his spot for the following week, but would play only three matches for his career in Black and White before being delisted at the end of 2012.