Babes for the Woods 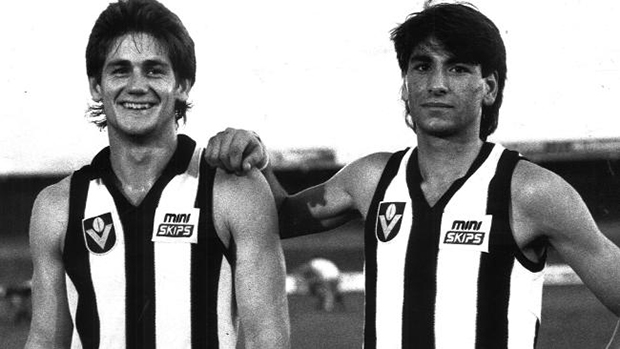 Gavin Crosisca and Athas Hrysoulakis pose for the News Limited cameras ahead of their debut in round one, 1987.

Lou Richards enjoyed an afternoon nap one mid-March afternoon ahead of what was going to be a big 64th birthday party that night, but when he woke he felt as if his world had changed.

It was same sort of feeling that many football fans felt on the eve of the 1987 VFL season.

Change was not only in the wind, it was blowing up a storm. And it seemed as if the football landscape was going to be changed forever.

In Richards’ case, it came in the bombshell decision from his employer Channel 7 – the long-standing network partner of Australian football – to opt out of the VFL broadcasting rights, seemingly silencing ‘Louie The Lip’ and allowing the ABC to take over the broadcasting for the season ahead.

“It’s a very sad day, I’m sad to be out of it,” Richards said before heading off to his party which he humorously called ‘The Last Supper’. By the end of the month, he had joined the Nine Network.

But the change was not just coming on our television screens.

The 1987 season would be a landmark one in Australian football, and few would be unaffected by the impact of those changes.

The near-bankrupt Melbourne clubs finally agreed to bring in two new franchises, West Coast and Brisbane, eager for the revenue that the licence fees would bring about. But the Eagles and the Lions were not the only new things. The inaugural draft happened a few months earlier (Collingwood’s first pick was West Adelaide midfielder Grantley Fielke); and a salary cap was implemented for the first time (it was $1.25 million for that first year).

About the only thing that hadn’t changed was the level of distrust between some clubs and league headquarters. Before the first round of that season – one that pitted Collingwood against Sydney – a group of concerned VFL clubs gathered at Victoria Park under the hint of darkness to discuss “league issues”, concerned with the direction in which the game was taking.

Change had come to Collingwood in a football sense, too.

In the lead-up to the season, it seemed as the Magpies had been cursed by injuries. Leigh Matthews, about to enter his second season as coach, couldn’t believe the club’s misfortune. Each practice match – a loss to Richmond at Donald, a win over Fitzroy at Parade, and a loss to Footscray at Western Oval – seemingly brought about fresh injuries and it left the club dangerously short of players ahead of the season-opener.

STATS: Review every Collingwood match since 1987.

Stress fractures in his right foot – caused by wearing sandals – ruled Peter Daicos out. Shane Morwood, who was hoping to be there for his brother Paul‘s first game in Black and White, suffered a knee injury.

Newly appointed captain Tony Shaw insisted he would be right after hurting his back in the match against the Lions and spending a week at home in a traction device. In the lead-up to the Swans’ game, he ran 10 laps on the first night and 12 the following night before proving his fitness on the Thursday night before the clash at Victoria Park.

Denis Banks and Darren Millane flew to Adelaide that same week to meet with surgeon James Hyde for an assessment of groin complaints. Both were cleared of any need for surgery, though Millane was told he had to rest for the next few weeks. Ron McKeown had stress fractures; Shane Kerrison could not be considered due to a hamstring complaint, while Russell Dickson and Mark Beers were also ruled out.

So what’s a coach meant to do when confronted with such an imposing injury lost? Pick a bunch of kids and a few interstate recruits, and hope for the best.

As luck would have it, the Magpies had an abundance of young hopefuls to choose from, including a number of players who had played in the 1986 under 19s premiership side.

Still, it was no easy task. Matthews hadn’t made up his mind on selection deep into the Thursday night’s training session, and Collingwood’s round one team to take on Sydney wasn’t processed to media until 10pm that night.

Channel Seven’s League Teams, which had featured Richards, Jack Dyer and Bob Davis, had been axed along with the rest of the footy coverage, so the lateness of the selected Collingwood team didn’t matter too much. But it was filed through to The Sun News-Pictorial in time for the metro editions of the newspaper.

The headline said it all: ‘Babes for the Woods’. Looking at the team – there would be nine new faces – the headline might well have said ‘Babes to the Woods’, for Richards’ Kiss Of Death preview of the game said Collingwood could expect a good old-fashioned hiding from the more experienced Swans.

“I’m all for giving the youngsters a go, but this is ridiculous! Dejected fans have already christened their heroes “Magpies Anonymous’,” Richards wrote. “Coach Leigh Matthews isn’t giving a pre-match talk; he’s welcoming the new boys to the club and introducing them to each other.”

Despite all the injuries, the reigning Copeland Trophy winner, ruckman Wes Fellowes, was relegated to the reserves, deemed unworthy of selection. Fellow ruckman David Cloke would play his 250th VFL match that day.

Two of the new Magpies had come from other clubs – former Swan and Saint Paul Morwood and former Hawk Glenn Howard. Two were from Western Australia – Craig Starcevich and Michael Christian – while Fielke had come from South Australia.

And four of the new faces were from the successful under 19s side – the previous year’s ‘thirds’ best-and-fairest winner Neil Brindley, Athas Hrysoulakis and a couple of other likely lads in Gavin Brown and Gavin Crosisca.

Brindley, 19, recruited from Greensborough, received a phone call from Matthews on the Friday night before the game, informing him he would shadow star Swan Barry Mitchell for the game.

He recalled: “It was a bit of a shock to be picked … I debuted with a number of under 19s players and also some recruits who came across (from interstate).”

“It was a very, very new side … I think it was the start of the building block for the 1990 premiership.”

Four of those nine new faces would be there three-and-a-half years later when Collingwood on the 1990 premiership, but that must have seemed like a pipedream then for the 17,129 fans who attended Victoria Park for that March 28, 1987 game against Sydney.

The Swans were too good, from start to finish, setting the scene with five goals to nil in the first term and never looking challenged. By half-time the difference was 73 points, and it had bloated to 95 at the last change. Collingwood managed to outscore Sydney in the final term, kicking six goals to five, but the Magpies still went down by 91 points.

Sydney forward Warwick Capper kicked nine goals for the game – seven in the first 41 minutes and only two fewer than the Magpies. Each time he scored, he gave an insulting gesture to the crowd, and at half-time there was almost an ugly scene when one frustrated Collingwood fan confronted Capper as he came off the field.

Swans coach Tom Hafey took Capper off towards the end of the game to avoid any further trouble, which perhaps cost him from kicking more double figure goals.

The first person to congratulate Capper in the dark and dank visitors’ rooms was Australian Prime Minister and Sydney Swans supporter Bob Hawke.

Hawke had reason to celebrate the moment – the score line of 25.15 (165) to 11.8 (74) was, and still is, Sydney’s biggest score against Collingwood, and 91 points remains the Swans’ greatest winning margin against the Magpies. 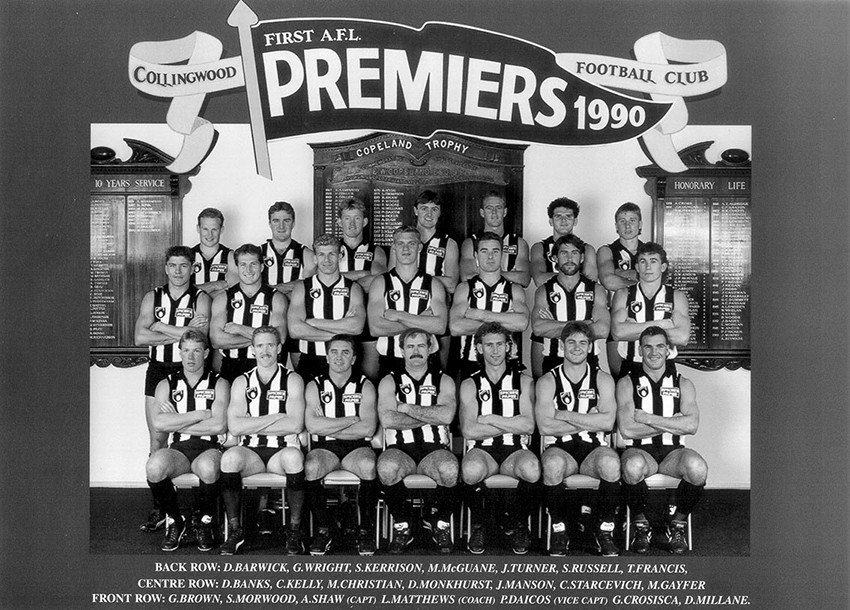 Four members of Collingwood’s 1990 premiership team (Gavin Brown, Michael Christian, Gavin Crosisca and Craig Starcevich) made their senior debuts in the club’s 91-point loss to Sydney in round one, 1987.

Hafey was realistic after the game, saying: “It’s good to have a first up win, but it is a different Collingwood side from what we’ve seen in the past, mainly because of all the recruits they’ve got.”

Matthews told reporters: “Athas Hrysoulakis and Craig Starcevich were probably the two plusses for us off the top of my head. But they were small mercies really when you’ve been beaten so badly.”

“But we have no choice other than to play the inexperienced players and there’s nobody in the reserves, apart from Wes Fellowes, that are likely to come through in the immediate future.”

Mitchell had had 35 touches and kicked three goals, which made for a busy afternoon for Brindley in what was his only game in black and white.

“I managed to play the whole four quarters without being rested … I didn’t get picked the following week,” Brindley recalled.

It was a tough call on 19-year-old Brindley, who was an exceptionally good footballer, and a quality individual, as Mitchell was one of the most exciting players in the competition at that stage.

Matthews admitted as much later. Brindley would later return to the Diamond Valley Football League, where he had a long and distinguished career with Greensborough. He deserved another chance, but sadly didn’t get it.

But the winds of change were blowing. As the Magpie fans trudged home from the game that night, they had taken a glimpse into the club’s future.

The skinny kid with raw courage wearing the No.26 jumper, Gavin Brown, had 21 touches; 18-year-old Gavin Crosisca had 19 disposals; Craig Starcevich kicked three goals; and Michael Christian showed he had a future. 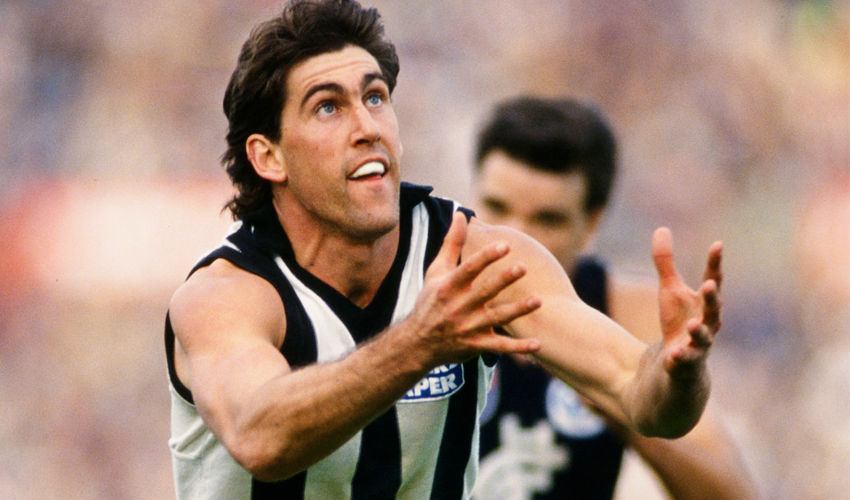 Craig Starcevich kicked three goals from 21 disposals on debut against the Swans in round one, 1987.

So, too, did the Magpies. From one of the darkness of the club’s worst ever round one loss – 91 points – it would lead to one of the most illuminating of moments.

One hundred and four games on, and before a crowd of almost 99,000 at the MCG, four of those nine fresh faces from 1987 were among the 20 players who helped to end one of Australian sport’s long-running and most embarrassing droughts.

All played key roles in Collingwood’s drought-breaking 1990 flag. Brown was knocked out during a quarter-time melee, but returned in an inspirational effort during the third term. Crosisca kicked two critical goals. Starcevich kicked a goal and was in the running for the Norm Smith Medal before he was concussed by Terry Daniher, the same Bomber who had earlier struck Brown. And Christian played a steady but important hand deep in defence.