Birth of the Magpies Pt1 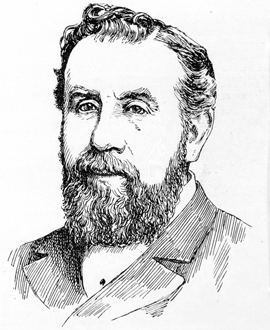 Friday 7th June, 1889, was a typically bleak Melbourne winter’s day – windy, squally, cold and showery. There were severe floods on the Murray and Goulburn rivers and in Numurkah. But a far more catastrophic flood, in Johnstown Pennsylvania, was the major international story of the day. That flood, caused by a dam breaking, would end up killing more than 2000 people.

The Argus carried a special cable from London that Madame Nellie Melba (also known as ‘Mrs. Armstrong, of Melbourne’) had been wowing crowds with her performance in Rigoletto, one critic saying it would be “impossible to surpass her voice for purity and sweetness”. The same paper reported with great excitement that the RMS Oroya, of the Orient line, had left Melbourne for London the previous day carrying the second largest cargo of mail in our city’s brief history.

In football circles, there was controversy over Carlton players being caught wearing illegal nails or stops in their boots against Essendon the previous Saturday. And a team of Maori footballers, having been to Kyneton and Daylesford during the week, was going to play a game against Essendon on Saturday.

But local Collingwood MP and former mayor George Langridge presumably cared little about such matters. He spent much of that Friday at Customs House (now the Immigration Museum) chairing meetings about Victoria’s wine displays at the Paris World’s Fair, but his mind would surely already have been on another, more important, meeting he would attend that evening: one that would give birth to the Collingwood Football Club.

When George Langridge left the Customs House building that day, he headed to Harriet Pryde’s City Hotel, in Johnston Street Collingwood (which later became the John Barleycorn Hotel). There he was met by a large group of local businessmen, politicians and community leaders, all of whom were there for one reason – to talk about forming a senior football club that would represent Collingwood in the Victorian Football Association.

At that point the closest thing that Collingwood had to a football team was a junior club called Britannia (‘junior’ referring not to the age of its players but to its standing within the game). The Brits played at Victoria Park, but were aligned as much, if not more, with Fitzroy than they were with Collingwood.

Fitzroy had formed its own senior football club in 1883, and it was part of the VFA. Some of Collingwood’s other geographical neighbours such as Richmond and Carlton had teams in that competition too, as did lowly ranked suburbs like Footscray and Williamstown. Increasingly, people in Collingwood were asking, ‘What about us?’ Letters even began appearing in local Collingwood papers, urging “leading citizens” to push for a team that year.

Part of that push was commercial. Businessmen and leaders had seen the crowds being attracted to senior football matches in other suburbs and wanted a piece of the pie. Partly it was also driven by the desire to see local boys playing football with a local team that carried the name of their municipality.

But mostly it was driven by a fierce parochial pride. Collingwood was regarded as not much more than a slum in those days. It was mocked as a place of pestilence, poverty, larrikinism and crime. As the Clifton Hill Tribune noted a few years later, Collingwood had a reputation as a place of “moral filth, a hot bed of vulgarity in forms of speech and general manners, and a very poor and despised place.”

Faced with such opinions, many locals began to feel that having a senior football club bearing the Collingwood name might be one of the few ways of gaining some respect from the rest of Melbourne – maybe even taking it up to them.

When public pressure starts to build momentum, you know that politicians will never be far behind. Langridge himself had been twice Collingwood mayor previously, and was coming towards the end of what would be a 17-year reign representing Collingwood in the Legislative Assembly. At the City Hotel that night were the current mayor, community leaders, business representatives and a number of other councillors, including one, William Beazley, who had been elected to State parliament for the first time earlier that year (Collingwood was a dual occupancy seat, so was entitled to two MLAs). He would hold the seat for a further 15 years. Also there were Edwin Wilson, the town auditor, and Alf Manfield, a local landowner.

Langridge told the meeting that it was nothing short of “a disgrace” that Collingwood did not possess either a senior football or a senior cricket club, meaning that teams in other suburbs were being manned with Collingwood locals. He didn’t want Collingwood to be a training ground for other clubs any longer, and he called on Britannia to help clear the path.

Beazley spoke, and emphasised the support that could be expected from council. The meeting unanimously passed a motion declaring “that it is desirable to form a Senior Football Club in Collingwood, and that the Britannia Club be asked to co-operate in doing so.” A delegation, headed by the MPs Langridge and Beazley, was appointed to meet with the Britannia committee as soon as possible.

That meeting took place two weeks later, at the Grace Darling Hotel in Smith Street. Both local newspapers, the Observer and the Mercury, were right behind the move, and the Mercury did its best to encourage Britannia officials to support it.

“Collingwood could undoubtedly turn out a first-rate club,” the paper wrote the day before the Britannia meeting, “and one that would be able to hold its own. It has some first-class exponents of the game, who directly they become at all prominent go away and play with a Senior Club in another district. The Association could not possibly overlook the fact. It [Collingwood] is possessed of a very large population, the oldest suburban city, and from the amount of support not only monetarily but also from prominent players which has been promised, also the opportunity of an enclosed ground, the club should undoubtedly be represented on the Association.”

As it turned out, Britannia’s support was never in doubt. They wanted to be in the VFA every bit as much as the people behind the Collingwood push, but they had been knocked back several times previously and realistically knew they were neither successful nor organised enough to make it happen on their own. That was confirmed at the meeting on June 21st at the Grace Darling, when the Britannia president, Mr Anson, announced that his club had unanimously decided to help Collingwood’s supporters in forming a club.

The VFA’s next meeting was only a week away, but a Collingwood-Britannia deputation was formed that night and immediately began preparing to appear. The Collingwood Council was formally asked for permission for the yet-to-exist club to play at Victoria Park.

And there was one other important detail that was agreed that night: the name of the new entity would be the Collingwood Football Club.