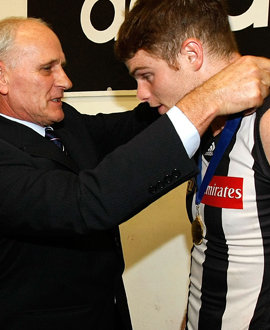 Heath Shaw is presented with the Rose-Sutton Medal by Charles Sutton Junior after the round six win in 2011.

Since the 2000 AFL season, Collingwood and the Western Bulldogs have competed for the Robert Rose Cup.

Robert Rose was a former footballer who played for both clubs and was the son of Collingwood legend Bob Rose. Following a car accident in 1974, Robert became a quadriplegic at age 22 and died at the age of 47 in 1999.

After his death The Robert Rose Foundation, for Victorians with spinal cord injuries, was named in his honour.

The Robert Rose Cup was then created to commemorate Robert’s contribution to sport and more importantly to raise funds for The Robert Rose Foundation.

As of the 2007 season, both clubs agreed to award a medal after the presentation of the Robert Rose Cup.  Named after Robert’s father, Bob Rose, and Footscray legend Charlie Sutton.

The Bob Rose–Charlie Sutton Medal is awarded to the player in the match who best exemplifies the qualities for which Sutton and Rose became renowned over their careers – courage, skill, leadership, and sportsmanship.