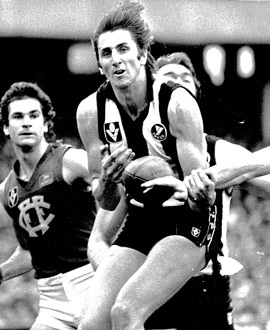 IT was the screw kick shot for goal that helped save a season, and provided one of the most dramatic conclusions to a Collingwood final.

The Magpies’ 1981 first semi-final match-up with Fitzroy at the MCG was a game of fluctuating fortunes, with twists of fate – cruel and otherwise – for the fans of both sides.

First, it was Collingwood that dominated the game. Tom Hafey’s side looked to have put the contest beyond doubt – with a preliminary final berth on offer – when they led by as much as 45 points in the early stages of the third quarter.

Then something strange happened. Collingwood stopped to a walk. Or more correctly, Fitzroy launched an extraordinary comeback. With only a handful of minutes left in the match, the Lions had not only wrested the lead back, but led the game by 10 points at the 27-minute-mark.

As more than a few long-suffering Magpie fans made their way through the crowd, chasing the exit, it looked as if the Collingwood curse would continue with a straight sets finals departure for 1981. A week earlier, the Magpies had lost to Geelong in a qualifying final. Now they looked to have blown another chance to push deep into September and chase that elusive 14th flag.

The tall, lightly-framed forward had grown up as a Collingwood supporter. It’s not hard to guess why. His brother, Ian, who was 17 years his senior, topped the league goalkicking and won a premiership with Collingwood in 1958. But having been tied to Melbourne, courtesy of his junior days at Bentleigh-McKinnon, Ross was always headed to Melbourne.

He played 121 games for the struggling Demons from 1972 to 1978, but was up for a new challenge with Collingwood in 1979, when he was given the chance to cross to Victoria Park in a deal involving Wayne Gordon and John Dellamarta.

In his first season in black and white, he played in four finals, kicking three goals in the preliminary final against North Melbourne before adding one in the losing 1979 Grand Final to Carlton. He missed out on the 1980 finals series after suffering a late-season injury, but was back to play an important role the following year.

In all, Brewer played 47 games for Collingwood, but it was his third last that remains large in the minds of football fans.

A long kick-in from Collingwood full back Peter McCormack found itself in the hands of Craig Davis. He put the ball out in front of Brewer, who gathered the ball at half-forward, and gave off a delicate pass to Peter Daicos. It was no surprise to anyone that Daicos nailed the goal from 35m out.

The deficit was back to four points. No one knew how long was left in the game.

Immediately on resumption of play, stand-in ruckman Stuart Atkin – who had replaced the injured Peter Moore, who had torn his hamstring earlier in the match – punched the ball forward. Ray Shaw drove the ball into Craig Davis, who was spoiled from behind from Chris Smith, with the umpire Mike Dye deeming an infringement.

Too far out to score, Davis sent a spiralling kick into the goal square, and a flurry of activity in the crowded pack gave 28-year-old Brewer his chance at the 29-minute-mark.

The forward missed the mark, but responded brilliantly. As he recalled: “Craig Davis kicked it, and we flew for the ball. Laurie Serafini was my opponent, but it spilled from the contest and fell into my hands, and I screwed it over my shoulder.”

As Grant Lawrie said in the book, For the Love of the Jumper, “I was in the goal square when Ross Brewer has picked the ball up and he’s just gone to kick. I’ve gone to smother, and he’s kicked it about 30 metres in the air and three metres in distance. It’s just gone over the goal line to put them in front.”

The difference was two points in Collingwood’s favour, but the question mark was whether there was enough time left for the Lions to score. Lee Murnane tore the ball out of the middle and drove the ball long into Fitzroy’s attacking zone. Fortunately, for Collingwood, McCormack was able to see the ball over the goal-line for a behind.

It was a point to difference.

Somehow Collingwood was able to run the clock down, and hold on to win this match by the barest of margins to advance to the preliminary final. The Magpies celebrated; the Lions lamented.

As the Age recounted: “There’s never been a football survivor quite like Collingwood. For totally inexplicable reasons, its heart continues to beat when for all intents and purposes it is dead. It clawed its way out of the grave again.

“Of all Collingwood’s astounding September reversals, rallies or revivals – call them what you will – this surely must have been one of the greatest, one of the most important. It is though this club, soaked in tradition and more proud than any other, has elevated Lazarus to the patron saint of Victoria Park.”

Unfortunately, there would be no miraculous revival in the Grand Final a fortnight later against Carlton. The Magpies defeated the Cats in a preliminary final but went down to Carlton by 20 points in the premiership-decider.

Still, Brewer became a part of Collingwood folklore for his miraculous goal to sink Fitzroy, even after he transferred to Richmond the following year. That gave him some bragging rights too at work the following week. He worked in the Commonwealth Bank in Lygon St, Carlton, where one of his work mates was Lions wingman Peter Francis.

As Brewer told the Age:“We got to work on the Monday and he (Francis) wouldn’t talk to me.”