Lou Richards loved him; Jack Dyer wasn’t as enamoured for pronunciation reasons, but there was no doubting Athas Hrysoulakis‘ popularity with Collingwood fans during his relatively short stint at Victoria Park.

Hrysoulakis had undeniable talent, even if his final tally amounted to only 19 games and 15 goals.

The kid from Lalor with the cosmopolitan name that Dyer stumbled over with an almost guaranteed radio regularity, and the Greek background that Richards could relate to, had been an outstanding teenage footballer.

For a time, it seemed as if he might parlay that into a highly successful league career. Hrysoulakis gave more than a few flashes of his ability as forward, kicked five goals in his 13th senior game, and he was one of 32 players to don the Black and White jumper during that remarkable 1990 season before his career at Collingwood ended prematurely.

Described by the Herald Sun as an “elusive quick forward with a keen goal-sense and a fair share of skill”, he first came to notice through the club’s under-age talent squads and in elite state junior teams.

In 1986, Hrysoulakis was a member of the Victorian Teal Cup side – along with a raw young ruckman called Damian Monkhorst – that won the title against Western Australia at Football Park by 125 points. His form was even good enough to see him named in the under 17s All Australian team that included the likes of future AFL players Nathan Burke, John Barnes, Glenn Lovett and Shaun Smith.

On Grand Final day 1986, that young group of Magpies defeated North Melbourne, and it was seen as part of the building blocks required for the club to chase that elusive 14th league flag.

Hrysoulakis was named by the Sun newspaper as the best player in that 1986 victory, kicking two goals in the win.

That sort of promise displayed, his solid work in the next preseason, and a significant injury list leading into Collingwood’s round one, 1987 season opener saw him named as one of nine fresh faces named to take on Sydney at Victoria Park. It was hardly a debut to remember, even if Hrysoulakis was one of the high points of a very bleak afternoon for the new-look Magpies.

The Swans won the match by 91 points, and coach Leigh Matthews admitted post-game that there were very few positives to take out of the game, other than the debut of Hrysoulakis, and the first performance in Black and White of 19-year-old West Australian Craig Starcevich.

Wearing the No. 37 jumper, Hrysoulakis had 12 touches in his first game, but managed only five in his second, against Carlton, the following week, having suffered ankle ligament damage in the loss.

He wouldn’t return to the seniors until round 11 against Geelong, and in his first season, played nine matches. In keeping with the frustrating season the club had, he played in only one win from those first nine games.

Hrysoulakis did not play a senior game in 1988, and for a time looked destined to leave the club. Collingwood’s eagerness to chase Tony McGuinness meant that he was linked to a trade along with Wes Fellowes and Ron McKeown for the Footscray rover. But it never eventuated.

After one game early in the season, Hrysoulakis was relegated back to the reserves for much of 1989 before being afforded another chance in the round 16 clash with Hawthorn. That was the start of a string of games where he grasped the opportunities presented to him, and he locked in a forward spot late in the season.

His best performance that season – indeed of his entire VFL-AFL career – came in the round 18 clash against Sydney at Victoria Park. While the Magpies went down by four points, he played a significant role, kicking five goals and having 16 possessions.

Lou Richards, who had a Greek heritage courtesy of his great-grandfather, took great delight in talking Hrysoulakis up, just as his old media mate Jack Dyer was battling to pronounce his name.

In the Sun News-Pictorial, Richards wrote: “Boy, is he a real find? … I love him. My great-grandfather was Greek, but his name wasn’t quite Athas Hrysoulakis. What a name, what a player. The (five) goals ‘Souvlaki’ kicked were a football gourmet’s delight.”

The Age’s Patrick Smithers summed up the mood in the Victoria Park crowd when Hrysoulakis was slotting through the goals: “Halfway through the first quarter at Victoria Park on Saturday the Sherrin Stand had a new hero. Three times they cried out: ‘Athas’ as Collingwood’s skinny half-forward Athas Hrysoulakis booted his side’s first three goals.”

He even regained the lead for Collingwood with a goal at the 11-minute-mark of the last quarter, even though the Swans overran the Magpies.

The performance was the high point of his cult status at Victoria Park. Part of that came from his multicultural name, which resonated with many supporters, and part of it came from his livewire antics in the forward line.

One former teammate described Hrysoulakis as being quick for his size (he stood at 184cm and weighed 83kg) with a light frame. But he said much of the fanfare came from his ability to bring the crowd to his feet with his strong marking abilities. He didn’t necessary ride on the back of opponents, but had a knack of sliding across the side of packs and dragging down powerful marks.

Twice, he did that against the Swans, and a cult hero was born. 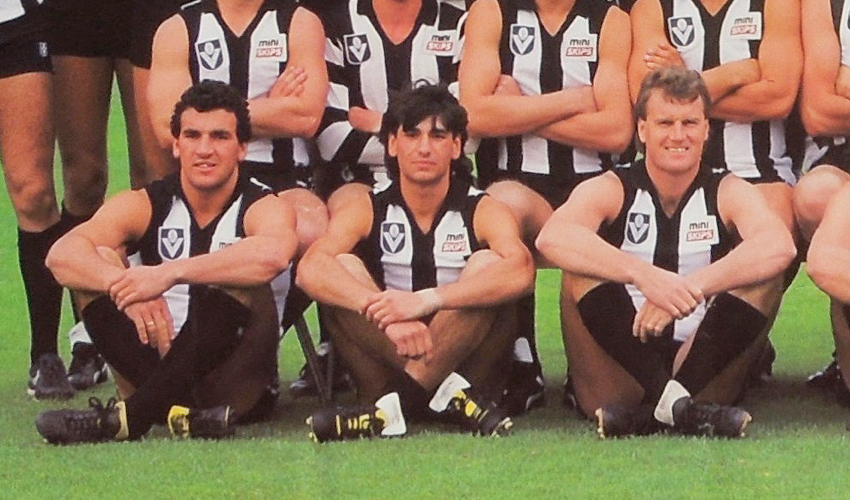 Seated next to the great Darren Millane in Collingwood’s 1987 team photo.

Teammates remembered him as being a relatively quiet player off the field, but more than capable of being vocal on the ground.

Hrysoulakis kicked 13 goals in a five-week period near the end of the 1989 home and away season before being a late withdrawal for the last round with a sore knee.

But the impact that he made in attack during that late stretch of games saw Matthews bring Hrysoulakis back for the 1989 Elimination Final against Melbourne at Waverley Park. And he backed up the coach’s faith, having 22 disposals and kicking a goal in a strong performance on what was a disappointing day for his team.

As the Magpies built towards 1990 – off the back of two unsuccessful finals campaigns – one sports journalist said of Hrysoulakis: “If he builds up … he could snaffle one of the half-forward flanks.”

Such was the belief that he was ready to take the next step that he was even rewarded with his own Scanlens Stimorol football card, No.57 of 168, in the 1990 season.

But instead of consolidating his position within the team, Hrysoulakis went back to being a bit player, only called upon sporadically to fill a few gaps.

There were varying reasons for this. For a start, the Magpies had built such a handy list that it was harder to get a regular game, but Hrysoulakis’ teammate Brian Taylor would later say that he didn’t work hard enough.

He played two games in 1990, against Geelong (with four disposals) in round 12, and against Carlton (with no disposals) in round 15, and was never seriously considered a serious chance of breaking into the side that would ultimately break the club’s 32-year premiership hoodoo in October.

But, 25 years later, the fact that he was on the playing list that season would see him honoured along with other players and staff and board members in the Magpies’ Hall of Fame.

By the start of the 1991 season, Hrysoulakis was gone. The club’s football manager, Graeme Allan, said he had been delisted for “list management reasons”.

Allan didn’t say it, but the Herald Sun suggested the decision came about because the Magpies were dissatisfied with “his general attitude to fitness and training.”

But the 22-year-old insisted he wasn’t getting the opportunities he deserved. He would say: “I’m not disappointed, I wanted to leave the club … In a way I’m relieved.”

“I’ve wanted a change for a while now. I’ve had no motivation.”

Hrysoulakis joined Prahran for a period, playing under Taylor, but he was provided with an AFL lifeline in the 1991 mid-season draft, being chosen by Richmond as pick 5.

He vowed: “I’ve really got no excuses now. I’ll give it everything. I’ll work on my fitness and I don’t think I’ll have any trouble fitting in.”

“I was in and out of the team (Collingwood) for a while. It’s not news that I think I should have been in more often. Hopefully, I’ll be able to get a regular game and prove them wrong.”

Tiger coach Kevin Bartlett said: “I remember one day he killed us in the reserves. I suppose the acid test is on him to work harder than ever before to realise that talent with our help and encouragement.”

However, it was not to be, and Hrysoulakis never added to the 19 games he played at Collingwood, though he would later play with success in the Diamond Valley Football League, including topping the league goal kicking for Lalor in a premiership year in 1998.

But to Collingwood fans, he will always be remembered for the promise he showed, that five-goal haul against Sydney in 1989, and the name that remains instantly recognisable to this day.