Big Bob, or 'Stretch' or 'Lurch' as he was known, was the second tallest footballer in VFL history when he made his Magpie debut.

But a player’s physical dimensions can also have a lot to do with it. Often they’re mighty midgets like Ronnie Wearmouth and Micky Bone, or larger-than-life types such as Ray Gabelich and Graeme Jenkin. In Bob Heard‘s case, it had a lot to do with his height.

Big Bob, or ‘Stretch’ or ‘Lurch’ as he was known, was the second tallest footballer in VFL history when he made his Magpie debut. This, combined with his slightly ungainly appearance and sometimes awkward movements, helped make him a fan favourite – especially once it was clear that he could play good football.

Heard had been a star with Preston in the VFA, and whenever anyone talked about him crossing to the VFL, it was always his height that was mentioned. He really was exceptionally tall for his time.

As a youngster, Bob hadn’t actually been much of a footballer at all: his twin brother, Charlie, made the school team at Preston Tech while Bob missed out. Bob was tall and skinny and didn’t think he was any good at the game so didn’t take it seriously. After he left school a couple of his mates talked him into playing with Wanderers in the Preston and District Association, and that’s where he discovered he had both an aptitude and passion for the game. 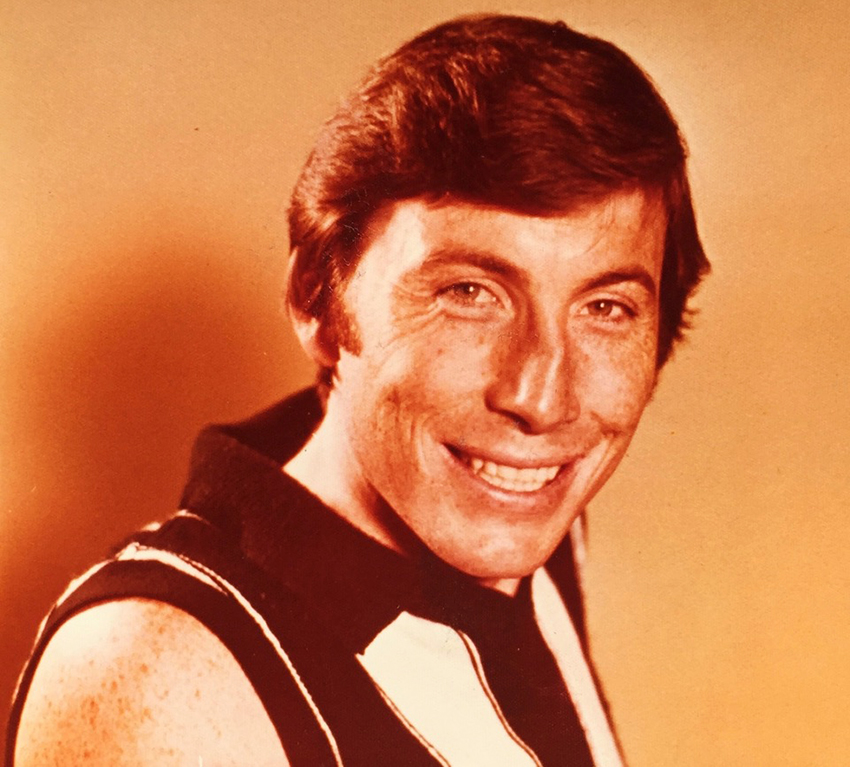 Posing for a photo in the Victoria Park change rooms.

He was ‘only’ around 6’3″ at that stage but kept growing after he joined Preston thirds the next year and quickly worked his way through the ranks to join the seniors. He first came to the attention of the wider football world when he starred in the 1968 VFA grand final as the Bullants beat Prahran. He played the best game of his career to that point that day, dominating the ruck and sealing his reputation as the most exciting young player in the VFA.

Collingwood, which enjoyed a good relationship with Preston, got in touch with Heard almost immediately, but he decided to stay with Preston for 1969. He was even better that year (finishing runner-up in the best-and-fairest in another Preston Premiership side and being rated the best big man in the VFA), and the Pies went after the youngster aggressively for the 1970 season.

They needed to be aggressive, too, as several interstate clubs dangled enticing offers in front of Heard. Even more worryingly, the Bullants were reluctant to let their young star go. The mild-mannered Heard soon found his name plastered over the back pages of newspapers as he became the central figure in a clearance war.

Luckily for Collingwood, the VFA was facing expulsion from the Australasian National Football Council for having regularly played players without clearances (which would have meant that Heard could cross to Victoria Park without a permit), so Preston caved in at the last minute and approved his transfer.

At 6’7 ½” in the old language (his twin brother had stopped growing at around 6’1″), Heard was hard to miss when he made his debut against Footscray in the opening round of 1970. He also had the biggest feet that anyone at Victoria Park could remember – he needed size 14 boots.

After all the buzz surrounding his VFA performances and clearance wrangle, there was plenty of hype surrounding Heard’s arrival at Collingwood. And he let nobody down. He starred in the practice matches and was named on the bench for the opening game of the season, coming onto the ground late in the game and taking a spectacular mark. He started on the ground for his second, against Richmond, and kicked three goals to immediately endear himself to Magpie fans.

Over time, Heard developed into a wonderful tap ruckman. He had lovely ‘soft’ hands that could direct the ball seemingly at will into the hands of his rovers. He never really filled out his frame and remained lanky throughout his career, but he was durable nonetheless. He was also a good mark and an accurate kick for goal, a combination that made him a dangerous opponent when resting in a forward pocket (he averaged more than a goal a game during his Collingwood career).

Heard initially struggled to hold down a regular place, and was on the bench for the infamous 1970 Grand Final. In 1971 he tied for the Gardiner Medal, a poisoned chalice awarded to the best player in the VFL’s reserves competition – a sure sign that a player was spending more time in the seconds than he would like. But from 1972 onwards he was a regular alongside fellow big men Len Thompson, Graeme Jenkin and ‘Twiggy’ Dunne.

Heard was an affable, popular teammate with a dry, laconic sense of humour. But after 106 games in six seasons at Victoria Park, Heard left for Richmond in 1976, where he played a further 54 games in four seasons before finishing up his career back where it began, at Preston.

It’s scary to think that a bloke who was once the second tallest to play VFL football was the same height as a number of current players who aren’t even ruckmen – they’re mobile marking forwards. That’s the evolution of football. But Bob Heard has a career record to be proud of – more than 150 games and more than 150 goals is proof that he was much more than just a physical oddity on the football scene. 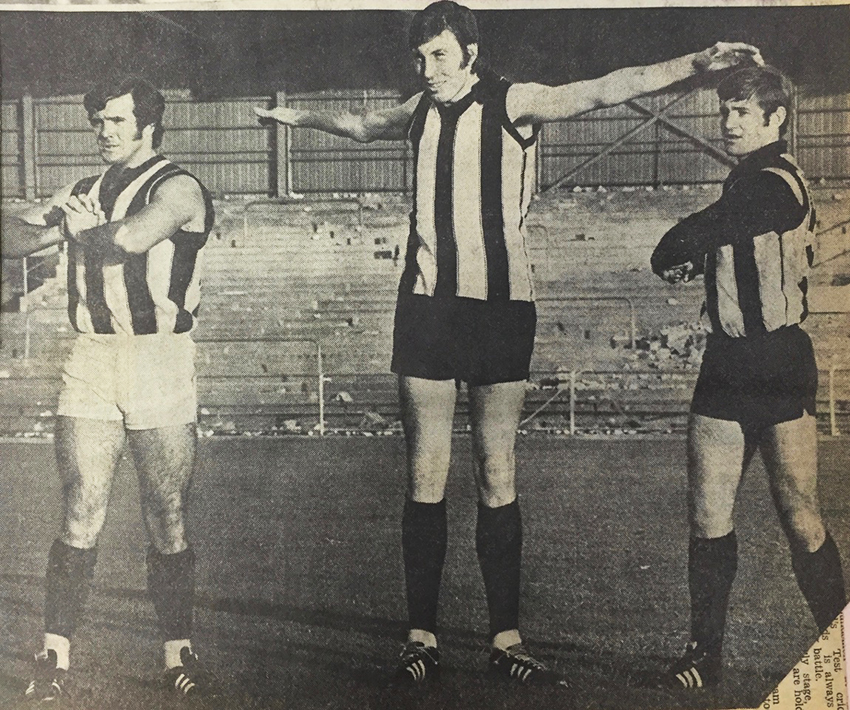 Warming up out on Victoria Park.