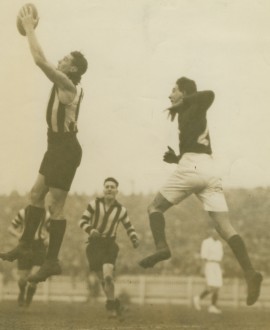 Football in the late 1920s was a tough caper for tough men. And Collingwood was blessed throughout that time with a formidable array of uncompromising, rugged footballers who could not only match it with the best when it came to the physical side of the game, but who were also outstanding players. Men like Albert Collier, Percy Rowe, Ernie Wilson and Len Murphy knew how to play footy – and how to look after themselves.

To that elite group you can add the name of George ‘Kitty’ Clayden. Big, strong, fast and fearless, Clayden was just about the complete package as a footballer, capable of playing either in the ruck or in key defensive posts. He was also one seriously tough hombre.

All of which helped make him a fan favourite at Victoria Park. The Magpie supporters have always loved their players to be hard-at-it, and this seemed to be particularly true in the bleak Depression years. So Clayden’s approach to the game was always likely to win him friends in the Vic Park stands, but it was his brilliant play that made him an indispensable member of the Machine team.

Even so, his “enthusiasm” for the physical contest very nearly derailed his career before it really began. Three times in his first three years at the club he was reported and suspended – four games for kicking in his otherwise stellar debut season of 1924, six weeks on another kicking charge in the 1925 seconds’ Grand Final and eight weeks for crashing into Melbourne’s Bob Johnson in the dying minutes of the Semi-Final in 1926.

Fortunately for Collingwood, Jock McHale was able to temper Clayden’s aggression and school him into using it more selectively. The result was a player who remained feared by opponents but who scarcely missed a game when it counted during the club’s reign from 1927 to 1930.

That was just as well, because Clayden’s ability to play back, forward or in the ruck made him a vitally important player in those Collingwood teams. He was magnificently built, just on 188cm tall and weighing over 80kg, and wonderfully fit, swimming and running competitively during the summer months and being fanatical about physical exercise even outside of official training (teammate Harry Collier was regularly woken on interstate trips by Clayden doing push-ups at 5.30 in the morning!). His height and strength gave him a huge advantage when following or in a key position, but he was also remarkably fast for a big man, having once won a 220-yard event at Kyneton. This combination of pace, strength and athleticism made him a fearsome opponent.

He was wonderful in the air – with a prodigious leap and good hands. About the only thing his game lacked was good kicking. One critic described this aspect of his game as “execrable”, and he even managed a “fresh air shot” one day when kicking from a standing start. There are some who believe that it was only this deficiency that stopped Clayden from being regarded as one of the game’s all-time greats. Still, it didn’t stop him from steering through 79 goals in his 134 games – a reasonable return, given the amount of time he spent in defence.

Clayden always seemed destined to succeed in at least one sport; the question was which one would it be? He was, as already noted, an excellent runner and a good swimmer. He captained both the football and cricket teams at the Spensley Street School in Clifton Hill, near where he was born and raised. And he even gave footy away for a couple of years after leaving school, preferring instead to concentrate on basketball with a team in Williamstown and also with the Melbourne YMCA.

Luckily, he found that he missed football and so returned to the sport in the early 1920s, playing firstly with the local YMCA competition and then with the Abbotsford Cadets. From there he spent two years with Collingwood District, where he forged an outstanding reputation as a follower, and he was placed on Collingwood’s list for 1924.

With a physique that was ready for the rigours of League football from day one, Clayden had an immediate impact; he acquitted himself well against Melbourne star Albert Chadwick in his first game and won a gold medal from the club for the most improved junior player in his debut season. Before long, the Magpies found themselves relying heavily on his electrifying mix of speed, strength and aggression. He became a protector of other players early in his career, relished the rugged exchanges more than most and could always be relied on to stand up when the team needed him.

Clayden’s best year probably came the year after the fourth of Collingwood’s successive flags. He was chosen by Magpie fans as the most popular player of 1931 and awarded the Austral Cup. He also won a bottle of champagne as Victoria’s best player against South Australia that year, further underlining his credentials as a player of true class. However, he injured his knee on the eve of the 1932 season, missed eight weeks and never really recovered, being forced into retirement at the end of 1933.

It was a bitter blow for the quietly spoken Clayden who, like so many of his fellow tough men, was shy and reserved off the field. He didn’t drink, didn’t smoke, attended church regularly and possessed what teammates have described as a wonderfully dry sense of humour. He was sorely missed in all ways at Victoria Park when he hung up his boots – though it’s a safe bet that many of his opponents were mighty relieved when he did so.

This is an edited version of the profile that first appeared in the book, The Machine, by Glenn McFarlane and Michael Roberts.