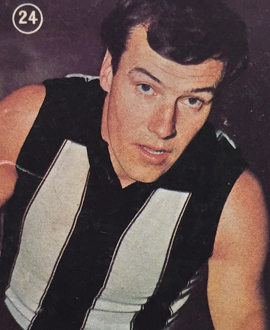 Every football club needs its characters – those larger-than-life guys with infectious personalities who can lift the change rooms and help make footy fun.

That description fits Graeme ‘Jerker’ Jenkin to a tee.

‘Jerker’ was one of the most popular players not just at Collingwood but also in the VFL.

“Everyone loved him,” Peter McKenna once said. “He was a great, happy-go-lucky bloke, and the life and soul of the club.”

His long-time colleague in the ruck division, Len Thompson, agreed, once describing Jenkin as “the funniest guy in the world”.

“He’s the only bloke I know who could walk into a room not knowing anyone and within 15 minutes could be friends with everyone,” Thompson said.

But Jenkin could also play football – and play it well. He was a big, athletic young man with a great leap and good hands when he arrived at Victoria Park in 1962. He was an outstanding cricketer – a feared and unpredictable quick who opened the bowling for Collingwood in District cricket at age 17 – but luckily decided to focus mostly on footy. He first played for the under-19s, then the reserves and eventually made his senior debut in 1964. He struggled to adjust to life as a senior footballer (not helped by missing most of 1965 with a broken leg), and remained an inconsistent presence in the team through most of the 1960s. 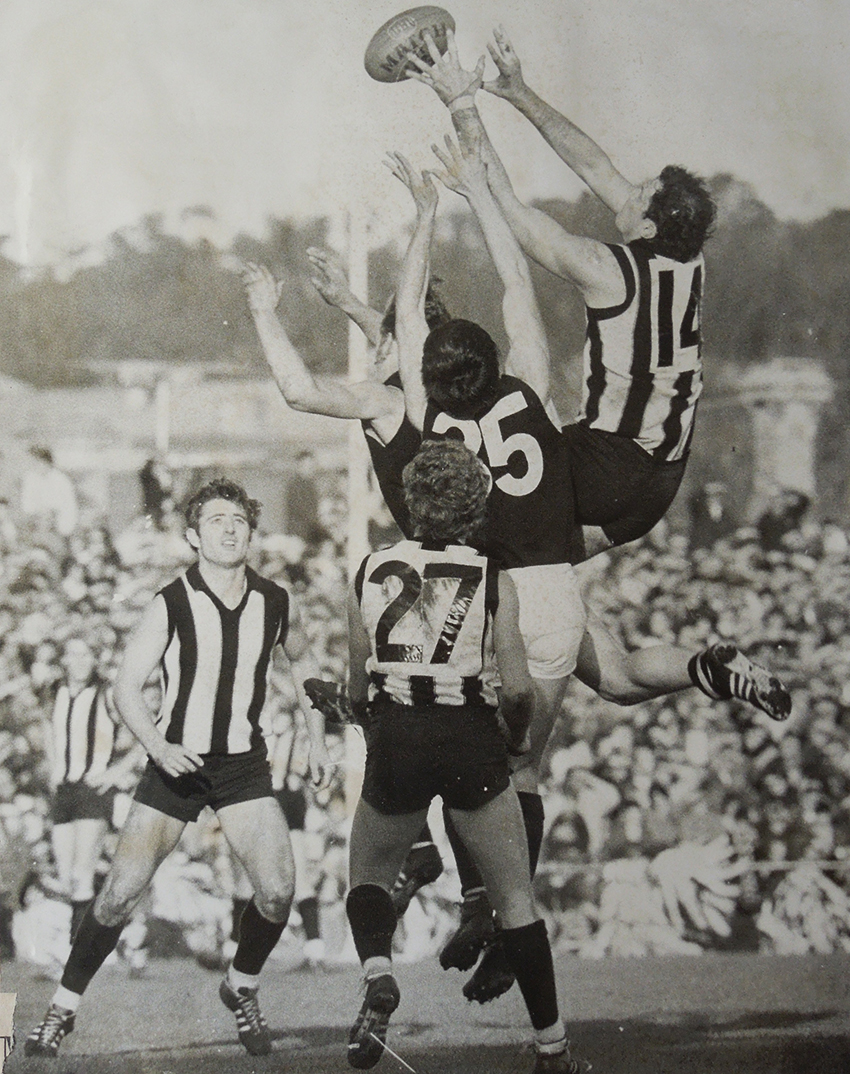 On the fly against the Navy Blues.

But Jenkin’s fortunes turned when No. 1 ruckman Len Thompson went on strike during the 1970 pre-season. The club knew then it had to make other plans for Thommo and Jenkin seized his opportunity. Even when Thommo returned to the fold, the amount of time Jenkin spent in his preferred spot as the team’s main ruckman increased exponentially. And with that increased opportunity, he flourished.

The 1970 season was undoubtedly Jenkin’s best in senior football. He finished second in the Copeland Trophy and won selection in the Victorian team (only to have to withdraw because of a hamstring injury). By then he had settled at a playing weight of around 108kg, to go with his 194 cm frame. He was a big unit on the field.

Despite his size, he had a wonderful natural leap that often saw him soaring for spectacular marks. He also had great, ‘sticky’ hands and an innate palming ability. While the former two attributes were widely recognised the third — his palming — was not. Jenkin’s skills as a tap ruckman were vastly underrated, and easily comparable to those of the acknowledged star, Thompson. 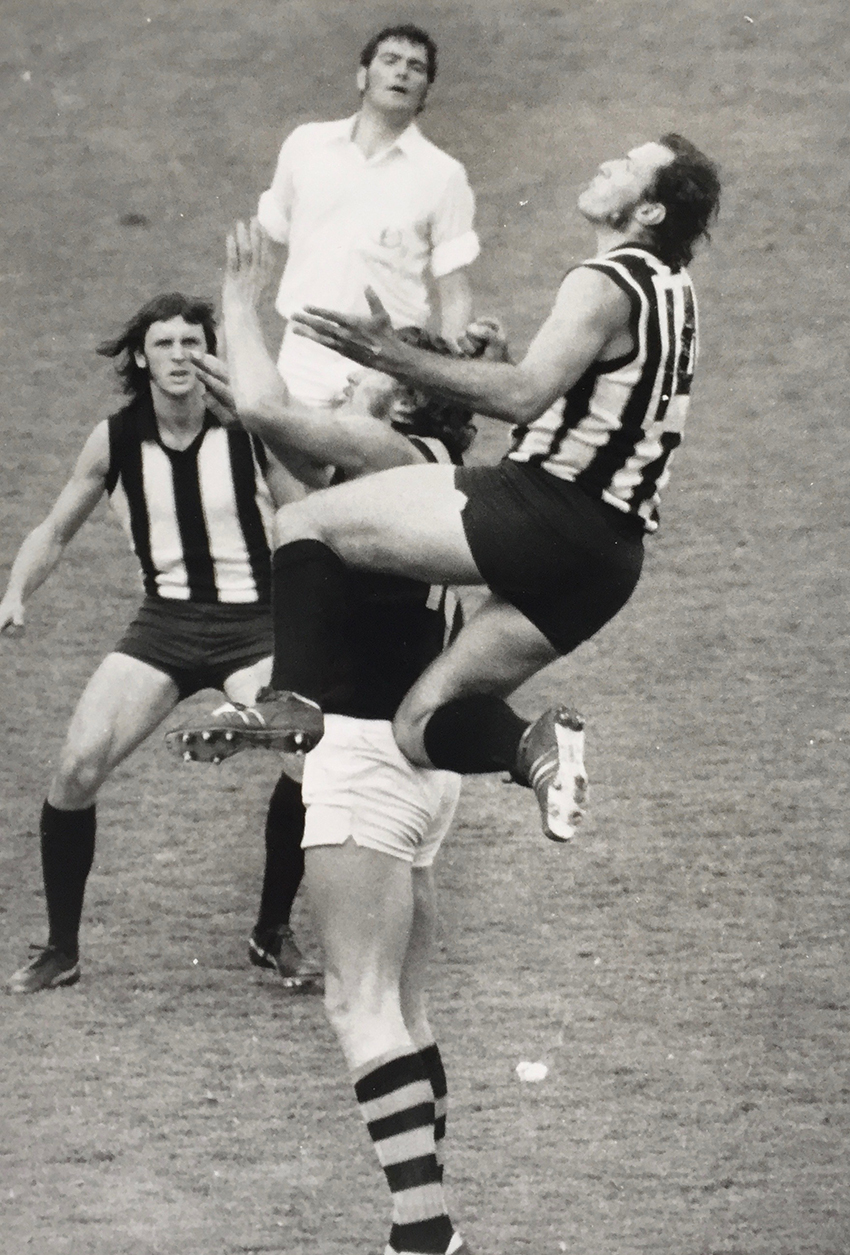 The ‘stepladder’ does some climbing of his own.

Jenkin’s performances in 1970 and 1971, when he carried the burden of being the team’s leading ruckman, were outstanding. His efforts in the 1970 finals were especially good, though many people would best remember him for his role as Alex Jesaulenko’s stepladder for that mark in the grand final.

Jenkin was regularly asked about the incident in retirement – often two or three times a week. In 1991, Melbourne group TISM even made him the subject of a song, “The Back Upon Which Jezza Jumped”. Jerker took it all in characteristically good humour, even developing something of a ‘road show’ with Jezza where they’d recount the moment.

Other than his personality, the thing his teammates most remembered about Jerker was his kicking. Specifically, his drop kicks. Nobody could ever be sure where his drop kicks would go, how far they would travel or whether they would even get off the ground. “They were unique,” Jenkin once said. “I don’t know of any other footballer who kicked them that way.”

The drop kick became a near-lethal weapon when Jerker delivered it. Earlier in that ill-fated 1970 season, a Jenkin special had struck Jezza a sickening blow in what is euphemistically called the groin, prompting The Herald to warn: “One day, if he insists on kicking ‘toers’, he will seriously injure an opponent”. His former coach, Bob Rose, said nobody would stand the mark to Jerker in practice matches – it was just too dangerous. And Peter McKenna said leading to him was impossible: “Some kicks would go 50 metres along the ground, the next one 50 metres over my head.” 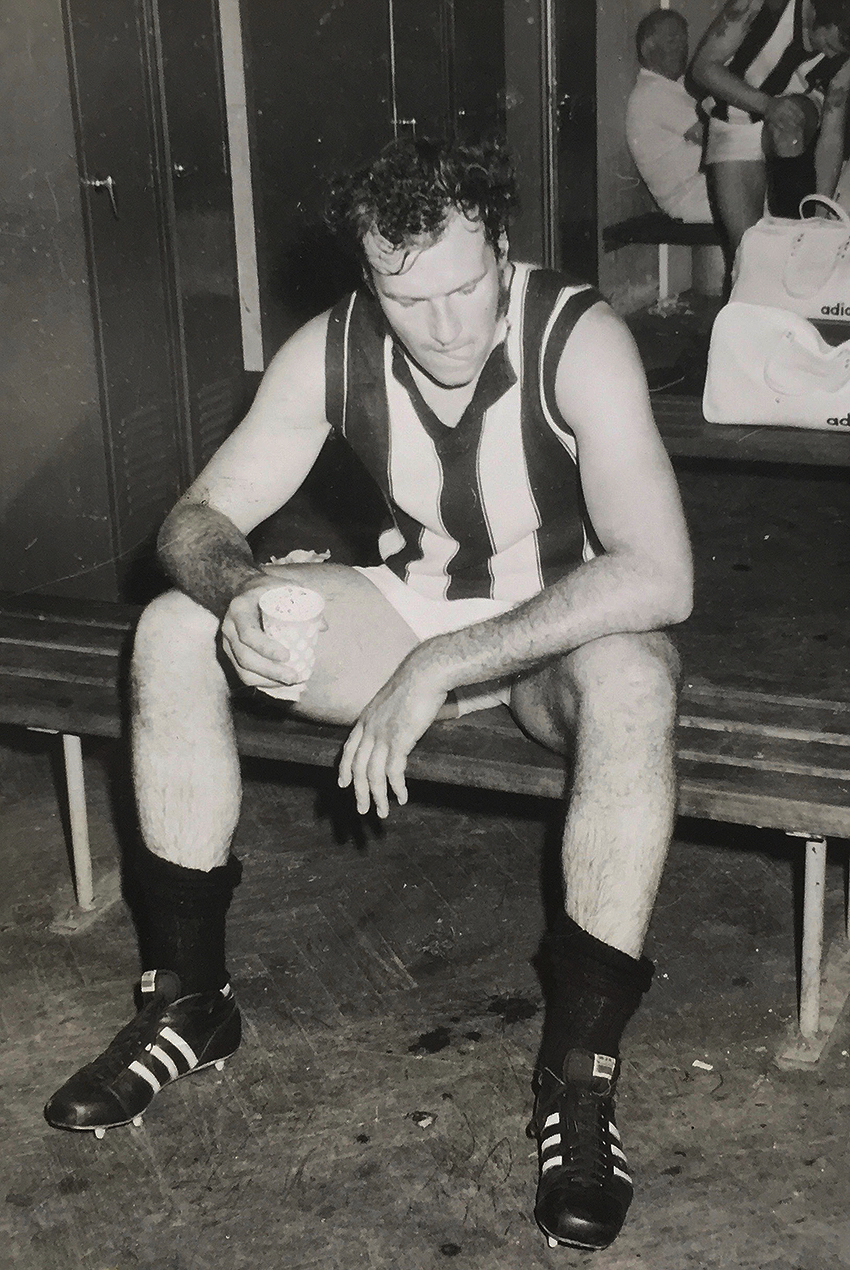 Somehow, this all added up to a loveable, slightly eccentric package of abilities. And Jenkin’s willingness to laugh at it all – especially himself – made it even more endearing. He wasn’t loved by only his teammates: he became something of a crowd favourite too.

Unfortunately, Jenkin didn’t get to end his career at Collingwood. When Neil Mann took over as coach in 1972 he set about rebuilding Len Thompson’s career, but that came largely at Jerker’s expense. He spent fewer and fewer minutes as the team’s first ruckman, and eventually crossed (a little reluctantly) to Essendon at the end of 1973 in the deal that brought Bomber defender John Williams to Victoria Park.

But Jenkin was always a Magpie – he’d barracked for them as a kid – and returned ‘home’ almost as soon as his stint at Windy Hill finished. He later became involved with the Past Players’ Association, where his infectious laughter and welcoming personality were put to particularly good use.

A big man, with a big heart and a big laugh, Graeme Jenkin – footy’s most famous stepladder, and owner of the game’s scariest drop kicks – enjoyed a fine 127-game career at Collingwood. If he hadn’t had to spend so much of it as an understudy to the great Len Thompson, his ruckwork might have achieved more of the recognition it deserved. 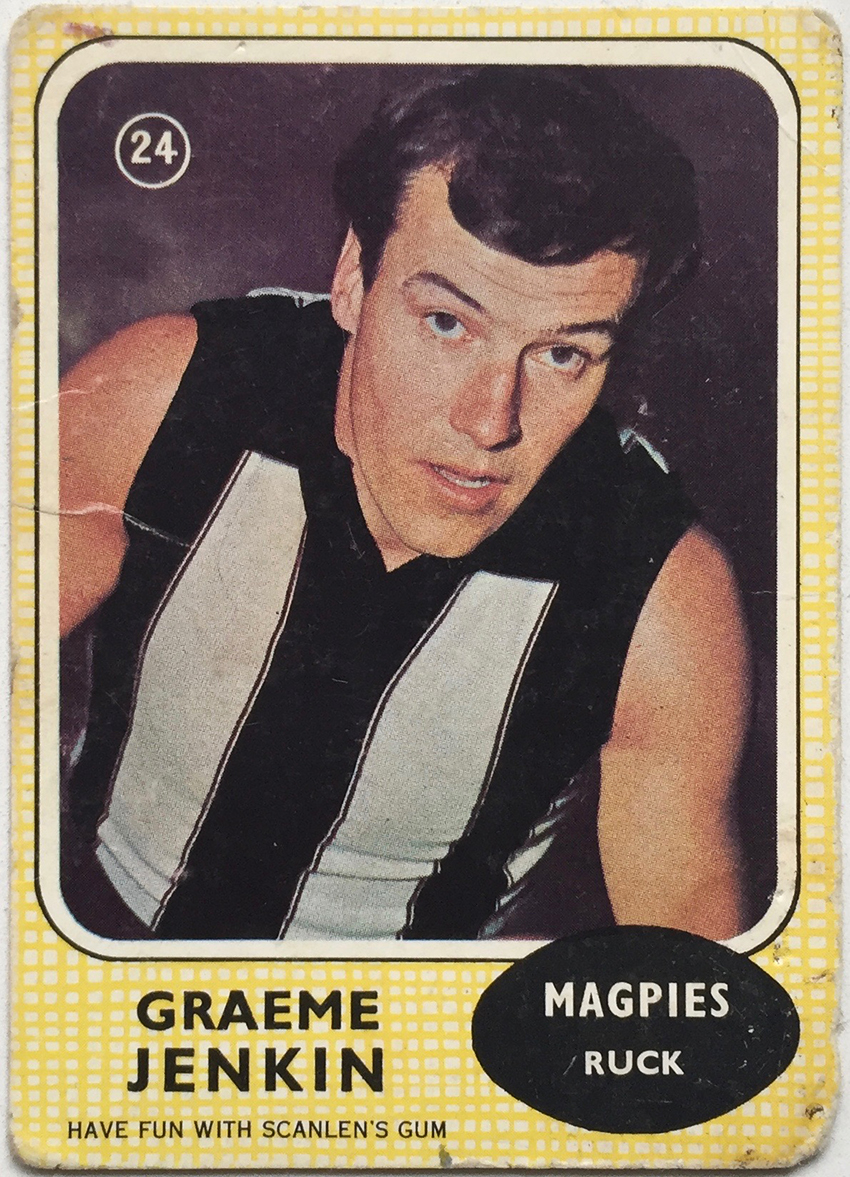