Kevin Grose forces a ball out of bounds as Richmond's Kevin Morris looks on.

Hard as it is to believe, there was a time when not just about every footballer covered his body with tattoos.

Indeed, when Kevin Grose pulled on the Black and White jumper for the first time in the mid-1970s, tatts on footballers were a relative rarity. Kevin Murray of Fitzroy and Richmond’s Robert McGhie had been famous for theirs, but they were very much in the minority. So when the heavily tattooed Grose made his debut in 1975, his body art quickly became a real talking point.

But that was just one of the things that made Grose stand out to the Magpie fans (and also to the media). The other was his fierce attack on the football and his ‘no-holds barred’ approach to the game. Both the tattoos and his style of play quickly endeared him to the Collingwood faithful.

He arrived at Victoria Park from Reservoir Old Boys to play a couple of reserves games in 1974 as a 20-year-old, having won a state guernsey with the Victorian Amateur Football Association that same year. He won the VAFA’s best player award against South Australia and was chosen on the half-forward flank in the all-Australian amateur team. The next year he returned to play eight more games with the Magpie reserves, and his performances there were so good that he also managed a dozen with the seniors. 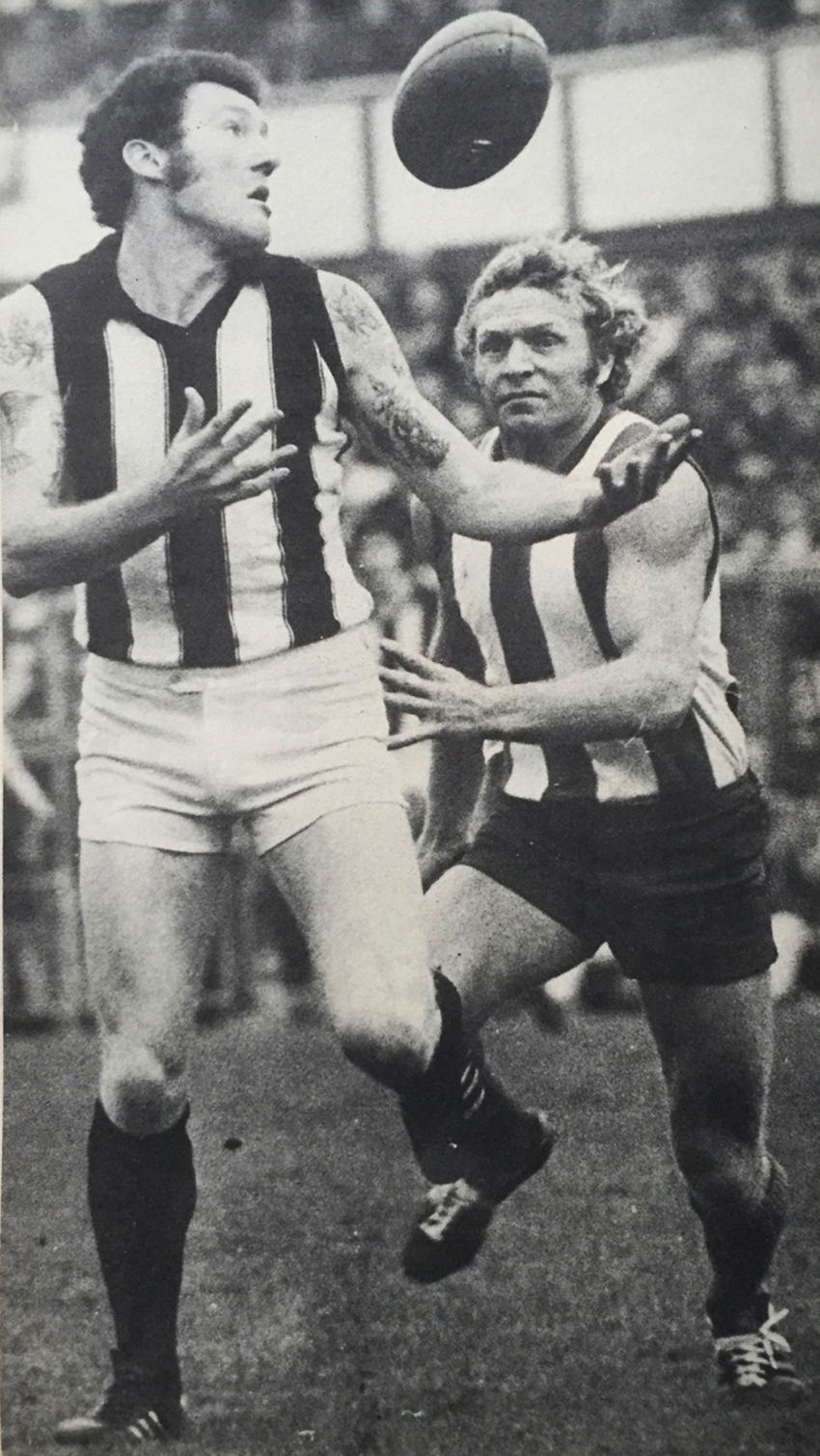 Grose paddles the ball ahead of North Melbourne’s Barry Cable.

Even in those early games he showed the characteristics that would come to define his football – speed, aggression, and a ferocious approach to every contest. He was strong, a good tackler and a really good overhead mark, despite not being particularly tall. And he cared not a jot for big reputations: his first game was against Footscray, and he was named to line up against expensive recruit Peter Featherby. But the night before his debut he told The Sun: “I know nothing about him so what’s the good worrying? My only plan at the moment is to get a good night’s sleep.”

Grose proved quite a handy goalkicker in the reserves (he kicked 20 in his eight games in ’75) and played most of his early senior football as a half-forward flanker. But coach Murray Weideman moved him to the half-back line, where his run could be particularly damaging. He also had more licence there to throw his weight around, and before long even the club was playing up on his tatts-driven image. “Grose is strong, tough and mean,” said a club publication in 1976.

By 1976 he was tipped as one of VFL’s most likely improvers of the season. And so it proved to be. The 1976 season was a disastrous one for Collingwood, marked by infighting, instability and the club’s first-ever wooden spoon. But Grose was a shining light, never giving up despite the team’s increasingly shambolic performances.

“Collingwood supporters have been heartened by Grose’s endeavour even when the side has been hopelessly placed,” noted the magazine Football Life. “While the Magpies have generally spluttered this year there has been one man out at Victoria Park who has matured and given his all.”

The fans could see his effort, and loved him for it. And they, like everyone else, were a bit intrigued by the tattoos, too (he told Lou Richards in The Sun during that year that he’d “lost count” of how many he had after 50, including a pirate ship on one bicep, a cobra on the other and Buddha on his belly). His teammates were so taken by his artworks they nicknamed him ‘Disney’. 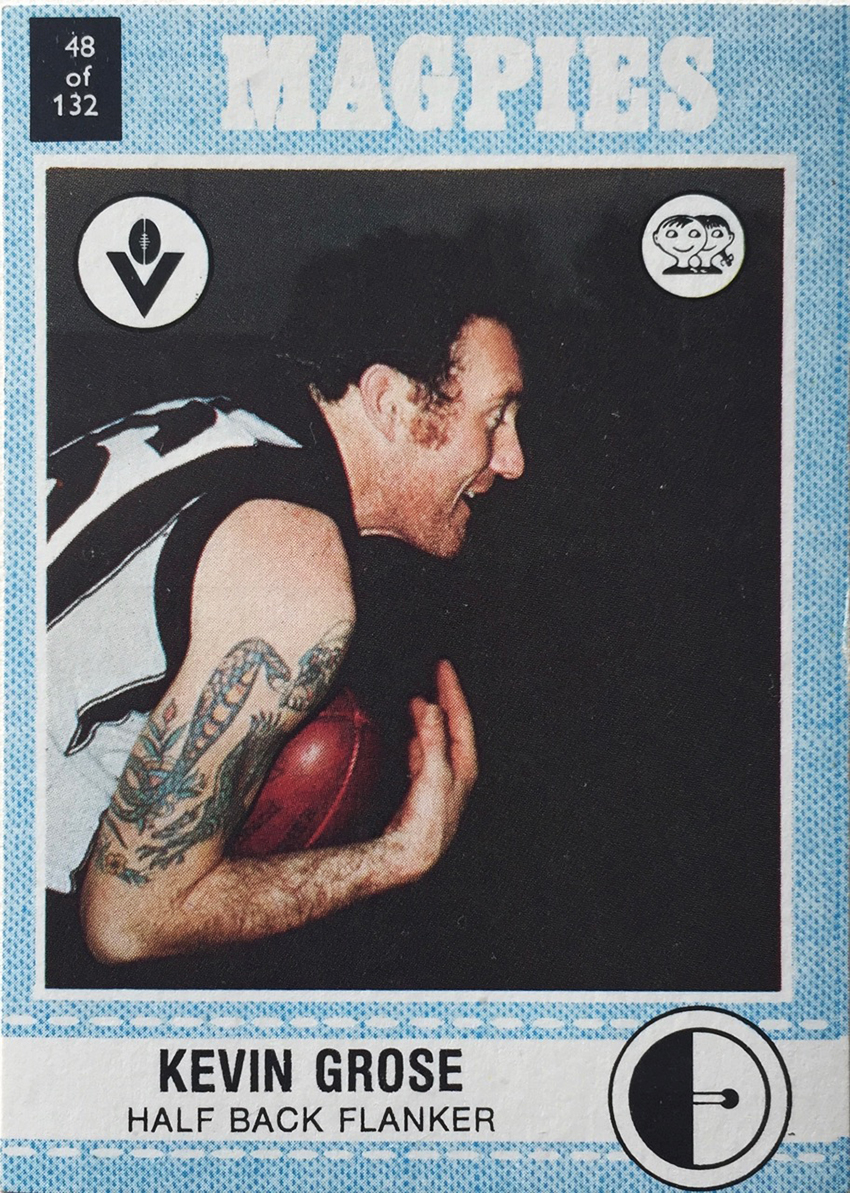 Kevin Grose features on a Scanlens footy card in 1976.

But Kevin Grose was also colourful in other ways. He won $200 early in 1976 as the club’s ‘Player of the Month’ and promptly spent most of it on a party for his teammates. He managed 15 senior games in all that year, and would have played a couple more but for a season-ending broken hand suffered in round 20.

Everything looked bright for Grose heading into 1977. He even got to appear on his first Scanlen’s footy card, with his tattoos on display in full colour. It was a sign of just how popular he’d become in only a couple of seasons.

But then, almost as quickly as his star had risen, it waned. Faced with increased competition from two new, tough hombres in defence in Kevin Worthington and Stan Magro, Grose found himself pushed to the fringes under new coach Tom Hafey and struggled through a handful of games. At the end of the year he headed back to the northern suburbs, as captain-coach of North Heidelberg in the Diamond Valley Football League, where he led his team to their first flag in 16 years (he also topped the DVFL’s goalkicking table that year with 80 goals). He stayed playing suburban football and became a well-known figure in the DVFL, eventually being named in North Heidelberg’s Team of the Century.

Sadly, Kevin Grose died of a heart attack while on holiday in Thailand in 2012. He was just 58 years old.