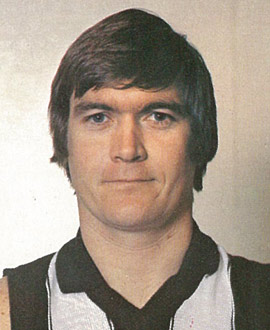 Kevin Worthington was precisely what Collingwood needed after a disastrous 1976 season – a tough uncompromising defender and a loyal teammate who knew no other way than playing hard on and off the field.

Fittingly, he joined the Magpies in the same year as the man who would become his great mate, Stan Magro, who also came from Western Australia.

Collingwood was in the midst of significant change when the pair decided in 1977 to chase VFL careers on the other side of the country. The previous year had brought about an unwanted first wooden spoon, but newly appointed coach Tom Hafey was confident the club had the nucleus of a very good side, and with recruits such as Worthington, Magro and a kid called Ricky Barham, the future was looking brighter.

Worthington, a thick-set defender who was rarely beaten one-on-one, came from the fertile football region of Geraldton, before graduating to Claremont in the WAFL over six seasons, from 1971 to 1976.

Hafey wrote a letter to Worthington explaining how he would fit into the club, and he knew he had to make the move across the Nullarbor – with or without a clearance.

Worthington recalled: “Tommy said he would like me to come over”, and the club’s solid relationship with Claremont – who had recruited former Magpie Barry Price a year earlier – meant a deal could be arranged.

An article in The Age in March, 1977, the week after Worthington had impressed in a practice match against St Kilda and Kevin ‘Cowboy’ Neale, suggested the 189cm, 88kg backman had “adapted to Collingwood’s training under coach Tom Hafey quickly”. It was even forecast that he and Magro, who were already tight mates, were “set to make big names for themselves here.”

Almost seamlessly, Worthington slotted into the Collingwood back half, playing in the back pocket or full back, and making such an impression that he played every game of the 1977 season, a remarkable year when the Magpies started the year as wooden spooners and finished the home-and-away season as minor premiers.

His form was such that he was a member of the Western Australian team that took on – and beat – Victoria in the first State of Origin clash in 1977. It would remain one of Worthington’s three biggest career highlights, alongside playing his first game for Claremont and playing in Grand Finals for Collingwood.

The Magpies played out a remarkable draw with North Melbourne in the 1977 premiership playoff, after Ross ‘Twiggy’ Dunne slotted through a late goal to level the scores. Worthington and others were confused about what the draw actually meant before it finally dawned on them that they would have to go through it all again the following Saturday.

He recalled heavy rain early the next week “churned up” Victoria Park and he could barely raise his legs after a particularly tough training session on the Thursday before the replay.

“We found out (North) were playing table tennis and billiards and just having get-togethers to talk about the game, while we were busting our backsides,” he reflected later. “I think some of the senior blokes tried to tell Tommy he wasn’t going to get us any fitter and we needed to freshen up. But he was going to do it his way.”

The Magpies lost the replay by 27 points, the same margin they had led by at three-quarter-time the previous week.

Worthington’s ferocious attack on the ball endeared himself to Collingwood supporters who admired his passion. And his love of a good time away from football also made him one of the club’s most popular players.

He was rated by many teammates as among the toughest players they played well. Ray Byrne called him “fearless … it wouldn’t matter where the ball was, he would go and get it.”

Worthington joked years later that he liked to keep Monday nights free – particularly after Carlton games – just in case he had to front the tribunal. He would say: “You knew you’d get done (reported) for whacking someone or being hit yourself. It got to the stage where a bunch of blokes would appear before the tribunal after every match.

“We’d toss a coin to see who went and got the carton of tinnies to sip while waiting to be called.”

Worthington loved having good time off the field, with Barham saying: “I was a new boy at the club along with Stan Magro and Kevin Worthington. We all got on well, but they did teach me some terrible things.”

Tony Shaw recalled how at his first after-match functions he happened to be in a drinking school with the pair. “(We) all downed our drinks, but instead of handing me their glasses and saying ‘Your hook’, Stan bit the top of his glass and ‘Wortho’ smashed his on his head. I was absolutely stunned. Handing me the remains of their glasses, they said: ‘Now it’s your shout’.”

Their good humour saw them fool Hafey during one running session around the Boulevard in Kew. They clearly broke their personal best time, sweat pouring off them as they ran back into Victoria Park. It wasn’t until a week later that Worthington revealed they had sat underneath the Johnston St bridge and wet their clothes before sneaking back to the ground.

He wasn’t a regular goalkicker, but managed to score a major in his 50th game, in the round four clash with St Kilda. That game, which marked Peter Daicos‘ first game, brought about a 178-point victory and it remains the biggest in the club’s history. His best return was four goals when he was sent forward in a game against Fitzroy in 1978.

Collingwood came agonising close again to a premiership in 1979, but fell five points short against Carlton in the Grand Final. That could well have been the end of Worthington’s career in Black and White.

Knee trouble brought about a return to Perth in 1980. He said: “I came back (to WA) in 1980 because I had a knee operation and there were doubts whether I’d play again.”

But he stepped out for Claremont and that gave him the confidence to return to Victoria Park in 1981 in the chase for that elusive premiership. He managed 18 games in 1981, yet missed Collingwood’s last two finals, including the Grand Final loss to Carlton.

And while he hadn’t played in that game, he was still a part of the folklore surrounding a story in the time after the Grand Final, involving Blues premiership star Wayne Johnston. Johnston would reveal how he was in the cubicle of a toilet in a Caulfield nightclub when he heard Worthington and Magro planning their retribution for what he had done in the game.

Johnston said on radio decades later: “I didn’t come out of the toilet for about 30 minutes because I thought they were still out the front, that they saw me walk in. But it turned out it was just pure coincidence that I was in there at the time. They were talking about assassinating me before the 48 hours were up. (Finally) I stuck my head out around the corner and bolted home.”

Worthington’s body was failing him by the time of the 1982 season, his last for Collingwood. He managed only eight games in that fractured year, and he and Magro chose to return to WA after the New Magpies reform group came to power and promised significant change.

The two mates played two seasons with East Perth, taking his WAFL tally to 129 games, to match his 95 games (and 19 goals) in his five seasons at Collingwood.

Magro signed on to coach WA country side Wagin after that, and he talked Worthington to join him. Fittingly, the two mates who desperately craved a premiership managed that in a team that wore black and white, and went by the Magpies moniker. That was a suitable end to Worthington’s playing career.

He was an assistant coach to Magro at East Perth in 1992-93, and coached that same club from 1996-99, leading them to a Grand Final in his first season, losing to his old side, East Perth, by two points.

One of his players from that Grand Final – Rupert Betheras – would later become a Collingwood cult figure across his five seasons of playing with the Magpies.