Leigh Brown was the unlikeliest of prototypes.

He was rising 27 when he came to Collingwood in 2009, almost universally described as journeyman having already played 181 games with Fremantle and North Melbourne, and had played in just about every position on the field without truly owning one.

He had a chunky frame, and could have benefitted with a few more inches to add to his 194cm frame, but no one could ever question that he was a competitor, first and foremost.

Collingwood website forums were sceptical when Brown’s name was called out as pick No. 73 in the 2008 National Draft after being delisted by the Kangaroos following an extended stint in their VFL side. Even in his infancy in Black and White, when the issue of tanking was raging, a throw-away line from AFL chief executive Andrew Demetriou – “Leigh Brown played on Jonathan Brown the other night … was that tanking?’ – questioned his position in the team.

Fast forward to the end of the 2010 season, and Brown had not only cemented his place in the team, he had enshrined it in Collingwood’s history. And the icing on top of a premiership cakewalk was that he had also played a unique part in establishing a template for the rest of the AFL competition.

In playing that role, as an undersized but physically strong forward/back-up ruckman to Darren Jolly, he also become a cult figure of sorts to the Black and White army, and remains one now well into his retirement. 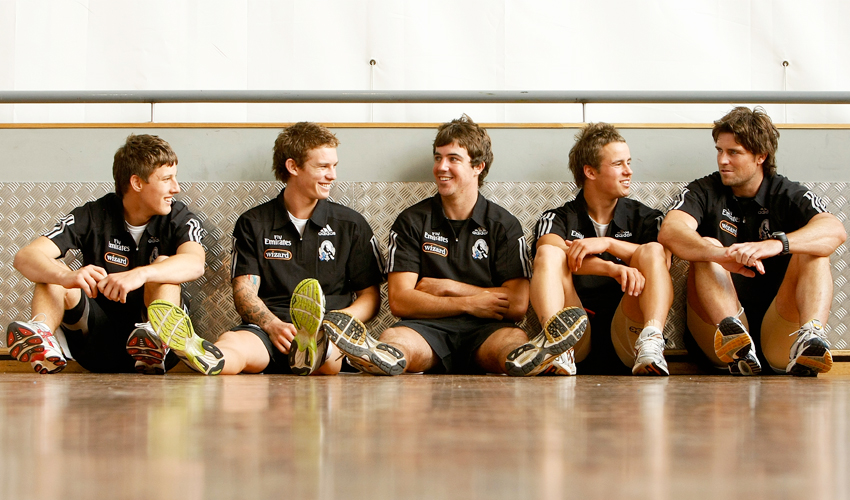 Mick Malthouse saw the competitive streak that coursed through Brown’s veins, and crafted a role for him. He explained: “I thought, ‘this bloke’s still going around and can play league football? He can take a nice catch; he kicks the ball OK; he plays at either end of the ground.’ I couldn’t really work out why he would be discounted in the ranks of perhaps being able to play a role within any organisation.”

Originally from the timber and dairy farming hamlet of Heyfield, a community of less than 2000 residents, Brown had come to prominence with Gippsland Power in the TAC Cup. He was drafted by Fremantle as pick No. 5 in the 1999 National Draft. He won a Rising Star nomination in his debut year of 2000, missing only one game for the year. But after three years and 63 games, he was traded to North Melbourne where he became a defender who could go forward, or vice versa, across six seasons and 118 more matches.

That could well have been the end of the Leigh Brown story. But when he was delisted by the Kangaroos, Malthouse figured he was worth a late draft punt after impressing in some pre-season training with the Pies.

Brown only required a chance: “A journeyman is how everyone describes it, but to me it’s more about having a new opportunity and playing at the best level you can.”

Most assumed he would take up a defensive role, given the retirement of Shane Wakelin. He did, for a time. But Malthouse began to use Brown more in attack, as well as offering some coverage as a back-up ruck option.

Brown reached his 200-game milestone in round 20, 2009, and finished the season with 10.17, with his goal-kicking accuracy at times causing fans some concern. Still, he played in all three finals that season, including kicking a towering 50m goal in the club’s Semi-Final win over Adelaide.

Brown played on the edge, never feeling secure about his position within the team. Just to emphasise this, after playing the first four games of 2010 without registering a goal, he was dropped back to the Pies’ VFL side. 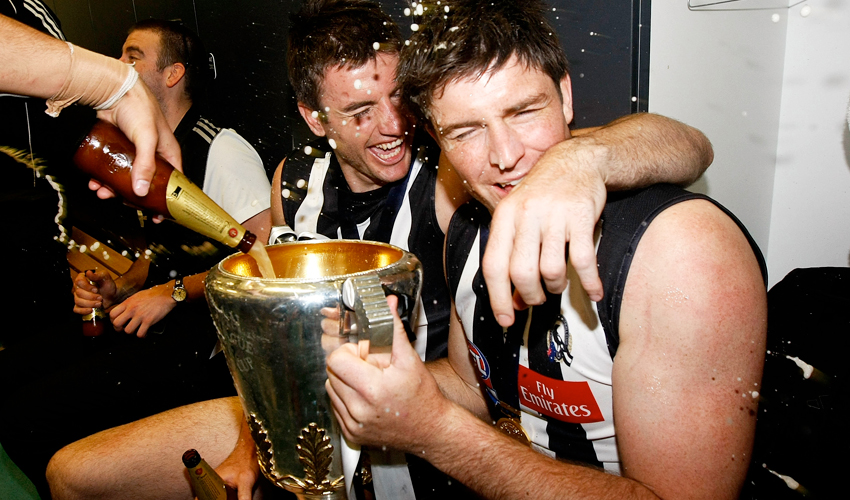 It wasn’t until the round 11 clash with the Western Bulldogs that he won his spot back again, but other than a short suspension served near the end of the home-and-away season, he wouldn’t look back again. Neither did the Magpies. He played in only one loss (round three) from his 19 games that memorable season, courtesy of his redefined role.

He played the role so well that it kept Josh Fraser out of the senior team for all but game in the second half of the season.

Malthouse preferred the combative Brown over Fraser when it mattered. It worked so well that the one-time unfashionable footballer quickly became a versatile trailblazer for the rest of the competition. Some people dubbed it as “the Leigh Brown role.”

He had almost 100 hit-outs that season and his pressure, tackling and pack-crashing in the Magpies’ front half proved crucial in many instances.

He hit the scoreboard, kicking 21 goals to silence those worried about his accuracy. Two came in the Qualifying Final win over the Bulldogs, and few will ever forget his booming goal against Geelong in the Preliminary Final.

Brown thrived in the role, saying: “I’m not sure we can classify it as a Leigh Brown role, but I guess everyone’s got to be more versatile.”

Nick Maxwell explained: “He (Malthouse) copped a lot of flak for backing in ‘Leroy’. Mick made people eat their words. Now all clubs seem to be talking about needing a Leigh Brown-type as a second ruck.”

Never mind the fact that Brown didn’t kick a goal in either Grand Final in 2010 against St Kilda – the thrilling draw or the one-sided replay. In the drawn game he took an important mark in the last quarter, had 13 touches and laid five tackles. In the rooms after the game, complete with swollen eye and ice packs applied to both legs, he described the feeling was “surreal … it would have been great to win, but it wasn’t to be. We’ll saddle up next week.”

Brown had the first kick of the replay the following week, driving the ball long into attack. Once more, he had 13 disposals, but as was always the case with Brown, he contributed far more than pure statistics can measure.

He was rewarded with a premiership medal that looked so unlikely only a few years earlier, and with it came the admiration from a grateful Collingwood army who had taken him to their collective hearts.

Yet he wasn’t satisfied with that. Brown took his game – and his role – even further in 2011, as rival clubs looked to mirror Collingwood’s second-ruck strategy, particularly with the introduction of the sub rule that year.

He kicked 23 goals for the season – his most in an individual year – with four goals against the Western Bulldogs in round six his best display in what was a blistering start to the season for the club.

On the eve of the 2011 finals, Brown dropped a bombshell, announcing he would retire at the end of the season. He was only 29, and still a crucial member of the team. Malthouse was “staggered” by the decision. 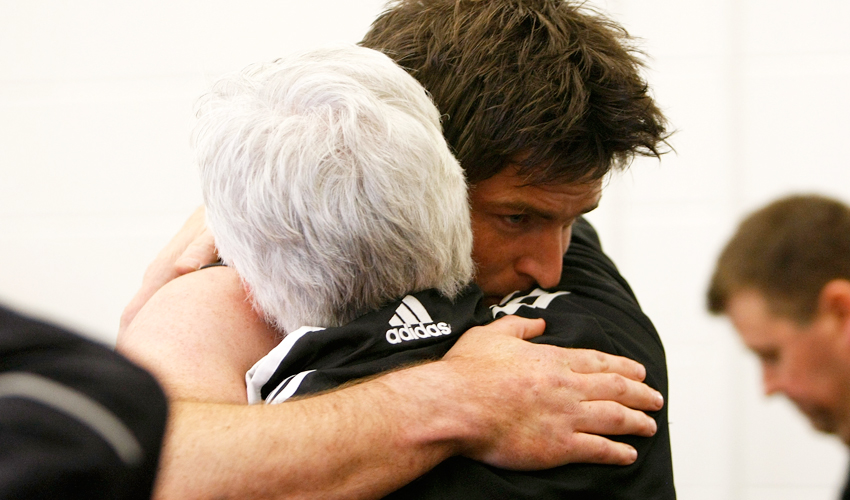 Leigh Brown and Mick Malthouse embrace after the 2011 Grand Final loss. It was their last match as Collingwood player and coach.

But Brown resolved to give it everything he had during the finals. He kicked a goal against West Coast in the Qualifying Final and another major halfway through the third quarter of the Grand Final against Geelong, which regained the lead for the Magpies. But the fairytale ending was not meant to be. The Cats ran away with the match in the final half hour.

That closed out his 246-game, 138-goal AFL career. Sixty-five games and 54 goals came in a Black and White jumper. This journeyman had finally found a home – and a role that he relished.

Such was the esteem in which he was held that he was presented with the Darren Millane Memorial Trophy as best clubman as a farewell gift. With that also came life membership, a reward for Collingwood premiership players.

Brown embarked on a coaching pathway after retiring, spending two years as an assistant at Melbourne before seeing his career return full circle when he took over as coach of Gippsland Power.

The Magpies struggled for a time afterwards in getting the right balance for their second ruck option. Sometimes you don’t truly appreciate something until it is gone. 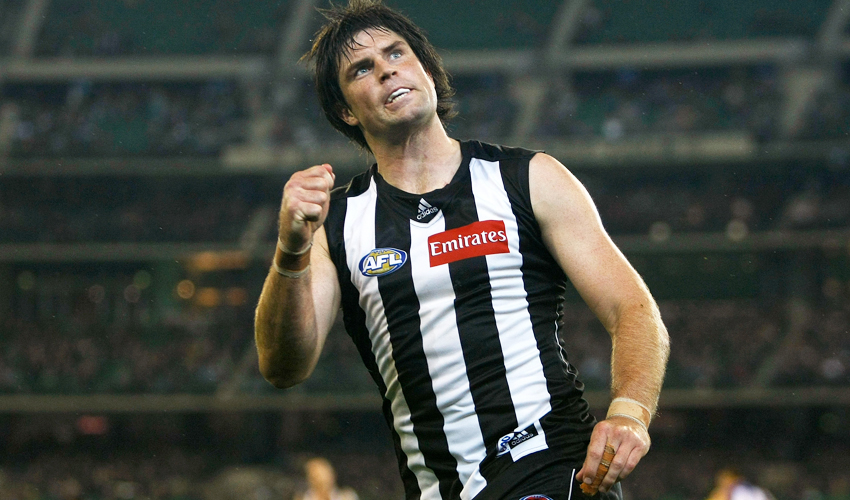 Celebrating four goals against the Western Bulldogs in round six, 2011.