Thirteen and a half seconds. That is all Phil Manassa took to transform his standing in the hearts of Collingwood supporters from one of honest battler to one of cult hero.

Halfway through the final quarter of the 1977 Grand Final Replay Collingwood was heading for defeat and Phil Manassa seemed destined never to be regarded as anything more than a gutsy, determined, aggressive utility player. Then Wayne Gordon tapped the ball across to the running Manassa on the half-back flank. He tucked the ball under one arm and charged up field like a rampaging bull. He bounced the ball once, twice, three times, faked a handball to elude a North Melbourne opponent, bounced once more then slotted home an angled shot from more than 50 metres. It was one of the greatest individual goals ever seen, and it so exhausted Manassa that he could barely make it back to his position in defence.

In the short time it took him to charge from half-back to half-forward Phil Manassa secured himself a permanent place in Collingwood’s history. Manassa was already something of a fan favourite, largely the result of his ‘full-speed ahead’ approach to footy. But his grand final run – even though, like Ray Gabelich‘s run in 1964, it was ultimately in a losing cause – took that popularity to a new level.

Ironically though, it took some time for the significance of Manassa’s achievement to dawn on the man himself. “I was just buggered,” he said later. “All I could think was that we had a chance to win and that I had to get back on (Malcolm) Blighty. After the game everyone was walking past and patting me on the back, saying it was fantastic, but I couldn’t comprehend it — I just didn’t think it was anything special. It’s like taking a big ‘specky’ mark — you never know how good it is until you see it yourself.”

Still, that’s exactly the kind of mark many people thought Phil Manassa would leave on League football, for he was an incredibly successful junior footballer.

Born and raised in Ivanhoe, he had been a junior star since he first pulled on the boots as a nine-year old. As a centreman with an eye for goals, he racked up numerous club and competition best and fairest awards — one season picking up 149 votes out of a possible 162! He represented Victoria at under-16 level for two years, the second as the vice-captain. At each of those junior carnivals he won Victoria’s best player award, ran second in the competition voting and was chosen in the All-Australian team. He also excelled in other sports, representing his school in everything from volleyball, baseball and soccer to hockey, basketball and cricket. 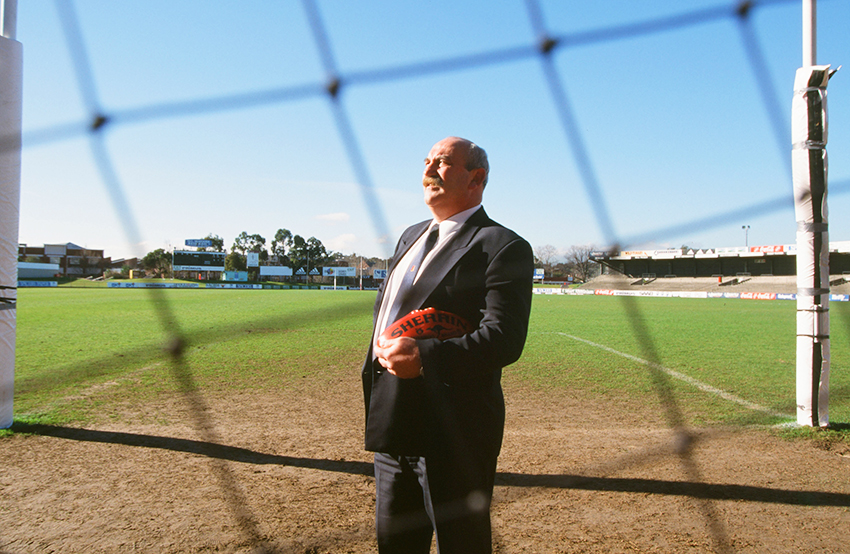 Phil Manassa returns to Victoria Park for an AFL Media photoshoot in 1998.

When Manassa started attending Heidelberg High School, he found that two of his teachers were Collingwood players Lee Adamson and Ted Potter. They would soon be teammates. Indeed Manassa had a way of making many of his teammates feel a little old; both Wayne Richardson and Barry Price had conducted primary school football clinics a few years earlier in which Phil took part. He never missed a chance to remind them of the fact.

Manassa made it to the supplementary list in 1972, kicking 37 goals in 14 games with the under-19s, including one haul of six, and also playing a few games with the reserves. Early in 1973, aged only 17, he made it into the senior team as a reserve against Geelong, and a couple of weeks later earned himself a place in the starting 18. In all he played 13 games that year, but started on the bench in nine of them.

By 1974 Phil was an established part of the starting line-up and took part in all 24 games, one of only three players to do so. He played most of those in the back pocket, but through his career he proved extremely versatile, playing everywhere but in the ruck (he once even kicked 1.8 from full-forward against Hawthorn). The word ‘utility’ was rarely more apt than when applied to Manassa, and Collingwood knew it would get good value from him wherever he was placed.

Ironically for one who always fancied himself as a goalkicker, and who admits he was never really “turned on” by playing in defence, Manassa spent much of his career in the defensive half of the field. His dashing, straight-ahead style of play was perhaps at its most effective when running off the back line. But no matter where he lined up you could be sure Manassa would approach his football the same way — at full throttle.

He was not a graceful footballer by any means, but he was effective. Burly of build but possessed of fair pace, Manassa was a hard man to stop when he built up a head of steam. He approached the ball aggressively and did not shirk physical confrontations, believing if the ball was there to be won then nothing else mattered. He had a fanatical will-to-win and a desperation in his play that was twice rewarded with the club’s “most determined player” award. A booming kick and a safe mark, he was always creating options for his teammates. Even in defence his was an aggressive, attacking approach, and he was never content with merely playing safe.

Although he became a Collingwood regular, Manassa never quite took the game by the scruff of the neck in the way that his junior career had led some to expect. Nonetheless, by the end of 1978 he had strung together more than 100 games and was one of the most experienced players in the team. But 1979 turned out to be a poor year for him. He played only 10 games, spent time in the reserves and generally seemed to fall from favour. There are some who believe that Manassa’s love of a drink and a smoke (he did like to enjoy life), did not go down well with the dedicated Tom Hafey. Whatever the reasons, the club did not stand in his way when a business opportunity tempted him to Tasmania at the end of 1979. Incredibly, he was only 23 when he played his last League game.

Collingwood leased him to Devonport for two years, and he then spent four years coaching and playing in Sydney, then three more in New Guinea after he was transferred there by his employers, Rothmans. In 1989 he returned to Sydney, and in 1990 came home to play with St Leo’s in a church comp — still of an age less than some playing VFL football.

Wherever he went through that nomadic phase of his life, people always wanted to talk about “The Run”. When Collingwood left Victoria Park in 1999, it was one of the highlights recreated one final time. Even today, the winner of the AFL’s Goal of the Year is awarded the Phil Manassa Medal. In a game renowned for its spectacular individual moments, Phil Manassa’s 1977 run-and-goal will always stand as one of the most memorable of them all.

This is an edited version of the biography that appeared in the club’s centenary book, A Century of the Best.