Collingwood has known no bigger – in all senses of the word – or more loved character than the man known as ‘the Bear’, Ray Gabelich.

In a colourful and controversial career he played more than 150 games, won a Copeland Trophy, played interstate football for both Victoria and WA, was threatened with banning from the VFL, faced court on charges of assaulting police, won the Collingwood captaincy and then lost it because of concerns over his weight. In anyone’s language, that’s a hell of a footballing journey.

That journey began in WA. His father was born in Australia but taken back to Yugoslavia as a baby and raised there. When he returned to Australia as a young man he soon found himself in love with the local brand of football, and son Ray played from an early age.

By the time he was 18 Ray was a promising ruckman playing with the Mt Hawthorn team, the ‘feeder’ club for West Perth. In 1951, when Collingwood travelled to South Fremantle at the end of the year for some exhibition matches, the locals organised a couple of combined junior teams to play the curtain-raiser. Gabbo was among those selected. In 1953 he again won selection in a WA combined junior team that visited Melbourne and played Collingwood thirds and a Preston District team. Gabbo starred and the Magpies invited him across, but he decided to stay in WA and have a crack at playing with West Perth, the team he’d supported as a kid.

But a residential dispute erupted (he’d spent time living in both West Perth and East Perth territory), which the WAFL ‘solved’ by making the bizarre ruling that he couldn’t play for either club in 1953! When the League repeated its ruling in 1954, a disillusioned Gabelich headed east and tried to play with Collingwood, but was stymied by residential qualification criteria which meant he could only suit up with Parkside Amateurs.

Finally, after two frustrating years, Gabbo debuted with Collingwood early in 1955 (having survived a work accident where he lost the top joint of his right middle finger). At this stage the young Gabbo possessed a strapping physique that was the envy of all his teammates. He stood 193cm (6ft 4in) and tipped the scales at about 92kg (14st 7 lb), with not an ounce of superfluous body tissue to be seen. Bob Rose said that, in those days, Gabelich was “as fine a specimen of physical athlete as you would see”. He was a magnificent athlete who was surprisingly agile and skilful for a man of his size. He was also a marvellous tap ruckman and, as might be expected, a fine mark with a big leap.

His size was always the dominant factor in his play. He was big, immensely strong and powerful – and very difficult for opposing rucks to combat. His courage was never in question – he once walked off the ground after breaking his leg – but he perhaps lacked the ‘mongrel’ many big men possess. But Gabbo was a gentle giant who could change neither his game nor his nature. 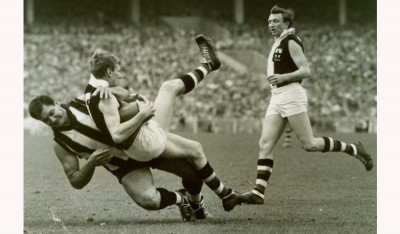 There was no sign of Gabelich the ‘gentle giant’ during this game against St Kilda.

That says much about Gabelich the man. His uncomplicated, placid nature, easy-going approach to life, and his love of living, made him great company and one of the most popular blokes in football. As Herald writer Alf Brown once noted: “Gabbo has always been a lovable character — even the opposition liked him”. He was even more popular with Collingwood supporters, who warmed to him from the very beginning and whose affection seemed to grow in step with his waistline.

He became a regular in 1956, and topped off a great year with selection in one of the teams that played an exhibition match at the Melbourne Olympics. The broken leg saw him miss most of 1957, but consistent football in the next two seasons brought interstate selection and second place in the 1959 Copeland Trophy.

For a placid character, Gabbo seemed to have an uncanny ability to draw headlines. In the summer of 1959-60, he jeopardised his entire football future by playing in an unauthorised local competition in Darwin, prompting threats of a 12-month suspension and loss of provident fund money. He returned to Melbourne, won the Copeland Trophy – then sensationally decided that he would return to WA to fulfil his dream of playing with West Perth. So well did he perform that he was chosen to represent his home State in the 1961 carnival, winning an all-Australian blazer and the Simpson Medal for best WA player.

Late that year police charged him with resisting arrest and using indecent language after a Christmas party in Footscray. Gabelich in turn countercharged the police with assault. In the end the court found only that he had used indecent language but imposed no penalty, saying police had magnified a minor matter into a major incident. 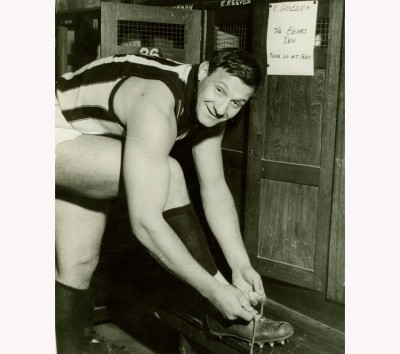 ‘The Bear’s Den’. Gabelich stands in front of his locker.

“The Bear” was nothing if not unpredictable. After one year in WA he returned to the VFL. He was named captain of the Pies in 1964, the year of his legendary grand final run. The sight of the man-mountain charging the 50 metres towards goal, bouncing the ball, losing it, reclaiming it and finally kicking the goal from the square before almost collapsing on to one knee was one of the most inspirational in football history. If there was any justice in football that goal would have won the game.

In 1965 he was again appointed captain but the season turned into a disaster even before it started. A nasal operation interfered with his pre-season, then he had his appendix removed. By the time he returned to the fray mid-season he had put on a bit too much “condition”, even for Gabbo. Although he tried to regain fitness and form, a back injury retarded his progress even further. Eventually he handed the captaincy to John Henderson.

Gabbo’s weight had always been a contentious point. Over the years it had ballooned to an official 17 stone (108kg). By the end of 1966, aged 33 and conceding a playing weight of more than 120kg, he decided to hang up the boots. “Football,” said one newspaper, “won’t be the same without him”.

Over the years, many players have come to the VFL from interstate with big reputations, and returned with reputations in tatters. Ray Gabelich was the reverse. He arrived under his own steam as an unheralded recruit who had not played senior football in his home State. By the time he retired with a distinguished career behind him, he was a true Collingwood favourite, and one of football’s best known and most loved personalities.