He was built so strongly that he was nicknamed “the Incredible Hulk”, but was quick enough to burst through traffic and away from flailing opponents. He could fly for big marks, kick long goals with his left or right boot with casual nonchalance, and tackle so hard that you wondered how his victim ever got up. He advertised oranges. And he had a starring cameo as Magpie strongman Tank O’Donohue in the film version of David Williamson’s The Club.

No wonder so many Collingwood fans loved Rene Kink.

Almost from the moment he burst onto the scene as a 16-year-old in 1973, Kink was a crowd favourite who carried the burden of expectation that he could be the excitement machine Collingwood so desperately wanted. In the years that followed he thrilled and tantalised and frustrated in equal measure.

Born in Sydney to an Estonian father and Latvian mother, Kink grew up in Ararat and got his early taste for Australian football kicking a plastic footy around the streets of Ararat with his mates. He became fanatical about the game (he barracked for Melbourne, having been attracted by Mike Williamson’s calling on television of unusual names such as Hassa Mann), and soon discovered he had extraordinary natural ability. He won several competition best and fairest awards and in his last season in the under-16s kicked 137 goals from 12 games, including one haul of 22.15 from centre half-forward.

Kink was invited down to the club for the 1973 pre-season training. He turned heads by kicking seven goals during one of the early intra-club trial games, and ended up passing through all three grades in the Collingwood ranks in that single year. The first of his senior matches was against Fitzroy, and Kink came off the bench at half-time to kick two goals on legendary Lion Kevin Murray.

But it was his first full senior game that year that really brought Kink to prominence. It came in the preliminary final, when he was preferred at full-forward to the most popular player in football, Peter McKenna. That would have been a tough assignment for any player, let alone a kid yet to start a VFL match. But Kink came through with flying colours, kicking 3.4 against the great Dick Clay and acquitting himself well enough to suggest that Collingwood had found one of the game’s most exciting prospects.

In many ways that is what he remained right up until his retirement. For despite 11 years, 154 games and 240 goals at Collingwood, Rene Kink never consistently performed at a level anywhere near that which his talent demanded. He became one of the game’s larger-than-life personalities, and one of its most exciting players. The trouble was that it was an excitement based more on promise, on what he could do, rather than on what he had done. 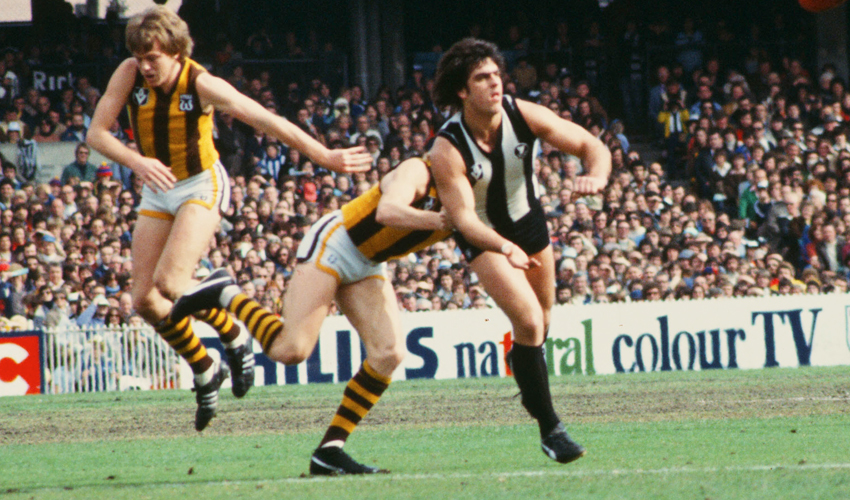 Rene Kink fires out a handball during the 1978 Qualifying Final between Collingwood and Hawthorn at the MCG.

He struggled to become a regular senior player until Tom Hafey arrived in 1977, and even after that he was one of the great enigmas of League football. At his best he was virtually unstoppable. He was immensely strong, with bulging biceps, massive thighs and a barrel chest that led to Lou Richards dubbing him “The Incredible Hulk” (after the TV character of the time who turned into a green, muscle-bound strongman whenever he became angry).

Despite his size he was also remarkably agile, fast and well skilled on both sides of his body. He also possessed the ability to do the exceptional; to kick the miracle goal from the boundary line, or spread-eagle a pack while gathering the ball. You only had to see him do something like that to understand the hype that buzzed around him.

Collingwood fans loved him when he was on song. Unfortunately that rarely happened regularly enough – or for long enough. Years later, Kink admitted he had major problems with motivation.

“People have said that I used to play a quarter or a quarter-and-a-half then turn off,” Kink said in 1991. “And I’ll be perfectly honest, I did. I just wasn’t interested. I don’t know if it’s right to say I got bored but … there were times when I played and I’ve looked at the scoreboard or looked at the situation and thought ‘This is giving me the shits’. I wasn’t dirty on the players or on the coach, I just thought ‘I’m not interested in this’.”

“I wasn’t getting anything out of it, there was no challenge to what I was doing. I just turned off, shut up shop for the day. The biggest criticism of Rene Kink has always been that I was an enigma, but that is me as a person. You just don’t know what to expect from me — and that’s how I played football. I’d be out there playing and the next minute I’d just think ‘Stuff this, I’m not enjoying myself or I’d lose interest or find myself thinking about something else.”

Kink’s inconsistency led to accusations of laziness, or an alleged tendency to believe his own publicity. But he wasn’t lazy, and always maintained he never bought into his public profile. He didn’t blame the ‘Hulk’ tag either.

“The Hulk image didn’t make things any more difficult. It was just a name which I was given. It didn’t make me think I had to go out and play like the Incredible Hulk. As a player you’ve just got to live with those kinds of tags. Sometimes it’s not easy.”

Kink was a regular presence in the seniors from 1977 to 1980. He played some brilliant games, and some brilliant quarters of football. But rarely did he string together a succession of good, solid matches in which he played consistently for the full four quarters. Despite his unpredictable form selectors were loathe to drop him, knowing what a match-winner he could be. Off the field he was amiable, easygoing and well liked, but the hot and cold nature of his on-field performances became increasingly frustrating.

His fortunes dived from 1981. He had a bad run with injuries, Hafey was sacked and he struggled to adapt to the coaches who followed him. Motivation became an even bigger issue. Eventually, nine weeks into the 1983 season, new coach John Cahill told him he was no longer needed at Collingwood. He then spent time at Essendon (where he established a record for having played in more unsuccessful grand final sides – six – than any other player in League history) and St Kilda.

In the end, Rene Kink’s career was one of flashes of brilliance but an overall sense of unfulfilled expectations. Maybe those expectations were unreasonable – though anyone who saw him at his best would disagree. A fan favourite from beginning to end, we all expected that one season Kink would just walk out on to the field and dominate the competition. But it never happened – and that is football’s loss.