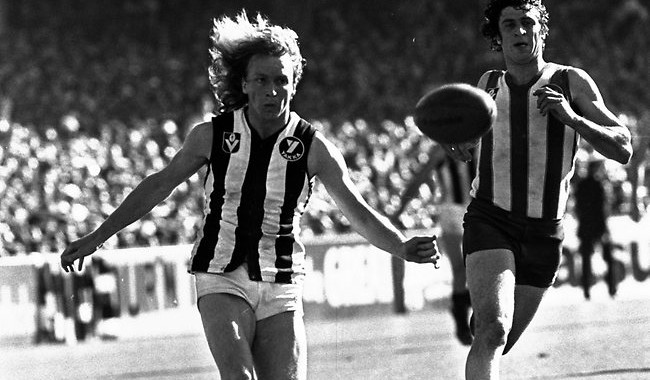 Think Ron Wearmouth, and the Collingwood rover’s trademark features immediately spring to mind for those Magpie fans who remember him fondly.

His blond, flowing locks; his energetic bursts from contests; his cheeky on-field manner that could sometimes get him into trouble; and a knockabout nature that endeared him to teammates and those in the terraces.

If a measure of a footballer’s popularity comes from such trademarks, Wearmouth was surely one of the club’s great characters, not to mention a player of serious note.

He could well have played his league football elsewhere. His father, Dick, played 100 games for Footscray in the 1940s and early 1950s, and his son could have followed him under the father-son rule. Fitzroy was also an option for a young Ronnie Wearmouth, as it controlled the zone around Terang, where he played some senior football in 1968.

But Dick was happy for his son to play with Collingwood, the club controlling the zone for Noorat, the tiny town where Ronnie played his first senior football, and where his family ran a dairy farm.

Part of the reason for choosing Collingwood was that the club’s vice-president and 1936 premiership player Jim Crowe had coached Wearmouth’s father at Footscray.

“Dad suggested I play at Victoria Park because of its stronger and more stable administration,” Ron would recall.

He joined Collingwood in 1969, and it is no surprise his hairstyle drew as much attention as his football ability in first year. As detailed in Michael Roberts’ A Century of the Best, one night at training Magpies coach Bob Rose “came out, pinned him to the ground and gave him ‘one of the best basin cuts you’ve ever seen'”.

Des Tuddenham recalled saying to the teenager from Noorat: “You can’t look like a girl, son, if you’re going to play a man’s game.” Wearmouth wouldn’t listen. He grew his locks back as soon as he could.

Wearmouth made his VFL debut in round 14, 1969, against Melbourne, wearing the No. 48 jumper, having 11 disposals. Doug Gott was the other debutant in the Magpies’ two-point victory over the Demons.

It would be his only senior match that season. He wasn’t surprised, saying later: “To be honest, I was a little out of my depth. I wasn’t conditioned and I was skinny and not ready for a game of senior football.”

Wearmouth was demoted to the supplementary list for a period in 1970, with concerns over his capacity for hard work and training. But, now wearing the No.35 jumper, he won his way back into the seniors for six games in the second half of the season, though he lost his place for the finals.

Inconsistency and a lack of discipline at times cost him in his early years at Collingwood. A few suspensions earned him the reputation of being a “hothead”, but he was at least elevated to the No. 5 jumper for the 1972 season when Neil Mann took over as coach. He rejected the advances of other clubs, with his father urging him to stay. Wearmouth decided to knuckle down as best as he could.

The arrival of Murray Weideman as coach brought another transformation for Wearmouth. In some ways, he was a kindred spirit to the coach, and he was given more time on the ball as rover, and less time in the forward pocket. While the two seasons Weideman coached Collingwood proved to be a tumultuous time, Wearmouth established himself as one of the club’s most consistent and determined players.

He played 11 games in Weideman’s first year in 1975, but flourished the following year as one of the few highlights in what was a gloomy season. He finished third in the Copeland Trophy in that wooden spoon year.

Wearmouth took his game to a new level when Tom Hafey joined the club as coach in 1977. He said: “Hafey put consistency into my game and under him I played something like 70 to 80 games in a row.”

He became fitter and seemingly more explosive under the strict training regimen. He may not have had the aesthetics of some of his more gifted teammates, but he more than made up for it with grit and determination.

He missed only one game in 1977, with one of his finest performances coming with 31 disposals and a goal in the Second Semi-Final win over Hawthorn. He was a solid performer in the two Grand Finals that season, but the fairytale that Collingwood fans had been hoping for sadly didn’t eventuate. After a drawn Grand Final, the Magpies were no match for North Melbourne in the replay.

Sadly, for Wearmouth, and his team, there would be more heartache to follow. The 1978 season ended in the Preliminary Final; and two more Grand Final losses followed in 1979 (by five points) and 1980 (81 points).

Injuries cost him the chance to make a play for another Grand Final slot in 1981. He played only eight games in his final AFL season, with his final game coming against Richmond in round 20.

It was his 186th and last VFL match, with his career closing only a month after his 30th birthday, and after 13 seasons in Black and White.

His greatest regret, as expected, was never winning a premiership: “We came close that many times but could never manage to win one.”

He played for and coached a number of clubs in country Victoria and Queensland, losing further grand finals for Port Fairy and Western Districts. “For a while I thought it was me who was jinxed. But I finally broke the drought when I played for Caloundra in Queensland,” he said in 1990.

No one would have begrudged him finally tasting premiership success, even if it was at a local level. For everyone seemed to love Ronnie Wearmouth.

He has remained in touch with some of his Magpies teammates, who adored his personality and love of a good time. Just as strong has been his bond with the Collingwood army, who still fondly recall him to this day.