Rupert Betheras dances around an Essendon opponent on ANZAC Day 2001.

As Collingwood charted a pathway from easy beat to unlikely premiership contender in 2002, a new chant spread its way through the Black and White army on match days.

The catchcry was ‘Ruuupppeee … Ruuupppeee” and it grew voice whenever the club’s industrious midfielder-forward Rupert Betheras went anywhere near the ball.

It was unconventional, and out of the ordinary, just as Betheras was.

Many Collingwood footballers who have had longer and more productive careers have not had the same sort of engagement with the fans as Betheras had in much of his 85 games across five AFL seasons. But somehow he seemed to touch not only the supporters who admired the way he embraced the contest, but also his teammates who respected his honesty and commitment to the cause.

Even he couldn’t quite explain it: “I suppose if it can get everyone fired up, that’s good.” 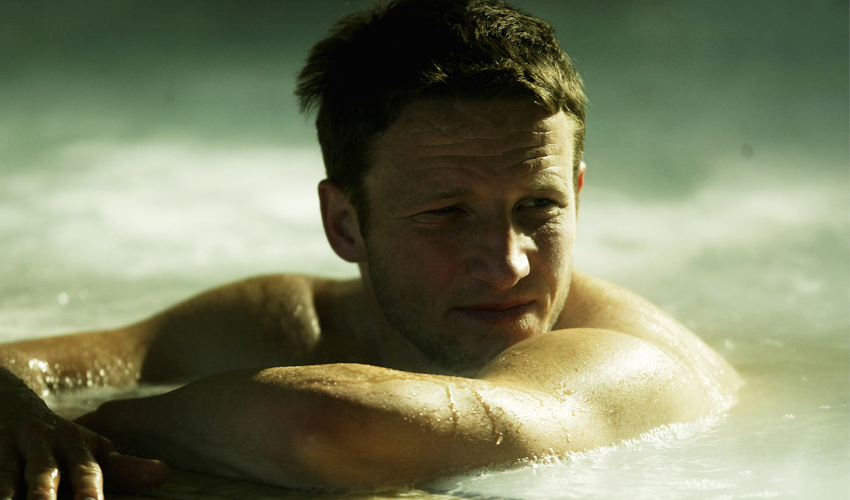 A reflective Betheras at the St Kilda Sea Baths in 2002. Photo: AFL Media.

Nathan Buckley acknowledged in Betheras’ first AFL season, 1999, that the new player wearing the No.49 jumper “was always going to get him a bit of attention (because of his unusual name), if he got a kick.”

Fortunately, for Collingwood, he could get a kick, even if his pathway into the AFL came from an alternative route. He had shown good potential as a junior at East Malvern, though he was a late developer, highlighted by the fact that X-rays when he was 15 showed that he had the bones of an 11-year-old. He had two seasons with De La Salle in the VAFA before heading off with a girlfriend on a surfing sabbatical to Western Australia.

Betheras drove across the Nullarbor Plain – with no spare tyre, mind you – with football the furthest thing from his mind. But a chance meeting with a mate on the beach at Margaret River changed the direction of his life.

That mate invited him down to train at East Perth, where former Magpie Kevin Worthington was coaching, and he impressed from the outset, and wound up playing every game of the 1996 WAFL season.

Such was his form that he was rookie-listed by Fremantle, though he never won a senior call-up.

A move back to Melbourne followed and he sent a video highlights package to a host of AFL clubs. One of them was Collingwood, and the Magpies reserved a spot for him on its supplementary list for 1998. By the end of that season he was almost part of the furniture, acting as the reserves captain and winning the best-and-fairest award.

He shouted ‘Go Pies’ into the microphone when accepting the Joseph Wren Memorial Trophy on Copeland night. That further endeared him to the faithful, and saw him rewarded as pick 76 in the national draft.

Betheras debuted for Collingwood against West Coast in round three, 1999, in the penultimate match at Victoria Park. He would play 16 games for the year as one of the few illuminating characters in a season of darkness.

His first six games resulted in losses, including one to Adelaide that he almost secured off his own boot, only to be penalised for a push in the back in the dying moments.

A week after that near-miss, he played “the game of his life”, according to one newspaper, against St Kilda, having 27 disposals, kicking the sealer goal 21 minutes into the final term and having Nathan Burke assigned to him. “When you haven’t played in a winning team before, you don’t look at those things (the goal) as sealers …. I’ve always had to fight pretty hard for my position,” Betheras said after the breakthrough win. 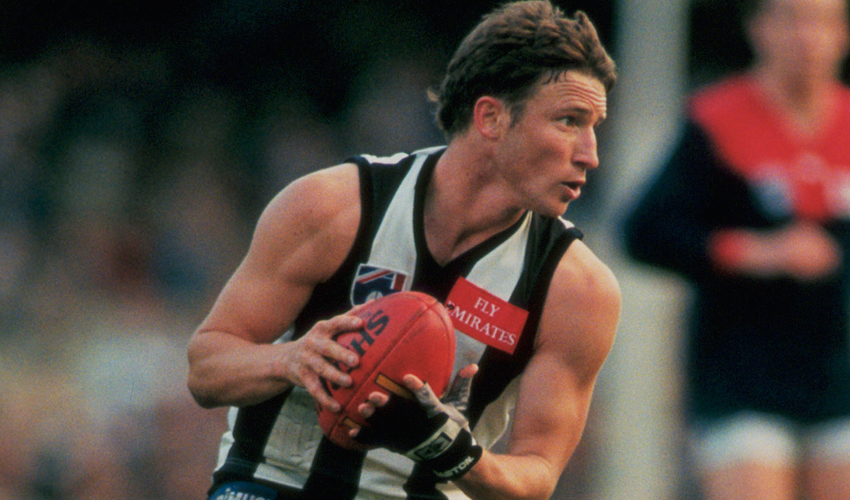 He was happy to take on difficult roles, playing on seasoned midfielders Mark Bickley, Todd Viney and Daryn Cresswell in his first season. The more arduous the role; the more he seemed to thrive on it.

“I always had the belief that once I got a go, I’d play all right,” he said.

Betheras finished in the top 10 of the Copeland Trophy, winning the Harry Collier Trophy, as best first-year player, as well as highly-regarded ‘Wrecker Award‘ in that debut season.

He barely missed a beat the following year, under new coach Michael Malthouse, playing all 22 matches, finishing sixth in the best-and-fairest award and winning the Darren Millane Perpetual Memorial Trophy as best clubman.

A blue-collar worker who was more of a pure footballer in a time where many clubs were chasing athletes, Betheras was described by Buckley as “very much team-orientated, (always) about doing the right thing, and working hard to earn your stripes.”

A guernsey number change to 10 came in 2001, but he managed only 14 games that season, finding himself out of the senior side late in the year.

But his most influential season was to follow, as he played all but one game of the 2002 season, contributing to Collingwood’s run through to a Grand Final appearance against Brisbane Lions.

His impact gave life to the chant, notably in the round eight clash with a seemingly invincible Brisbane at Docklands, a game in which he kicked three goals and had 22 disposals.

Asked after that breakthrough win over the Lions why he had rapidly become a Collingwood cult figure, Betheras shrugged his shoulders and said: “I don’t know”. 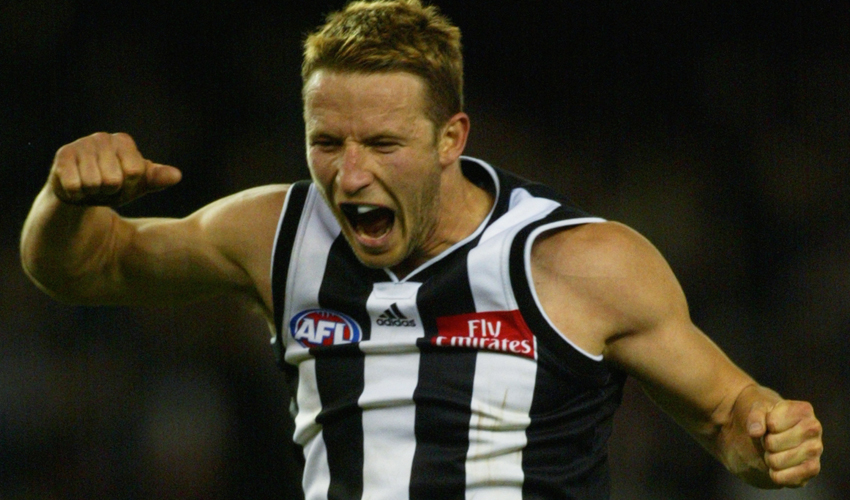 Betheras celebrates as the final siren sounds on Collingwood’s three-point win over Brisbane in round eight, 2002. Photo: AFL Media.

But the real explanation was that Pies fans loved the way he attacked the ball and the way he had a capacity to provide a spark when it was required. They were also intrigued by his story off the field, and how this one-time street graffiti artist had taken to painting. For a time he had even taken up the disused press box in the Bob Rose Stand as his art studio.

Betheras played a significant role in Collingwood’s spirited run through September, kicking two goals in both the Qualifying Final win over Port Adelaide and the Preliminary Final win over Adelaide.

He had 14 disposals – including nine contested ones – in Collingwood’s nine-point loss to Brisbane in the 2002 Grand Final, throwing himself into every contest as if his life depended on it. In the rooms after the game, he spoke of how the pain of narrow defeat could hopefully lead to something better.

“We thought we could win the game, showed we could, but we didn’t,” he said that night. “It’s an opportunity lost and it doesn’t come around every year.”

Collingwood would get its chance the following year, but would fall short again. Betheras wasn’t there, having lost his spot in the senior team late in the season.

Ever the team man, he did play in a premiership that year, with Williamstown – Collingwood’s aligned side at that time – in the VFL sharing the moment with a young Nick Maxwell and Dane Swan.

Betheras was only 27 when he was delisted at the end of the 2003 season. He did pre-season training with Richmond one summer and with North Melbourne the next, but never got another shot at it.

Sadly, his AFL playing career was over, but his influence on the game wasn’t. Betheras would go on to play a key role in unearthing Liam Jurrah and helping to put him on the pathway to becoming the first indigenous player from a remote community to play AFL football, albeit with Melbourne. He would continue to work with indigenous communities, assisting many young sportsmen and women and artists along the way.

Betheras was a good footballer, but in many ways, he was never solely defined by the game that he played. Maybe that’s what endeared him to Collingwood fans so much when he was wearing the Black and White jumper. 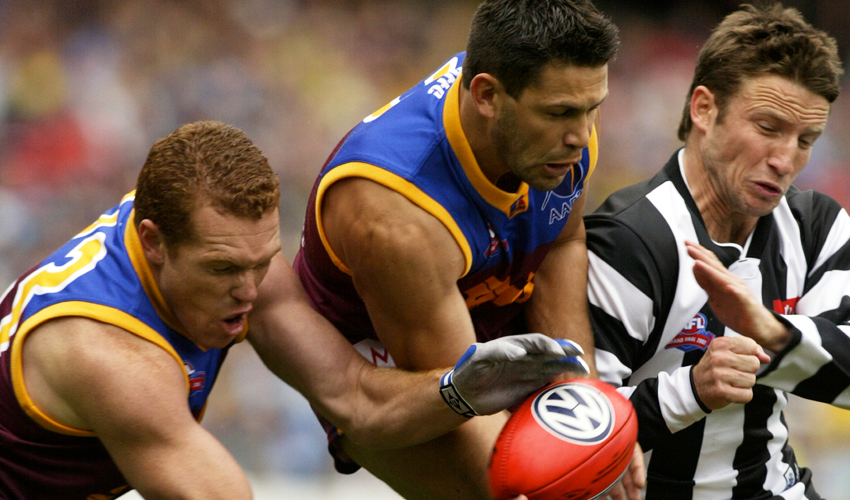