Magro, who came to Collingwood from Western Australia in 1977, was ahead of his time in his approach to doing the hard things on the football field. His ferocious tackling, in particular, became famous. Few players hit their opponents with such force, and an air of expectancy would rise whenever it looked like he had someone in his sights. His tackling was more like that seen on rugby fields than on football grounds.

But it wasn’t just his tackling. His whole approach to the game was based on a mad-dog determination that saw him win a thoroughly deserved reputation as one of the real “hard men” of the Collingwood teams of the Hafey era.

Everyone who saw it remembers the shuddering hip-and-shoulder with which he ironed out Carlton’s Alex Jesaulenko in 1979 – an act that instantly made Magro a hero of the Magpie fans for life. Former skipper Ray Shaw says that was typical of what Magro brought to the table. “How could you play against someone like that? You just wouldn’t know what he might do to you,” he said. Former teammate Peter Daicos wrote in his book that: “Sometimes you weren’t sure if he had all his marbles he was so hard.”

Opposition forwards must have wondered the same thing. There wasa sense of fanaticism in the way Magro approached both the game and the ball. He was not tall, only standing about 177cm (5ft 9.5in), but he had a robust, muscular frame, and legs that were especially strong. There was nothing fancy about his game, but he would let nothing, or no one, stand in his way when it came to winning possession. Ray Shaw says he has not met a more fierce competitor than the rugged West Australian. If an opponent had the ball, Magro would launch himself at him and bury him in the turf. If it was a 50-50 ball, then there were few players Collingwood would rather have had battling for it.

Magro is the first to admit he was not quick (those who saw Kevin Bartlett elude and outpace him in the 1980 Grand Final would not argue) so he had to rely on other aspects of his game to survive in the VFL. It was here that his judgement, reading of the game, aggression and willingness to chase, tackle and harass became so vital. In the end, the fact that he was able to play nearly 100 VFL games, most of them in the back pocket on small, speedy types, shows how well he was able to counter his lack of natural pace.

In other areas of the game Magro was good without being outstanding. But talk about Magro and it is always things like his competitiveness, his commitment and his aggression that come to mind. He may not have been dashing or stylish, but he was good value. Collingwood got 110 per cent from Magro every time he went on to the field. And he was good enough to finish third in the club’s best and fairest in both his second and third seasons. 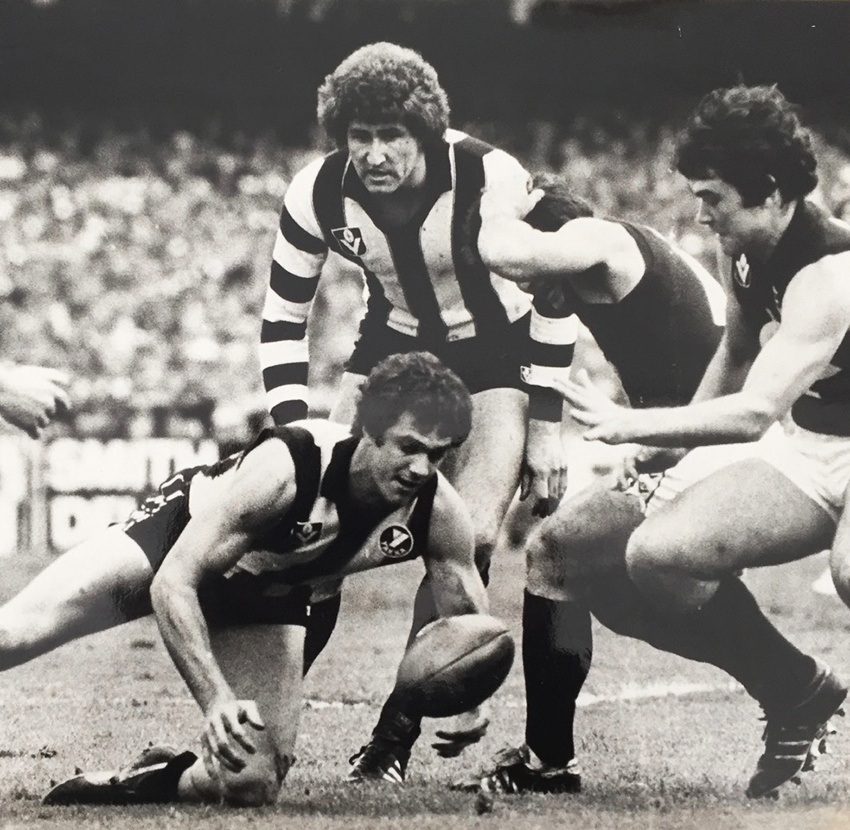 Magro had always played his football the same way, even in his earliest days with junior sides in South Fremantle. He was an outstanding schoolboy footballer who twice represented his State in under-15 carnivals (the second year as captain), on each occasion winning selection in the all-Australian team.

The year after the second of those carnivals he made it to senior ranks at South Fremantle, making his debut in the firsts at the age of 15. In all he played 115 games with South, mainly in the centre, was an interstate player several times and in 1975 won the Simpson Medal in WA’s game against Victoria.

That performance, and his others in WA domestic football, soon brought Magro under notice in Victoria. He was approached by both Richmond and Geelong before settling on Collingwood. The Cats actually offered him more money, but Magro had always been a Magpie barracker, following the club’s fortunes via TV and the newspapers.

So Magro, aged only 22, arrived at Collingwood in 1977 to join a team that had finished last the previous year. He, fellow Sandgroper Kevin Worthington, Ricky Barham and coach Tom Hafey were the only recruits of note, but the difference was remarkable. Collingwood went from being wooden spooners in 1976 to ladder-leaders in 1977, and then three more grand finals in the four years that followed.

Magro, like so many of his former teammates, attributed that success to the amazing team spirit that Hafey generated during his first few years at the club. Magro played a valuable role in that too. He was renowned for tackling his social activities with the same gusto as his footy, and he quickly became an important influence around the club and to the spirit within the playing group.

Ultimately though, spirit wasn’t enough to get Collingwood over the line in the grand finals. After a 1982 season that was disastrous for the club both on and off the field, and not much better for Magro, he began to think about returning home.

Magro returned home and played with East Perth for two years, and later coached South Fremantle for four seasons. In between he took up the position as captain-coach of a WA country team, leading them to a Premiership with good mate Worthington alongside.

Magro’s Collingwood career wasn’t massive – only six seasons and fewer than a hundred games. But every Magpie fan of that era remembers the hit on Jezza, and the fierce desperation he showed every time he pulled on the Collingwood jumper. They loved him for both.