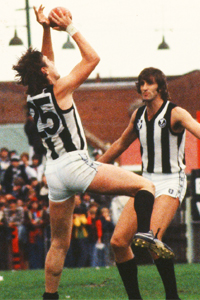 Collingwood’s first win against the Swans in Sydney was a memorable match played out in controversial circumstances.

It was Round 14, 1984, and our once parochial, suburban game was slowly morphing its way into the national consciousness.

The move of South Melbourne to Sydney two years earlier had started the ball rolling, and teams such as Collingwood had to come to grips with an annual trip to the Harbour City to compete, which was no easy feat.

Given Collingwood’s recent run of success in Sydney, you might be forgiven for thinking the Magpies had always had a strong record when playing up north.

But that hasn’t always been the case.

There were two pioneering matches played against different opposition in 1903 and 1952 which was all a part of the pioneering push to take the game well beyond its traditional boundaries.

One of them ended in a loss – the 1903 clash against Fitzroy. That came in a premiership season – a back-to-back one, at that – but there would only be disappointment in the result as the Maroons prevailed at the SCG on the day.

The other venture north was rewarded with a win over Richmond in 1952, when the VFL took the game to a number of different venues for one round, including the SCG, Brisbane, Euroa, North Hobart, Yallourn and Albury.

Years before that, in 1935, South Melbourne and Collingwood undertook a late season tour to Brisbane and Sydney for three exhibitions games. The Magpies won unofficial games in Brisbane and Newcastle, but the Swans prevailed in Sydney.

Collingwood had played South Melbourne in Sydney in 1981, and lost, and did the same against the Sydney Swans in 1982 and ’83.

That match was played on July 1, 1984. Duran Duran’s The Reflex was No.1 on the Australian charts; Bruce Springsteen’s Born In The USA had just been released; Ghostbusters was the movie of choice; and Paul Hogan – two years away from starring in Crocodile Dundee – had just started to push Australia on a global stage with his “Put Another Shrimp on the Barbie” TV commercial.

At the time, Collingwood was clinging to the top five, having lost to the powerful Essendon at Victoria Park the week before in a match remembered as much for Geoff Raines falling across Paul Salmon’s knee – ending Salmon’s season – as much as the 34 point loss for the Magpies.

Sydney, too, was finding life pretty tough, sitting ninth on the ladder.

But the lead-in to the Round 14 clash with Collingwood would prove to be one of the most controversial in the club’s history.

Incredibly, on the eve of the game, the Swans’ coach Ricky Quade had been rushed to hospital after collapsing. Earlier captain Barry Round appeared to have been sacked.

It was an unprecedented moment when a team lost its two leaders after a personal dispute between the pair left Quade in a precarious state (he would never return to the coaches’ box) and Round out of action (but he would at least return).

And the Swans had to rely on chairman of selectors Tony Franklin to take charge of the team against Collingwood that day as he joined that exclusive group of men to have coached one VFL-AFL game of football.

There would be Magpie connections – past and future – in the Swans line-up that day.

One of Collingwood’s favourite sons, Bill Picken, wearing the No.14 jumper, played his 10th game for Sydney, having earlier played 217 for the Magpies.

His departure from Victoria Park at the end of the 1983 season had frustrated many Magpie fans. The man who was one of the club’s great finals players would have two seasons with the Swans before returning home for five games in 1986, albeit in the No.2 instead of his trademark No.25.

Paul Hawke, one of the Swans’ best players that day, would one day become a Magpie, as would Greg Smith – dubbed ‘the Bionic Man’ for his capacity to play hurt.

And young Swan Terry Thripp, playing his fifth game, was the son of former Magpie Bill Thripp, who played 46 games from 1959-62, including the losing 1960 Grand Final.

Collingwood’s coach of the time, John Cahill, had access to a reasonable squad of players. The Magpie 20 on that day against the Swans had an average age of almost 25 years, and was an experienced group along with a handful of youngsters.

Three of the Magpies that day had played less than 10 career games – Allan Eade in his second game (incredibly wearing No.52), Tony Kelly (ninth game) and a kid called Jamie Turner, in his fifth game.

Turner, the son of Magpie premiership player Ken, would be a flag winner in his own right six years later.

Three Shaws were in the Magpie team that day, though only one from the famous Shaw family at Collingwood.

There was 23-year-old Tony; 25-year-old Derek; and 25-year-old Gary Shaw, the high-priced recruit from Western Australia.

Daicos was playing his 100th game and was already a star, though he was struggling for form at this stage. He was finding it tough to break a tag which saw Cahill instruct him to spend some time with Collingwood’s legendary Bob Rose.

Rose met with Daicos several times before his milestone match against the Swans, with the message being that he had to work harder.

Rose said: “Peter is down in confidence and needs a bit of advice. John (Cahill) believes that because I played in a similar position I can help.

“Tagging is a part of his game and will be for the rest of this season. One of the things I have impressed on him is to train harder and run a lot more during a game.”

It’s not clear, 30 years on, whether Rose’s advice made a difference that Sunday afternoon at the SCG, but Daicos did have 22 touches and kick two goals in a solid performance.

Five Collingwood players from the game had been recruited from rival VFL clubs – Cloke, Raines, Shane Morwood (against his old side), Bruce Abernethy and a 25-year-old who had previously played for Essendon and Footscray.

His name was Jim McAllester.

Prior to joining Collingwood that season, he had only kicked four goals in VFL football. That day alone he would kick seven goals in a stunning performance.

Swans stand-in coach Tony Franklin had tried to use what the press had called “the Ricky Quade and Barry Round crises” to rally his players.

Franklin said: “Both Ricky and Barry, over the past three years, have been what the club has really been built on. The situation…was a thing to use (to motivate the players) for sure.”

But it didn’t work. Despite a solid start, where the Swans held the lead at the first charge, the Magpies would prove too good for the rest of the afternoon.

The Sun recorded: “Collingwood was too talented and experienced” and put the game beyond doubt with an outstanding second half of football before only 14,917 fans.

In the first term the Swans, led by the likes of Smith, David Rhys-Jones, Mark Browning and Doug Ackerly, held a narrow lead.

It was said that Picken “obviously fired up for the clash against his old club, was controlling the centre half-back position.” Sadly, he pulled a hamstring flying for one of his trademark grabs during the second term and limped from the field.

That left the Swans seriously short of manpower and allowed Collingwood to take control of the contest.

Almost as soon as Picken went off, McAllester kicked a goal to put the Magpies in front for the first time and they jealously guarded the lead for the remainder of the match.

By the 19-minute-mark of the second term, the Magpies had shot out to a three-goal lead after another goal to McAllester and one from Barham.

The flamboyant Warwick Capper helped to get the Swans closer with a goal late in the term that brought scores back to a point. Yet a goal to Gary Shaw right on the half-time siren from a tight angle gave the visitors some breathing space.

Whatever Cahill said to his team in the rooms at half-time must have struck a chord. Collingwood came out inspired and kicked eight goals to four in the third term to effectively lock in the result.

Michael Davis, of the Sun, described it as “an onslaught … the Magpies’ third quarter play was full of merit. They ran in groups and teamed effectively with clever use of hand and foot passes.

“As well, David Cloke began to assert himself in the ruck where Swans’ Steve Taubert had been doing well.”

And McAllester was having a day out.

McAllester kicked seven goals; Gary Shaw and Williams three each; while Barham and Daicos kicked two goals apiece. In the Swans’ camp, Capper could only manage one goal, while Rhys-Jones, Hawke and Wayne Carroll kicked two.

Cahill was delighted with Collingwood’s first win against the Swans in Sydney, but issued a word of caution: “There is still a lot of improvement required to be a force in the five.”

He would be right.

While the Magpies would end up finishing the home-and-away season in fourth spot (Sydney was 10th), and would beat Fitzroy and Carlton in the finals, the reality check came in the form of Essendon in the preliminary final.

On that day, at Waverley Park, the Bombers proved too good for the Magpies, ending their season with a 133-point loss, one of the worst defeats in the club’s history.