Four of the best

But would it surprise you to know that, statistically, the Magpies’ most productive quarter came against Carlton?

That came with a blistering 12.5 (77) in the third quarter against the Blues in Round 4, 1969 at Princes Park, bringing about the first defeat of the reigning premiers.

It was also a bruising game that resulted in four reports (including two Magpies), coach Bob Rose rated it as one of the most complete victories in his time at the club, and it also featured a fine performance from a shooting Magpie star.

Here is a quarter-by-quarter breakdown of Collingwood’s highest scoring terms from its first 1500 wins, including that famous victory over Carlton.

Was it any wonder that Collingwood took the field with a point to prove in the round one game against Footscray in 1971?

The previous game had been the 1970 Grand Final, a game that could have – and should have – been one of the crowing glories of Bob Rose‘s tenure as coach of a star-studded team. Instead, after leading the premiership decider by 44 points at half-time, the Magpies were overrun by the Blues. What had looked as an unlosable situation became another embarrassing chapter in the club’s quest for its 13th VFL premiership.

So, as The Age described it, “the Magpies burst all their pent up 1970 Grand Final frustrations into a 30-minute mauling that left Footscray a beaten side at quarter-time.”

Captain Des Tuddenham, playing his 148th game, set the scene by kicking the opening goal of the game, and he slammed home five of his team’s 11 goals of the first quarter. By game’s end, Tuddy had nine goals.

It was described as “some of the most devastating of football seen at Victoria Park in a long time” with Tuddenham clearly the best man afield.

Mike Smith, from The Age, said of 28-year-old Tuddenham that “his ruthless, marauding play around the packs … set the example which was followed by every other Collingwood player.”

Wayne Richardson and Len Thompson each kicked four goals. So, too, did Peter McKenna, but it was said that his opponent Dave Darcy held him relatively in check.

The half-time margin of 69 points was extended to 83 by the end of the game, but all anyone wanted to talk about was the devastating first-term that remains the Magpies’ best start to a game in history.

Coach Bob Rose said after the match: “I was happy with the game, apart from a natural lapse after we built up a big lead … I thought we had Footscray well covered.”

Collingwood went to the quarter-time break of its round three clash with Essendon five points in front after a hard-fought first term.

Tom Hafey asked for something extra from his team. It was his third game in charge of the club, and he knew his team could do better after a solid but unspectacular opening half hour.

He could hardly have believed what came next.

The Age described the second quarter as a moment in which the Magpies – who had finished last the previous year – proved “to all its fanatic followers that season ’76 is a forgotten nightmare.”

Twenty-four-year-old Graeme Anderson, playing his 32nd game, was the dominant player that day. He excelled in that “dream” second term, kicking 8.2 in his best performance with the club.

The coach expressed his frustration after the game, saying: “Yes, we won today, but I warned the boys at half-time not to relax, but it just didn’t sink in.”

He warned a four-quarter effort would be required for the next game, against his old side, Richmond, on ANZAC Day, and this time around, he would get what he was after. 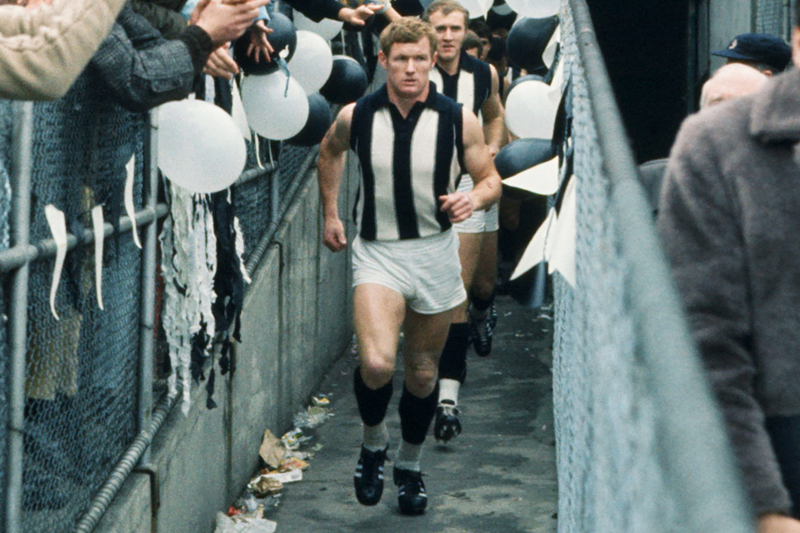 Des Tuddenham played a key role in Collingwood’s twelve-goal third quarter against Carlton in round four, 1969.

Reigning premiers Carlton held onto a five-point lead at half-time of the round four clash with Collingwood in 1969.

The Blues hadn’t lost since round 16, 1968, and as evenly matched as the two teams had been during the first two terms, most people expected the home side to win the points on the resumption of play.

That was far from the case.

The match was turned on its head in the most unlikely of scenarios – a blistering third term that would be the most prolific in the club’s long and proud history.

As The Age’s Ron Carter described it, “the third quarter … was the best 25 minutes play a Collingwood team has put together for many a day. To score 12.5 to Carlton’s two behinds in that one term revived memories of Collingwood’s great teams of the past.”

The turnaround seemingly came from nowhere, with Carter saying: “the first half was just like any other game of football … tough, hard and close scoring.”

“As the teams came out for the start of the second half, there was nothing to indicate Carlton was about to have its big reputation well and truly rubbed into the Princes Park mud.

“The speed and method by which Collingwood took control of the game so completely came as a shock to everyone.”

Coach Bob Rose compared the performance to when Collingwood overcame Geelong in the 1953 Grand Final, after earlier knocking the Cats off at Kardinia Park.

“We had Carlton tabbed after a big meeting last Thursday night,” Rose said after the game. “All our players knew exactly what was wanted and what we had to do.”

He acknowledged it was clearly the best team effort of his coaching career to that date.

Of Collingwood’s 12 goals kicked in the third term, one came in the first minute, four within nine minutes, eight in the first 17 minutes, 10 goals came in 20 minutes and 12 goals were on the board by three-quarter-time.

The difference at the last change was 70 points – incredibly, a 75-point turnaround in a quarter. And while the Blues outscored the Magpies marginally in the last term, the final margin was 64 points.

In the rooms after the game, Magpies President Tom Sherrin told the players: “I’ve never been prouder of a Collingwood side … I’ve never seen the Magpies play better.”

Eighteen-year-old John Greening, in his 19th game, showed a sign of his enormous potential, kicking 7.3 in the same jumper that his coach had made famous.

Greening kicked three goals in that third term, as did Des Tuddenham and Wayne Richardson. Richardson’s treble of goals came within a three-minute period.

There were more than a few fights to go with the goals, and four players, including Magpies Len Thompson and Ted Potter, had their numbers taken by the umpire in charge.

But the third quarter was the only thing that mattered.

Seven goals to Peter Daicos; seven goals to Gavin Brown in one of his first significant moves from the wing to full-forward; and 11 goals in one remarkable final term.

The Magpies held sway at three-quarter-time against North Melbourne in round nine, 1990, leading at the last change by 29 points. But the game was far from done, with Magpie fans still on edge at the break.

Daicos explained later: “When you go out there at three-quarter time two or three goals up, you never know what’s going to happen.”

The fans need not have worried, thanks to Daicos’ magic, and an extraordinary 11-goal final term that pushed the final margin out to 80 points.

Daicos almost didn’t play in the game. He had been crook the previous day, spending it in bed with the flu. But he dragged himself out of his sick bed and helped the Magpies to their best last quarter-ever.

Two minutes into the final term, the star forward set the scene for what was to come. He swooped on the ball near the boundary line and slotted it through the middle with a banana from the pocket.

The Sun’s Michael Davis said: “It should have been worth two goals.”

Incredibly, the feat won what appeared to be a standing ovation, and was the highlight of a day full of them.

Coach Leigh Matthews could barely believe it: “I wasn’t quite sure what I saw. I’m still not quite sure. It was unbelievable, wasn’t it?”

But just as significant in the long-term was the fact that Brown was played deep in attack, instead of on the wing, and he was unstoppable, kicking 7.0. It was a template for the rest of the season.

Following on from 10 goals in the final term the previous week against Fitzroy, Matthews’ team stormed home with 11 in the clash with the Kangaroos, showing just how exciting this team was when at its best.