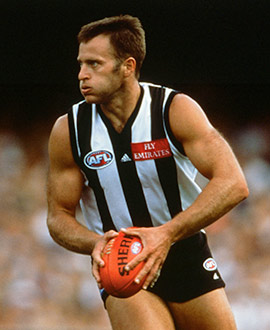 1. Saverio Rocca, Round 13, 1993
One of Collingwood’s best forwards of the 1990s, Sav Rocca‘s four goals in a losing game against West Coast prompted his nomination after his 22nd game. But his career went into overdrive the week after.  In that game – his 23rd overall – Rocca kicked a bag of 10 goals against Richmond and a fortnight after that he booted another 10 against Footscray on his way to 73 goals for the year. He never got a look in for the overall award though, with the likes of Nathan Buckley, James Hird, Shane Crawford, Glenn Archer, Scott West, Matthew Richardson, Dustin Fletcher and Mark Mercuri making it one of the strongest years on record.

2. Kent Butcher, Round 8, 1994
Twenty disposals in Collingwood’s big win over St Kilda in Kent Butcher‘s 10th game were enough to win the weekly gong. He arguably had a better game the following week, with 26 touches against North Melbourne, but the running backman would manage only another 12 games in black and white before transferring to Sydney, where he did not play a game.

3. Jon Hassall, Round 22, 1994
One of five Magpies to be forever frozen on 50 games with the club, Hassall played 23 games in his debut season with the club in 1994, leaving his Rising Star nomination until round 22. He had 18 touches in the club’s heavy loss to North Melbourne. It was his 20th AFL match and the run-with defender would win the club’s best first year player that season. He would end up playing a further 44 games with Hawthorn from 1997-99.

4. Andrew Schauble, Round 7, 1996
A consistent player in his early years at Collingwood, Andrew Schauble came under notice in his 10th game when nominated for a 14-disposal, one-goal performance in a loss to St Kilda in 1995. It would be the best statistical year of his five seasons – and 79 games – with the Magpies. After a trade to Sydney, he won the Swans’ best-and-fairest award in 2000.

5. Mal Michael, Round 18, 1997
Mal Michael was a three-time premiership player, but sadly not with Collingwood. He won his gong in only his ninth game, after a great defensive game against St Kilda in late 1997, in his debut year. He would manage only 61 games in four seasons in Black and White before his successful move to Brisbane, where he won his flags. Two of them came against Collingwood, which hurt those who fondly remembered him in the No.48 jumper.

6. Nick Davis, Round 5, 1999
Essendon staved off a fast-finishing Collingwood in the 1999 ANZAC Day clash, and while Mark Mercuri would eventually be adjudged the ANZAC Day Medal winner, Nick Davis got his own tick for a strong performance in only his fifth AFL game. Nineteen-year-old Davis had 18 touches and five inside 50s in the eight-point loss and such was his efforts that he was nominated a few days later as the Rising Star of the week. He, too, would be off to a new club after four seasons, heading to Sydney, where he would play in the 2005 flag side.

7. Paul Licuria, Round 18, 1999
After 10 games across two seasons with Sydney, Paul Licuria craved a return to Melbourne and to the club he barracked for as a kid. He got that in 1999, and after only his ninth game with his new club – and 19th overall – he received a Rising Star nomination with a 28-touch effort against West Coast – wearing the unfamiliar No.32 before switching to No.18 the following year.

8. Damien Adkins, Round 3, 2000
Magpie fans wondered if they were witnessing the birth of a new star in Damien Adkins‘ first few games in Mick Malthouse’s first season as coach. He kicked two goals on debut against Hawthorn and a further two and had 19 touches in round three against Carlton, for which the 19-year-old copped his Rising Star nomination. Injuries and inconsistent form cruelled his career and he was gone within three seasons, before being traded to West Coast for Andrew Williams. He played in the Eagles’ 2004 Elimination Final side, but missed selection in the 2005 Grand Final.

9. Josh Fraser, Round 6, 2000
Collingwood’s only No.1 draft selection, 18-year-old Josh Fraser made an instant impact, winning the Rising Star nomination for his Round 6 effort against North Melbourne. He had 17 disposals in the game, kicked a goal and played forward and shared the ruck duties with Steven McKee.

10. Ryan Lonie, Round 4, 2001
Ryan Lonie had a fine debut year for Collingwood, winning a Rising Star nomination in only his fourth game, against Richmond in 2001. He not only ended up playing 21 games in that debut season, his hard-running and long kicking even saw him poll 11 votes in the final tally won by St Kilda’s Justin Koschitzke.

11. Jason Cloke, Round 6, 2002
Collingwood’s massive 83-point win over St Kilda was good enough for Magpie fans, but it got even better on the Monday afternoon when the AFL announced Jason Cloke as the Rising Star nomination for the week after only his fifth game. The defender had 17 touches and five tackles, in a debut season which finished with a heartbreaking suspension in the preliminary final.

12. Mark McGough, Round 10, 2002
You would probably assume that Mark McGough‘s Rising Star nomination would have come from his Anzac Day dominance in only his second game. It didn’t. The 17-year-old school boy had to wait until his seventh game to get the AFL honour, after he had 16 touches against Sydney in round 10. McGough would be a comet flashing before Collingwood supporters’ eyes in only three seasons before moving briefly to St Kilda.

13. Alan Didak, Round 16, 2002
Alan Didak gave a few hints of his brilliance in his five games in 2001, but that just kept escalating in the years to come. In his second season, and in his 16th game, the skilful forward had 13 touches and kicked two goals as a sure sign this kid was going to be a star. And that performance won him a Rising Star nomination.

14. Richard Cole, Round 17, 2003
In his second season at the club, and in a one-sided game against the old enemy Carlton, Richard Cole put his name forward for a Rising Star mention when he had 17 touches and kicked a goal. Frustratingly, his four seasons at Collingwood, and his two at Essendon, did not yield what anyone would have wanted, despite the fact that he polled well in the 2004 Copeland.

15. Matthew Lokan, Round 22, 2003
An unlikely success story for Collingwood in his debut season of 2003, Matty Lokan played every game (including the Grand Final), playing across half-back, won the club’s best first year player and received the final Rising Star nomination that year. Struggled to make an impact after that, but made the most of his AFL career.

16. Guy Richards, Round 9, 2004
The ruckman enjoyed a solid 2004 season, playing 12 games, winning the club’s best first year player, and receiving a Rising Star nomination after having 15 touches, kicking a goal and having 13 hit outs against Adelaide.

17. Travis Cloke, Round 10, 2005
Six games into his AFL career, Travis Cloke won the Rising Star nod for his 15-disposal, six-mark and one-goal performance in the club’s win over Hawthorn.

18. Dale Thomas, Round 2, 2006
His first game produced a screamer and two goals; his second yielded 20 disposals and no goals but won him the Rising Star weekly prize.

20. Scott Pendlebury, Round 4, 2007
Surprisingly, Pendles didn’t get the Rising Star nomination out of nine games in his first year (2006), but he wasted little time in getting the recognition in his second. In round four – his 13th game – the star midfielder had 20 touches and kicked two goals against the Power. Pendlebury polled 37 votes, only seven votes behind the eventual winner Joel Selwood.

21. Marty Clarke, Round 13, 2007
A week after his stunning debut against Sydney, Marty Clarke won the Rising Star weekly tick in only his second game, with a three-goal 19-disposal effort against Hawthorn that had plenty of people talking about the Irishman.

22. Tyson Goldsack, Round 21, 2007
Tyson Goldsack‘s Rising Star nomination in only his 13th game for the club also produced what is still his best disposal count. He had 25 touches against the Swans, and it’s still his personal best for a game.

23. Nathan Brown, Round 10, 2008
Consistency in defence in his first 10 games proved the key to Nathan Brown‘s Rising Star nomination in a 100-point win over West Coast in his first season.

24. Jaxson Barham, Round 4, 2009
Jaxson Barham had the dream start to what would ultimately be a brief AFL career. Wearing his father Ricky’s old No.43, he had 28 touches on debut against Brisbane in round four, 2009, and won the Rising Star nomination from his first game. But not much else followed. He holds the record with St Kilda’s Brodie Atkinson for the least amount of career games for a Rising Star nominee – seven.

25. Brad Dick, Round 11, 2009
Who could ever forget Brad Dick‘s five-goal haul against Melbourne on Queen’s Birthday, 2009, in only his 11th game? But for a few other flashy moments, he never reached those same heights, held back by injuries. He would end up playing 27 games for the club before heading to West Coast where he failed to play a game.

26. Dayne Beams, Round 17, 2009
Two goals and 21 disposals in a big win over Carlton showed Collingwood fans just how good Dayne Beams would become.

27. Ben Reid, Round 12, 2010
He made steady progress during his first three years, but Ben Reid had a memorable 2010 season for many reasons, predominantly the premiership. But he also won a Rising Star nomination after his 17th game.

28. Alex Fasolo, Round 22, 2011
Nineteen disposals, two goals and a Rising Star gong – that all came for Alex Fasolo in round 22, 2011. He had kicked five goals three week earlier but it was not deemed to be his moment. The judges were never going to let that happen this time around, and he capped off a strong debut season by playing in a losing Grand Final side.

29. Ben Sinclair, Round 11, 2012
Playing his 15th AFL game, Ben Sinclair received his nomination for his three-goal effort against Melbourne in Round 11, 2012. It was a perfect Queen’s Birthday for the blond haired man in the No. 28 jumper.

31. Brodie Grundy, Round 22, 2013
Brodie Grundy not only ousted Darren Jolly out of the ruck role in late 2013, he won a Rising Star shout-out for his performance in Round 22, against West Coast. But he only got one vote in the tally at the end of the season, which was won by Jaeger O’Meara (44).

32. Tom Langdon, Round 7, 2014
Tom Langdon won his Rising Star recognition in his seventh game in 2014, when he had 23 touches in Collingwood’s win over Carlton.

33. Tim Broomhead, Round 11, 2015
Twenty five disposals and a goal was enough to lift Tim Broomhead to the Rising Star nomination in round 11 this year.

34. Jordan De Goey, Round 20, 2015
Jordan De Goey got his nomination for his gutsy performance against Sydney at the SCG, when he had 18 touches and kicked a vital goal.

35. Darcy Moore, Round 19, 2016
Darcy Moore played just 34 per cent of the match against West Coast at the MCG. But it was enough for him to kick three goals and two behinds from six marks before injury ended his day.

37. Sam Murray, Round 3, 2018
Months after being traded from Sydney, Murray made his league debut against Hawthorn in round one, and by round three, courtesy of his 21 disposals, seven marks and four tackles against the Blues, found himself on the receiving end of a Rising Star nomination.

38. Jaidyn Stephenson, Round 4, 2018
At just 19 years of age, Stephenson, playing his fourth game, kicked five goals to spearhead Collingwood to its first win in South Australia since 2012. At the end of the season he would go on to become the first Collingwood player ever to win the Rising Star award, with a record count of 52 votes.