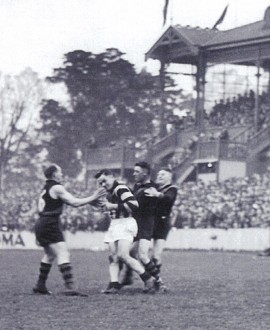 The incident that led to Gordon Coventry's suspension, as Richmond players come in to remonstrate (Reference The Official Collingwood Illustrated Encyclopedia by Michael Roberts and Glenn McFarlane).

Murdoch delivered a number of sharp blows to the back of Coventry’s neck, which was dotted with painful boils at the time.

Coventry, who kicked five goals for the match, retaliated and was reported.

Strangely, the club defended on the basis of Coventry suffering a concussion, not provocation.

Despite his 17-season clean record, he was suspended for the rest of the season.

The Collingwood supporters were angry and gathered outside the VFL on the night of the hearing, and patrons at local cinemas were incensed when the penalty was flashed on the screen.

The Collingwood Council issued protests, Coventry threatened to retire because he was so upset.

Amazingly, without Coventry and Len Murphy (who was suspended during the finals campaign), the Magpies managed to win the 1936 premiership.