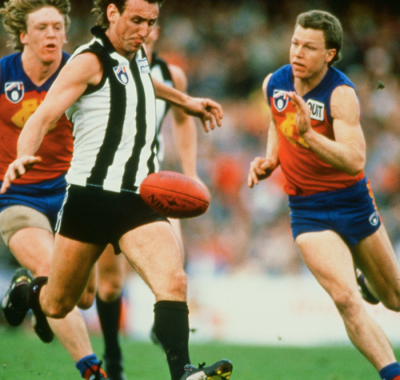 Peter Daicos up against Fitzroy in 1991.

Peter Daicos crafted an AFL career out of making the seemingly impossible not only very possible, but more than likely.

He did it so often, and with such ease, that whatever magic Daicos managed to weave, it could hardly have been a fluke.

And it wasn’t. Far from it.

Some of it was natural – an inherent gift. Most of it was something that he trained for, and somehow managed to perfect.

Daicos defied logic almost as much as he defied the laws of physics, and the Magpie fans lapped it all up.

Ask any Collingwood supporter, and they will speak almost in awe with what Daicos could make a Sherrin do.

Ask them about their favourite individual goal and most of them will point to two of his 549 majestic majors – his wrong-side banana in the 1990 qualifying final draw or his freak, off balanced snap on a sublime night at Carrara a year later.

The one certainty is that if you ask them what was Daicos’ greatest individual game, they will point almost without hesitation to his 13-goal extravaganza against the Brisbane Bears on a dewy night on the Gold Coast in Round 20, 1981.

As Collingwood prepares to go back to the same venue to tackle the Gold Coast Suns on Saturday night, it is well worth remembering back to Daicos’ ‘baker’s dozen’ 22 years ago.

Other Magpie champion forwards have kicked more goals in a game than Daicos did that night.

Incredibly, only 9302 fans were on hand to watch it live, even if the thousands and thousands watched on television from homes and hotels around Victoria and the rest of the country.

Daicos was an exception to many of his teammates in that frustrating 1991 season. There was no premiership hangover for him.

While some of his teammates had a lull in their performances in the early part of 1991 following the 1990 flag, the ever-green forward did not.

After kicking 97 goals in 1990, he still managed 75 the following year. He would manage 19 matches for the year, and failed to kick a goal on only one occasion – in Round 6 against Melbourne (a game in which he still had 21 touches).

But Daicos, then 29, had a purple patch as the Magpies’ season gathered steam late in the season, when he kicked eight goals on successive weekends – against Fitzroy and St Kilda in Rounds 18 and 19.

So it was fair to assume that he was considered a chance to make it a hat-trick of big goal-kicking performances a week later when the struggling Bears hosted the Magpies for the early August match.

The Herald Sun summed that up pre-game when it remarked: “There will be one glaring difference between Collingwood and Brisbane in tomorrow night’s Carrara clash under lights – Peter Daicos. Daicos is the form player of the competition, a claim supported by the magical Magpie’s tally of 16 goals in the past two matches.”

Some dared to even suggest that he might score double figures. The man himself was not so sure leading into the game, as he had never even done that – even in junior games with Preston RSL.

His best individual effort to that date was nine goals kicked for Collingwood against Richmond in Round 10, 1991. He was only 19 then, 13 days shy of his 20th birthday, and playing only his 36th game.

A decade on, Daicos was one of the most celebrated Collingwood players – and in his 223rd match. He would only have 27 matches remaining in his career, but you wouldn’t have known it that night.

As much as Collingwood dominated, in a 101-point annihilation of Brisbane, the Bears had the first chance to score when Brad Hardie looked to have an easy shot at goal from the outset. He missed.

And when Daicos got his first opportunity a few minutes later, he didn’t miss. Not just for the first goal, but for his first 11 shots.

Daicos’ first goal came from the immediate passage of play following Hardie’s miss and his second came at the 20-minute-mark from what was described as “a dubious free kick.”

There was no hint of a football massacre in the opening term. Sure, the Magpies had kicked four goals to one, but the difference was only 15 points at the first change.

Then the second term changed it all. Brisbane scored only one goal, albeit a soccer shot from the bearded Bear John Gastev, who was proving elusive in attack.

Collingwood, in contrast, kicked seven goals, to open up a 54-point half-time lead. Four of those seven came from Daicos, who was proving too good for his opponent in the opening half, Mark Zanotti.

The Gold Coast Bulletin called two of them “trademark Daicos”.

Journalist Gary Howe said: “For one, he cleverly used his body to take opponent Mark Zanotti out of the contest, let the ball float over his head and then coolly grubbed it through from 35 metres out.

“In another, he accepted a deft pass from Darren Millane on the boundary line, stepped around Zanotti and threaded the ball through a needle-eye opening.”

As Daicos recalled later, “He (Zanotti) was a straight ahead, hundred miles an hour type of player, I led him to the ball, let it come past and managed to just kill the pace of it on my left side and then turn quickly. He went straight on and I dribbled it through end on end from about 30m

“There was a lot of pleasure in it because I’d rehearsed that sort of thing. I planned it and it came off.”

Half-time could not have come quick enough for the Bears, and coach Robert Walls spent a fair amount of the break working out who might be able to curb Daicos’ brilliance.

He settled on Gastev, who had been one of the Bears’ best offensive players in the first hour, to try and stop Daicos from adding to his six-goal first-half haul.

But if Walls had known what was going in in the Collingwood rooms at half-time, he might not have been so concerned.

Daicos was feeling crook and there was a real doubt that he would be well enough to recommence the game.

As he would recall more than a decade later in an interview with the Herald Sun’s Michael Horan, Daicos said: “I was sick as a dog. I remember at half-time I spent the whole time with my head down a toilet, vomiting my heart out.

But he would be there when Collingwood ran out and it would be Brisbane who would be left feeling very, very sick.

Just five minutes into the third term, Daicos had a chance to boot his seventh goal, but to the frustration of those watching him live and on TV, he unselfishly gave it off to Shane Morwood, who goaled.

It wasn’t that long after that Daicos kicked one of the most remarkable goals of his career. Even now, more than two decades on, it still makes you wonder how he managed to make it happen.

It’s a fair bet to suggest that Gastev still feels the same.

The Herald Sun described it: “Daicos stole possession of the ball beside the right-hand post with Gastev all over him like a cheap suit, with no visible space between the goals, and Gastev slinging him hard to the ground. Daicos managed to steer a dribbling check side through the middle.”

The man himself explained: “After I was grabbed, I didn’t panic. When I was falling back, I knew I could get a boot to the ball and I knew where the goals were. It looked pretty awkward, but I was pretty comfortable actually.

“In that situation, I would back myself to get my boot to the ball 10 times out of 10. I’m not saying I’d have kicked the goal every time, but I knew I could get my foot to the ball and give it a chance.”

It was as audacious as it was awe-inspiring; as sublime as it was spine-tingling.

And it was a superb goal.

Brisbane’s Matthew Campbell said to a disbelieving Gastev: “This bloke is a freak, he shouldn’t get them like that.”

Daicos could do little but apologise to his opponent. He said after the match: “John Gastev was pretty disappointed with that one, He asked me what a bloke had to do, and I actually apologised to him.

“That sort of thing shouldn’t happen to back men, particularly when you’ve got the bloke covered.”

By the 17-minute-mark of the third term, Daicos had 10 goals next to his name and a new opponent, Danny Noonan. By three-quarter-time, he had 11 goals and Collingwood led by 91 points after a 10-goal (five to Daicos) third quarter.

The second and third terms had yielded 17.8 for Collingwood to Brisbane’s 5.4.

Brisbane’s Marcus Ashcroft, who had 34 touches in the game, and who would later play in three premierships for the Lions (two against Collingwood) could only watch with awe at Daicos’ performance.

When he was a kid, he had followed the Magpies with a passion. And his favourite player was Daicos.

Years later, he would say: “I used to love barracking for Collingwood, especially Peter Daicos, I went to the Collingwood-Carlton 1981 Grand Final and that was the first one I’d been to.

“It was good when we played against Daicos a few years ago except he kicked 13 goals at Carrara. He was rolling them through from all over the place. He was a freak.”

But Daicos wasn’t finished with 11 goals. He would go on to kick two more goals in the final term, pushing himself to 13 goals, as the Magpies stretched out their lead to 101 points by the final siren.

A typically modest Daicos thanked his teammates after the game and said he was lucky.

“I suppose, as a full-forward, it was a perfect day,” he said. “I wouldn’t call it my greatest game, but statistically, it just doesn’t get any better than that.

“It gets back to supply. I was the focal points in a clear-out forward line, and it was great. That game the supply was almost endless and I had the whole forward area to myself to go one-on-one.

“In a situation like that, it’s a bit of an armchair ride. They (teammates) were bringing the ball to you constantly and you have one opponent to beat. If it’s coming down all the time, you get a lot of it.”

Daicos did just that. He had 19 disposals, kicking 13 goals from 17 kicks. His one blemish – a behind – came in the third term. Not surprisingly, he scored the three Brownlow Medal votes.

It would be the last of Daicos’ three Brownlow vote performances, though he would still score two lots of two votes in 1992 and 1993.
Millane and Tony Francis, with 33 touches each, were strong performers on the night; Tony Shaw had 38 touches; and Morwood kicked three goals (including one set up by Daicos).

“I was just fortunate enough to be the last guy in line,” Daicos said.

Walls was less charitable. When he was asked after the game how to stop Daicos, he could only offer up: “…shoot him” with a wry smile on his face.