Peter Daicos kicked eight goals in a match-winning performance against Geelong in round two, 1993.

This match wasn’t simply Collingwood versus Geelong; for much of it, this was Daicos versus Ablett.

The round two, 1993 clash between the Magpies and the Cats was not only an early-season blockbuster; it had the added bonus of taking place at one of football’s suburban battlegrounds, Collingwood’s Victoria Park.

And, fittingly, the game would duly live up to the expectations.

This would be the last time these two great sides would square off on the Magpies’ hallowed turf and it also proved to be a cracking contest, centred on two champions of the game.

Collingwood had beaten Footscray in the opening round of the season; and Geelong, the previous year’s Grand Finalist, had beaten St Kilda in their first game.

Given the limited number of people who could attend Victoria Park matches, many fans were going to miss out on the occasion. The Cats lobbied unsuccessfully with the AFL to have the game transferred to the MCG, but the fact that the home of football already had games scheduled for the Friday night, Saturday and Sunday made that problematic.

In contrast, the Magpies were steadfast that the venue needed to be retained. But they did seek to have the game played live on television, but the AFL wouldn’t allow Channel Seven to do it.

Daicos was coming into the game under a fair amount of pressure. The 31-year-old almost retired after the end of the 1992 season, but the club coaxed him into returning. Ablett, also 31, and born 11 days after Daicos in 1961, was still at the peak of his powers, and clearly Collingwood coach’s Leigh Matthews’ biggest worry going into the match. 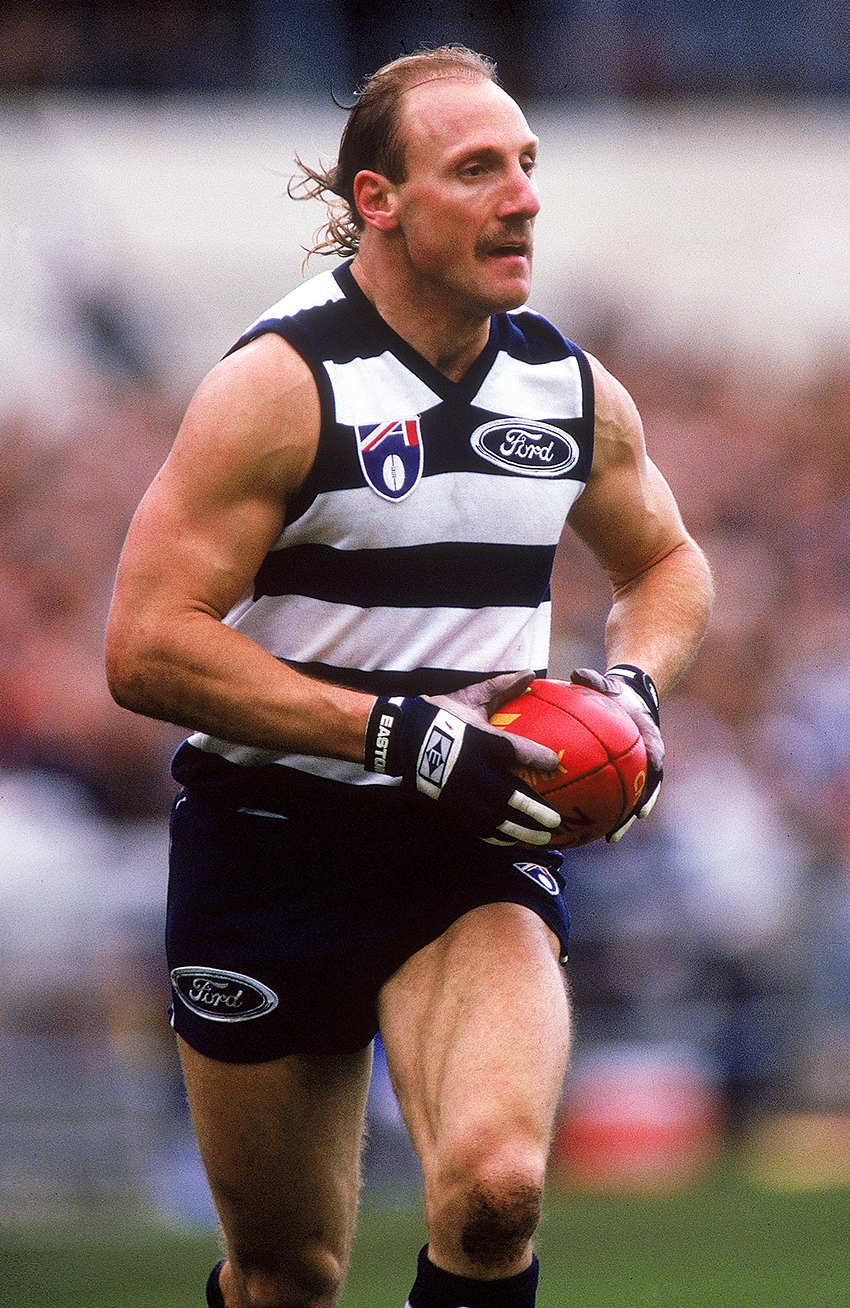 Gary Ablett kicked seven goals in Geelong’s loss to Collingwood in round two, 1993.

In a Herald Sun column days before the game, the Magpie forward said that “in my 15 seasons as a senior player … never has the depth been greater.”

“Maybe that’s why people have been asking me all week how I felt about my own game (against Footscray in round one). It’s a funny thing. Obviously, I have played many better matches of football, but some of those have received far less favourable response from my coach Leigh Matthews. On Friday night, he asked me to perform a certain role, and while a few extra touches would have gone down well, Leigh was pleased I stuck to my task.”

Collingwood took a gamble in selection before the game, bringing in “burly rookie” Glenn Sandford to give some assistance in attack, while Gavin Crosisca was also back in the Magpies’ side.

On the same day, across town at the MCG, a 17-year-old kid called Dustin Fletcher would play the first of his 400 games, in a match where Essendon and Carlton drew after a Stephen Kernahan miss.

A total of 24,147 fans squeezed into Victoria Park on 3 April, 1993, with Magpies president Allan McAlister apologising to the many fans who missed out on seeing the game.

Ablett kicked the first two goals of the match, as well as adding a third goal and two behinds before quarter-time. Matthews had a dilemma – should he stick with Gavin Brown on Ablett or swing an early change? Matthews backed his judgment, and as Ablett tired during stages of the game, Brown helped to set up many forward entries off the back of running off his opponent.

During the second term, Ablett let frustration get the better of him. He was reported for striking Gary Pert with a left-forearm during a fiery second term. It would see the tribunal ban him for two weeks. He kicked a fourth goal soon after, but he didn’t get a touch in the third term. Then he came home with three last-quarter goals to push the Cats closer to their opponents.

But if Ablett was putting on a show at one end, Daicos was faring even better at the other. Those who crammed into the Magpie star’s favourite pockets had the perfect chance to see his artistry in what would ultimately prove to be his fourth last game.

Daicos kicked two goals late in the first term which dragged Collingwood back into the contest. His second came as he read the ball off the pack to give his team a narrow lead at quarter-time. He was looking dangerous, boosted by the home crowd support he was receiving.

The Age recorded: “Sure, he has played well elsewhere, but Daicos trapping the ball deep in the (Victoria Park) pocket, looking up and threading the ball through the sticks from a position where most would hardly bother to try is a performance that deserves its own theatre. Like Jack Nicklaus playing a great round at Augusta, or Don Bradman cracking a century at Lords, a Daicos bag somehow seems even better at Victoria Park. All the more so yesterday because the performance was so unexpected.”

The goals kept coming for the Magpie star, with his eye in, and his tongue out, as he put his team in a winning position. 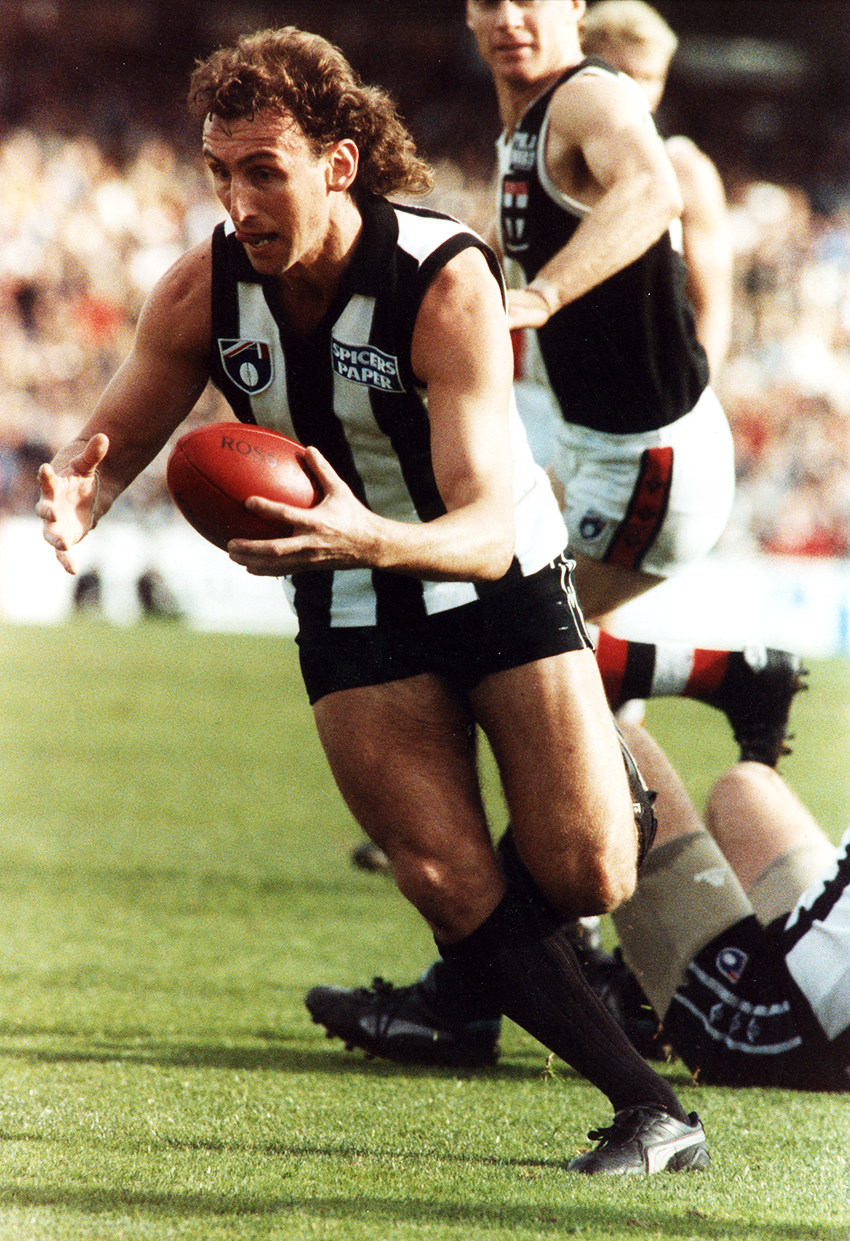 Fans would only witness the magic of Peter Daicos just thrice more after his eight-goal game against the Cats.

One of the best of his eight goals for the game came when in the last term he had three bounces “before pinning himself against the boundary with an opponent bearing down”. It was his seventh, and it put the game beyond doubt.Sensing the moment, Daicos waved to his father as he ran towards the boundary.

He added an eighth goal when he launched a left foot shot around his body when the ball came out of a ball-up stoppage.

Halfway through the last term, the margin was 33 points, and even though the Cats made a late charge, Collingwood never seriously looked like losing the match. The final margin was 10 points.

One interesting sideline to the game was Collingwood’s use of Barry Mitchell, the most expensive recruit of the season. He spent most of the game on the interchange bench. His stats were one kick and one handball, and that kick was partially smothered off the boot.

“It wasn’t his performance today – I mean you can’t perform if you are on interchange,” Matthews said. “We chose to play him there because we had a better 18 in terms of balance.”

Cats coach Malcolm Blight summed up the difference in a handful of words: “We just couldn’t find anyone to stop Daicos.”

In the rooms after the game, Daicos admitted he was delighted with the win, and his return to form.

“Two people I need to thank, who I live with day in and day out, are my wife Colleen and my little daughter Madison who have had to put up with a lot of s— and they’ve been fantastic,” he said.

“When I’ve had doubts I’ve always talked to Colleen about it and she has never been negative about things.

“I’ve got to thank her for the turnaround.”

He couldn’t wipe the smile off his face, saying just what it meant to him to be playing again at Victoria Park: “I would have loved to have been in the outer at the 20-minute mark (of the last quarter) and seen how some of the other guys were acting … It’s all part of the emotion of the game … That’s what it is all about.”

Jubilant Collingwood fans would have said the same thing.

But instead of a rebirth for Daicos, it turned out to be his last great moment in the game. He would only play three more matches – the following week against Essendon, when he kicked two goals, and goal-less games against North Melbourne in round 10, and Sydney in round 15.

That last game – his 250th – was spent mainly on the bench, and it wasn’t the farewell he so richly deserved.

Still, Collingwood fans prefer to recall that memorable day at Victoria Park against the Cats as the lasting image of Daicos’ final season – when he went head-to-head in an enthralling goal kicking duel with Ablett.