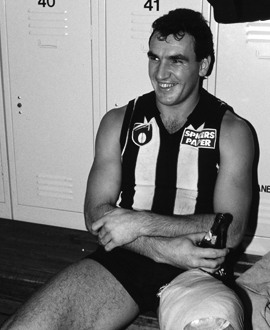 Darren Millane in the rooms after a match in 1991.

On October 7, 1991, tragedy descended upon the Collingwood Football Club when premiership hero Darren Millane died in a drink-driving car accident, sending the AFL world into shock and grief. The 26-year-old had just completed his eighth season with the club and was on his way to catch up with his 1990 premiership teammates.

A player who went into every contest as hard as he could, Millane always put the team and the Black and White guernsey first. The former Dandenong captain played 147 games for Collingwood and was relied upon to grab the strong mark when his teammates kicked out of defense. Originally sought after by St Kilda and Hawthorn, Millane signed with Collingwood in 1984.

His biggest contribution to the club was arguably his role in the Magpies’ 1990 drought-breaking premiership season. In the lead up to the 1990 finals, Millane fractured his right thumb and it was widely thought he would miss the entire series.  From the outset however, an injured thumb was not going to deter him from playing and he relied on taking strong doses of painkiller injections to survive the finals campaign.

After beating West Coast by 59 points in the qualifying final replay, Collingwood made it to the Grand Final with relative ease. In front of 98,944 at the MCG, Millane played a sterling role on the left wing collecting 26 possessions and was named in the side’s best in the 48-point triumph.  The final siren sounded with the ball fittingly in Millane’s hands, a moment that will forever be etched in the minds of Collingwood supporters.

During the season, Millane was simply outstanding winning the AFL Players Association MVP award (since renamed the Leigh Matthews Trophy), was selected in the AFL Team of the Year and finished second in the club’s best and fairest.

After he passed away, Millane became the only player in the club’s history to have his guernsey number (42) retired indefinitely by the club. He averaged 22 touches in his final year at the club. Exactly one year and one day after Collingwood’s 14th VFL-AFL premiership, Millane’s life ended tearing a hole through the heart of the club.

In its official magazine, In Black and White, the Collingwood Football Club published the following only days after Millane’s passing.

“The Collingwood Football Club wishes to pay tribute to Darren Millane – a player who inspired his team mates, whose presence on the field made each and every player stand taller.

It is a tragedy that such a talented, able and likeable person, respected by all who knew him should be taken away at such an early age.

Darren’s exploits were not only on the field but in countless areas away from the club where he would visit, meet and entertain people from all walks of life – sick, injured, handicapped and aged alike.

We will remember Darren always for his courage, his toughness, yet his softness, his love of life and his love of his family.

‘The Young Bull’ as he was known, lived life to the fullest yet gave back so much to those who knew him.

Collingwood Football Club will never forget this young man, a person most prominent in the Premiership year of 1990, who played that final series each week in severe pain from a broken bone in his right hand, and who set an example to be remembered by many a person for the rest of their lives.

In your honour Darren, the club has introduced the “Darren Millane Perpetual Memorial Trophy” – a trophy to be presented annually to the player, judged by his team mates after each game over a season, who did something of specific note in a game or gave an outstanding performance during the day which the players themselves feel requires special recognition”.

The Darren Millane Trophy was first won by Gavin Brown. The October 1991 edition of In Black and White described Brown’s award, received at the 1991 Copeland Trophy Dinner only three days after Millane’s passing as follows: upon receiving the award

“Gavin is renowned for his strength and determination in one-on-one battles and is an inspiration to his teammates. As a tribute to this, Gavin won the inaugural ‘Darren Millane Perpetual Memorial Trophy’. This trophy is awarded by the players who give votes after each game every week to the player who has inspired the team by performing a particularly tough or spectacular piece of play or who has contributed with excellence throughout the game thus spurring on his teammates. Gavin said he was greatly honoured to receive the award and as it carried the name of Darren Millane, he would treasure it above all others”.