Dealing with the bye

How does Collingwood fare after the bye? In the lead-up to Friday night’s clash with Fremantle at the MCG, we take a look at how the Magpies have dealt with the “dreaded bye” since its return in 2011.

2015
The week before the bye: Defeated Greater Western Sydney by 42 points, at the MCG
The bye: Round 12
The week after the bye: Lost to Fremantle by 7 points at Subiaco

Collingwood was sitting comfortably in fourth position on the ladder during last year’s bye, having won eight of the first 11 games.

But the task of coming up against top of the table Fremantle at Subiaco loomed as a significant challenge for Nathan Buckley and his team.

While the Magpies did not return home with four premiership points, they showed enough in the seven-point loss to suggest that the week off hadn’t had a detrimental impact on the team.

If it hadn’t been for a four-goal haul from Michael Walters, and a brilliant game from eventual Brownlow Medal winner Nat Fyfe, the Magpies might have even emerged with the win.

The visitors kicked three of the first four goals, led by two points at each of the first two breaks and were all square with the Dockers at three-quarter-time.

But not even another big performance from Scott Pendlebury could lift the Magpies over the line. What had looked for a time like being a five-game winning streak ended up in a frustrating near-miss for Collingwood.

Consecutive goals to Jamie Elliott and Paul Seedsman put the Magpies five points in front 12 minutes into the final term. But just as Magpie fans watching from back home on television were starting to think a big upset was on the cards, Michael Barlow and Walters chimed in with the final two goals of the game.

Buckley praised the hard work of players in dealing with the parochial crowd, saying: “the effort was great, we didn’t get the points … (but) our pressure was huge.”

“Freo had to play pretty well to withstand our pressure and get the result. Not many teams can withstand that onslaught of pressure for that long.

“It’s a strong effort on our behalf to continue to put that on and obviously by Freo to be able to buffer it enough to be able to get the win.”

But disappointingly, this spirited effort was the start of a six-game losing streak which put an end to any ideas of a finals series, and only two more wins came for the rest of the season. 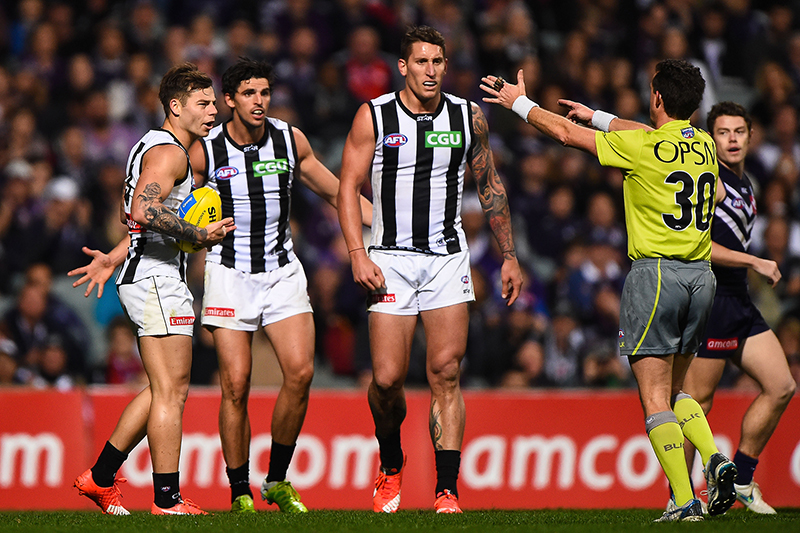 2014
The week before the bye: Defeated Carlton by 34 points at the MCG
The bye: Round 8
The week after the bye: Lost to Adelaide by 21 points at Adelaide Oval

Collingwood could hardly have been more impressive in the first half of their 2014 ‘match after the bye’ against Adelaide, in their first game at the newly redeveloped Adelaide Oval in 2014.

Three goals to one came in the first term, and the Magpies – then fifth on the ladder – managed to hold on to a one-goal lead at the major interval.

But despite all that good work, and to the frustration of the coach, Collingwood kicked only one goal in the second half, compared to Adelaide’s five.

The difference at the end of the game was 21 points.

A bloke named Patrick Dangerfield was the best afield with 32 possessions and Josh Jenkins kicked four goals for the home side.

In contrast, the Magpies struggled to convert, finishing with only seven goals, with Jarryd Blair kicking two, and Scott Pendlebury having 32 disposals.

The duel between 15th-gamer Brodie Grundy and Sam Jacobs was one of the highlights of the contest. But missed shots to Dayne Beams and Blair late in the game cost the club any chance of staging a late revival.

Sadly, that reflected the rest of the season. A string of three successive wins came after that Adelaide loss, but injuries and inconsistency in the second half of the year meant the finals were out of the question.

Patrick Dangerfield had 32 possessions as Adelaide defeated Collingwood by 21 points.

2013
The week before the bye: Defeated Western Bulldogs by 34 points at the MCG
The bye: Round 13
The week after the bye: Lost to Port Adelaide by 35 points at AAMI Stadium

Collingwood was seventh on the ladder, two games clear of Port Adelaide, when the teams met the week after the Magpies’ bye week off in Round 14, 2013.

The Magpies went in as slight favourites, even though the venue was Adelaide. But the Ken Hinkley-coached Power produced a stunning upset victory.

Buckley said Port Adelaide played “finals-like, top-eight pressure”, predicting the Power were more than capable of chasing what had much earlier looked like an improbable finals berth.

He was less complementary of his own side, saying the Magpies’ sloppy skills just couldn’t stand up under Port Adelaide’s pressure.

Admittedly, Buckley’s team had been rocked by injury in the first three months of the season, and there would be more to come.

“We weren’t clean with the ball at all, clean in the contests – or as hard as Port were,” Buckley said. “We had our chances and didn’t take advantage on the scoreboard; when Port had their chances, they took them.

“We have got some work to do. We’re on a path and we’re learning a style of game that we think is going to win games of football against the best.”

The two teams would meet again, in an elimination final, and just as the case was in Round 14, the Power emerged with the victory, this time by 24 points. 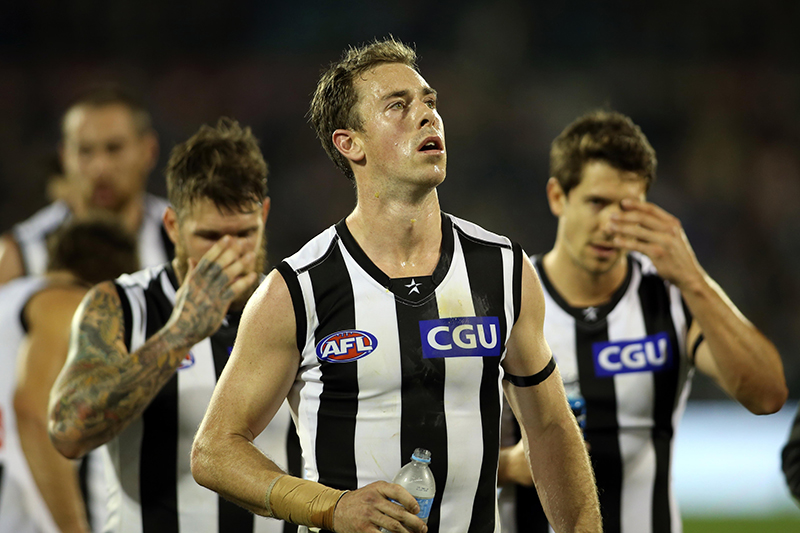 Nick Maxwell leads Collingwood off AAMI Stadium after a 24-point defeat at the hands of Port Adelaide.

Collingwood charged to the top of the AFL ladder in the week after the bye in 2012, knocking off West Coast and recording its 10th win from 12 games.

Five of the club’s 12 goals came from Travis Cloke, as the Magpies held on to win a classic by three points.

Collingwood led by 27 points at the 21-minute-mark of the third term, and retained a 16-point break at the last change.

But West Coast stormed home. Three goals to the Eagles in the first half of the final quarter changed the contest as the visitors suddenly snatched the lead.

But a poor tackle from Beau Waters left Dayne Beams with the chance to put the Magpies in front, and he did so at the 18-minute-mark, with his third goal.

From there, Buckley’s team held on grimly to their lead, and managed to still be three points in front at the final siren. 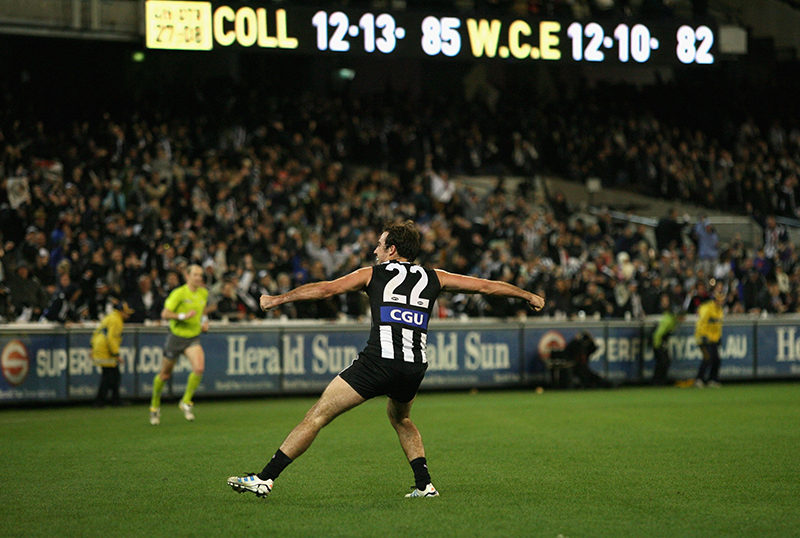 Steele Sidebottom celebrates with the Magpie Army in a thrilling Collingwood victory.

Two undefeated teams, a Friday night blockbuster, and it proved to be an epic fight to the end. What more could you possibly want?

Well, a Collingwood win for a start, but unfortunately that didn’t happen against Geelong in the Round 8 clash before more than 81,000 fans at the MCG.

The Magpies had barely been tested since the previous year’s Grand Final draw when it took on Geelong the week after their bye in 2011.

It turned out to be a taste of what was to come later in the season.

The Magpies and the Cats went at each other in a classic encounter, with Geelong scoring by three points.

In a match where the lead switched on several occasion, injuries to Alan Toovey and Cameron Ling hurt both sides.

When an Andrew Krakouer goal put the Magpies 11 points up early in the final term, it seemed as if the reigning premiers would have the advantage.

But goals to Jimmy Bartel and James Podsiadly had the Cats up by 10 points with 10 minutes remaining. Then Dale Thomas nailed a much-needed goal at the 22-minute-mark, but the Magpies couldn’t conjure another score. And Geelong held on by three points.

Anyone who saw the game live or on television knew these two teams were the ones to beat, and that this game was likely to provide the 2011 Grand Finalists. 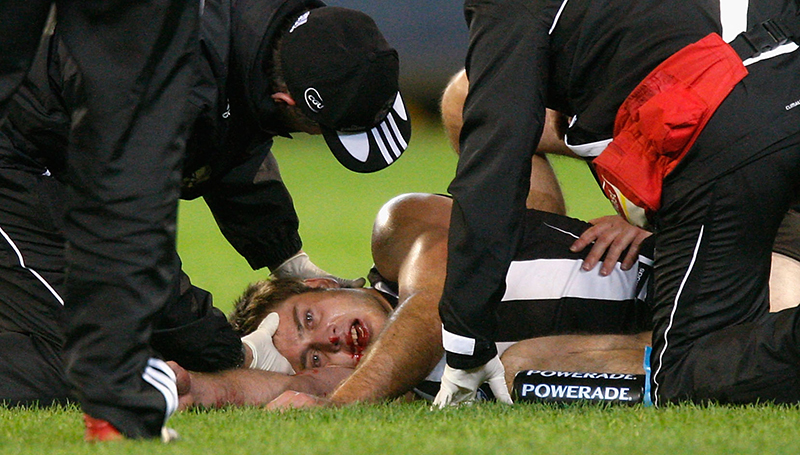 Alan Toovey is assisted by trainers after a collision with Geelong’s Tom Hawkins.

Sydney kicked more goals than Collingwood in the club’s second bye for 2011, but the Magpies still managed to secure the four premiership points – in spite of a wayward score-line of 13.21.

Incredibly, the visitors had 11 more scoring shots and 16 more inside 50s than the Swans, but the victory was only six point one.

Coach Mick Malthouse was pleased with the result, but not the method of it, saying he couldn’t understand what had gone wrong with the Magpies’ goal-kicking.

“Can’t explain (it) … I don’t think anyone can explain how we missed shots on goal like we missed,” Malthouse said. “We controlled enough of the ball to put it beyond their reach.

“I get very disappointed with the execution, but no one means to miss a goal.”

But just as concerning as the missed shots at goal was the issues both sides had with the controversial ground. This time the main cause for concern was the fact that several 10cm U-shaped metal pegs were discovered during the course of the ground, not stuck into the surface, but lying on the grass.

No one was hurt, fortunately. But the incident could have been far worse than it was. 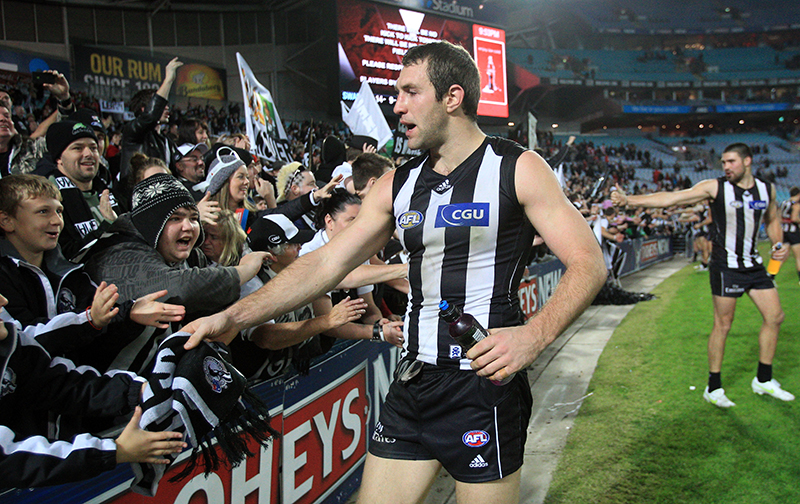 Travis Cloke celebrates with fans after kicking six goals against Sydney in round 14, 2011.