Scott Burns won 24 disposals in Collingwood's 61-point win over North Melbourne in round 15, 1996.

Tony Shaw knew it was time to pull the trigger. It was early in the first term of Collingwood’s clash with North Melbourne in round 15, and Wayne Carey loomed over this contest almost as large as the MCG light towers.

The first-year Magpie coach had to sit and watch Carey kick two goals within four minutes, easily outpointing young Magpie defender Andrew Schauble, to give his team a near-perfect start to the game.

Shaw had to make a change, and even if it meant robbing Peter to pay Paul, he knew that only one man could potentially stop, or at the very least, negate the most exciting player in the competition.

He sent the runner out, and told the club’s most important player, Nathan Buckley, that he needed to move onto Carey. Yes, Bucks was silk, but he desperately needed him to take on a defensive role this afternoon.

Buckley had copped some criticism from supporters at stages of that season, mainly due to the fact that some fans believed he was a certainty to take up an offer to the join the new AFL side, Port Adelaide, for the 1997 season. They had even been a few unfair and uncharacteristic boos thrown in for good measure at times, which seemed ridiculous, and Shaw could barely believe people were questioning Buckley’s form and future.

It was July 13, 1996, and the Magpies’ first season under the new coach had long since unravelled.

While North Melbourne was on top of the ladder and a clear-cut premiership favourite in the AFL’s centenary season, Collingwood was coming off eight consecutive losses that had pushed the club down to 13th. And going into this game, the injury-hit Magpies hadn’t beaten the Kangaroos in four years, and few people gave them any chance of changing.

Few people considered an upset was even a remote possibility, although Kangaroos coach Denis Pagan conceded later that he was a little worried when he saw a few of his players lairising at training during the week. He had issued them a pre-game warning against complacency, saying: “You strive to get to the top of the ladder, then when you get up there, you’re a sitting duck for everybody and you’ve got to pay a price for being No. 1.”

North Melbourne was finally looking the premiership side they had threatened to be since Pagan took over as coach three years earlier. The Magpies were in a different phase, many of the club’s 1990 premiership players had moved on, though quite a few remained, and Shaw had replaced Leigh Matthews as coach for the 1996 season.

Collingwood had won four of Shaw’s first six games as coach, but that eight-game losing streak – the worse since 1982 – had brought a reality check of where the playing list was at.

This was reflected in the changes the coach made for the clash with the Kangaroos. Shaw dropped Paul Sharkey, Chad Liddell, Jon Hassall and Trent Hotton, replacing them with premiership ruckman Damian Monkhorst, who had recovered from injury, former Roo Robert Pyman, Steven Pitt and first-gamer Jason Bevan.

This would be one of only two games in Black and White for Bevan, recruited as a midfielder from South Adelaide, and he would be named in a back pocket. He was one of four players that day yet to play 10 AFL games, along with Robbie AhMat (sixth game), Pitt (sixth game), and eighteen-year-old defender Simon Prestigiacomo (fifth game).

In all, the Magpies who took the field that day against the Kangaroos had played a collective 1326 games; their opponents had almost 1000 games more experience in their line-up.

Gavin Brown and Gavin Crosisca were the most senior Magpies, playing their 175th game that afternoon, while Buckley was representing the club for his 59th game in Black and White. Many thought there would not be much more to come, as the consensus was that the lucrative offer from Port Adelaide would be enough to attract him back to South Australia.

Shaw desperately hoped that the club could hold onto to its most exciting player.

And Collingwood was backing key forward Saverio Rocca, the club’s Copeland Trophy winner from the previous year, to shrug off a shoulder injury, to make a difference in this game.

North Melbourne took the early lead and it seemed as if the football status quo was going to remain. Everything pointed to a Kangaroos’ win and even the Herald Sun preview to the game had forecast: “A quality side in form and seeking to shore up a double chance in September against a depleted, out of form team in decline? No way Pies.”

And Carey’s opening to the contest only seemed to highlight the difference between the two sides.

The Buckley move had been a risk, but a calculated one. Only time would tell if it would pay off.

In the meantime, the second term was just as close as the first, even if it was Pagan’s team that was wasteful this time around. The Roos added 2.6 to the Magpies’ 3.1, and the underdogs were a point ahead at half-time.

Strangely enough, it was Collingwood, not North Melbourne that seemed to be prepared to do most of the heavy lifting after the main break. The Magpies kicked the first four goals of the third term, and that came off the back of a dominant midfield, sans Buckley, which saw the likes of Scott Burns, Paul Williams (also spending time forward), and a red-headed 20-year-old called Jason Wild, in only his 21st game, performing well.

Importantly, Carey was kept quiet. Time and again, Buckley took his opponent deeper up the ground, and it made a difference.

The player who had appeared set to become the match-winner was kept in close check. He would kick only one more goal for the game, and his 11 disposals were 20 less than Buckley would have for the Magpies.

Asked later about his rationale for putting Buckley (186cm and 91kg) onto Carey (192cm and 96kg), Shaw would say: “He’s got a great leap, he can always get a hand to it and at ground level you’d have to think he’s a bit quicker. And he knows how to read the play.” 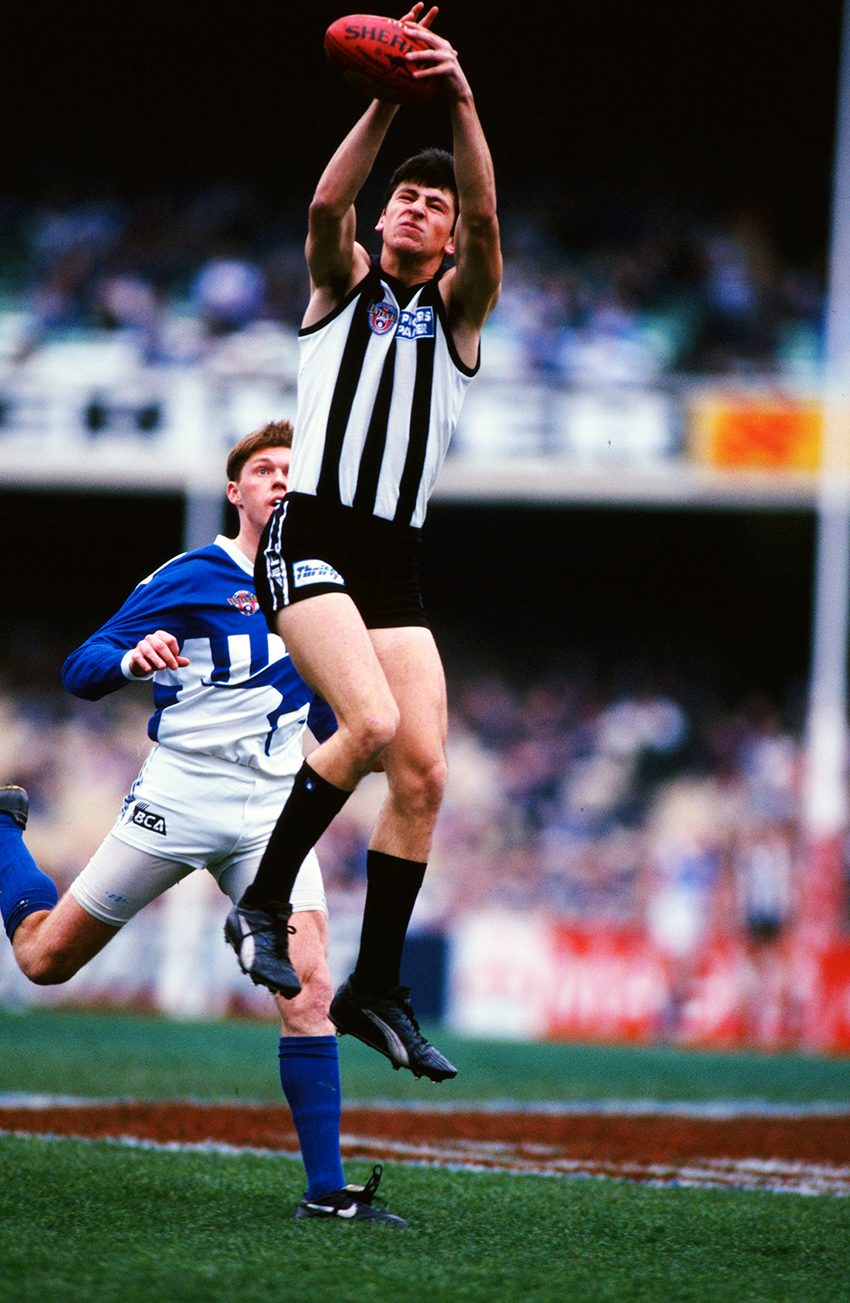 A young Simon Prestigiacomo marks on the wing in front of Mark Roberts during Collingwood’s upset win over North Melbourne.

That’s how it panned out. Carey’s influence waned and Buckley’s shone.

St Kilda Brownlow Medallist Neil Roberts, writing in the Sunday Herald Sun, said of Buckley: “It was good to see (him) answer his many critics. He played as though he wanted to kill the ‘King’, and he did. So complete was his eclipse that he cheekily began to run off Carey deep into the forward line as early as the first quarter.”

His desperation seemed to sum up Collingwood’s approach.

Desperate to win after so many losses, and sensing an opportunity, the Sunday Age declared Collingwood “played like a team fed-up with losing”, while the Kangaroos played as if they were seemingly satisfied, the very mood that Pagan had warned against.

An eight-goal third term for the Magpies pushed out the margin to 21 points at the last change, still far from a safe margin, but enough to give the faithful some hope that a breakthrough win might just occur.

North Melbourne had kicked a goal via Corey McKernan at the 25-minute-mark of the third term, cutting the difference to eight points, but the Magpies had managed to push it out again by three-quarter-time.

Pagan must have hoped that would be the start of a revival to peg back the difference. It wasn’t. Incredibly, it would prove to be his club’s last goal of the match.

When Paul Williams exploded away with the third of his five goals within the first minute of the final term, it set the scene for what was to come. Collingwood would kick the last 10 goals of this remarkable game, including seven in the final term.

This wasn’t just an upset win; it was a flogging. The Magpies had kicked 15 goals to five in the second half, a 61-point win that shocked the crowd of 34,514 in attendance.

Rocca had kicked 41 goals from his 11 games before this match. He had been solid in the first half of the season, but he had a blinder on this afternoon, beating Mick Martyn, and kicking eight of his team’s 22 goals.

Williams’ five goals could so easily have been more, as he also finished with four behinds.

And the most unlikely source of goals was Pitt, who kicked four goals in a great display.

Pitt, the last pick in the 1995 National Draft, had previously kicked only one goal from his first six games. But the 22-year-old South Australian, recruited from Norwood, would produce one of his best games in Collingwood colours. He would also kick four goals a fortnight later against Footscray.

This would Pitt’s one and only season with the Magpies. By season’s end, he opted to return to Adelaide, to resume his work as a police officer. He would later play five games for Melbourne in 2000-2001.

Pagan was far from impressed with his side’s loss to Collingwood that day, saying: “It was a matter of life and death for them (Collingwood).”

“We were in the comfort zone . . . we didn’t have one bloke in the side put his hand up. I had been really concerned … a couple of guys had been lairising at training during the week and we had spoken to the team about the dangers of this game.”

As frustrated as he had been with the previous two months, Shaw told reporters after the game: “It was time to stand up and say we’re sick to death of bloody losing and we were going to make a statement. No doubt the group did it as a whole. I look back at the game and see a lot of individual efforts that seemed fantastic.”

The return of Monkhorst to the team made a huge difference, as he staged a great duel with Corey McKernan. It was described as the “Monkey the dinosaur versus the mobile McKernan”, but both players played important roles for their team. Shaw said: “Monky is a big part of our team, but we haven’t had him. I think he showed he was going to stand up and the group followed him a lot.”

Shaw said he could not believe that some people had questioned not only Buckley’s earlier performances, but also his commitment to the club, saying he had always struck him as a loyal team man.

“It’s a tall-poppy syndrome with the kid,” Shaw said. “He’s only had two bad games this season and in all the others he’s been in probably our best three or four players and he’s copped heaps.

“It’s a disgrace for the football public. People just don’t see what this kid can do.”

The Herald Sun thought his performance might have been part of the farewell tour for Buckley, saying: “It is a tragedy the Magpies will lose him to Port Power next season.”

Fortunately, for Collingwood, Buckley turned his back on the Power’s bucks, and pledged his allegiance to the Magpies. Shaw’s team would win five of the last eight games of the season, finishing with a 9-13 record.

But that round 15 win over North Melbourne was a high point of Shaw’s first season as coach. Consolidation of that came when the Kangaroos won the 1996 Grand Final, against Sydney, less than three months later, with Pies fans at least able to boast that they had beaten the premiers by 10 goals.