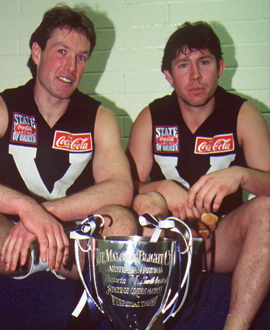 Gavin Brown, captain of the Victorian side, and Brett Ratten in the rooms after the 1997 win over South Australia.

The E.J. Whitten Medal is awarded to the best Victorian player in a State of Origin football match.

The award is named after the late and great Ted Whitten, also known as “Mr. Football”, who played for and coached Footscray and known for his role in Victorian football.

He played 29 games for Victoria, and coached the state side nearing his death of cancer in 1995.

Gavin Brown is the only Magpie to have won the award.  He played 11 matches for Victoria including captaining the side in 1997.