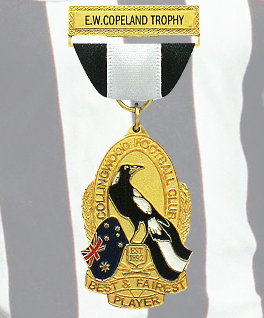 The Trophy awarded to Collingwood’s best and fairest at the end of the season is in honour of not a player but a working man.

Copeland was secretary of the club from 1895 to 1923, a period considered to be the most vital to Collingwood’s existence.

Chief clerk in the Metropolitan Gas Company, Copeland’s business ability was put to the advantage of the club in a time when financial matters were considered of vital importance.

Copeland’s first order of business was to develop and restore Victoria Park into a ground that was suitable to hold matches on.  In previous years, the maintenance of the ground was overlooked at therefore Victoria Park was dilapidated and rundown.

Copeland was appointed secretary of the Victoria Park Council which was established in 1898.  Through his direction, funds started to creep in (admission sales and grants) and the ground soon flourished incorporating grandstands and various facilities for the spectators.

In 1915 the League was in danger of being cancelled due to media and public uproar over the belief that football was a distraction from the gravity of the war effort and that players’ wages were an impediment to enlistment.

The VFL agreed to continue the season that saw Collingwood finish the year as minor premiers. The team, however, lost to Carlton by 33 points in the Grand Final.

Copeland’s service as secretary ended in 1924 when he retired due to business commitments. He did take up position as vice-president for two more years.

In his 29 years as secretary, Copeland, known as “Bud” because of the fresh red rose he wore in his lapel, never had missed a Collingwood game.

The club honoured his devotion to the club with naming Collingwood’s trophy for best and fairest player after him.

The trophy was enacted in 1927 and has been awarded to Collingwood champions including the first winner in 1927 (Syd Coventry) to six-time winner Nathan Buckley.

Notes
•    Copeland supported Richmond’s motion to be included in the VFL. It is argued that he was the defining factor in the VFL’s selecting of Richmond, ahead of North Melbourne, as the tenth team in the competition.