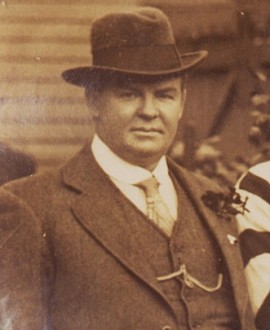 Ernest 'Bud' Copeland played a key role as secretary of the club.

Ernest ‘Bud’ Copeland never wore the famous black and white jumper, but his stamp on the club was as much – if not more – than any footballer in the first three decades of Collingwood’s existence. What he did wear was a fresh red rose on his lapel each day which led his nickname ‘Bud’.

As Richard Stremski, author of Kill For Collingwood, said in a club publication in 2001: “Players come and go, but the administrators are the ones who actually make the club strong. The players might make the team strong, but not the club. Ern Copeland was the one man that put the club on its feet.”

It is not an exaggeration to suggest that the colossus that is Collingwood might not be here today if it had not been for Copeland’s indefatigable and resourceful management, particularly in the mid 1890s as the fledgling club fought to remain afloat in a sea of economic turmoil.

One of Collingwood’s earliest annual reports lists E.W. Copeland as an auditor of the club’s books in 1894 – the club’s third season – but he would take over the part-time and immensely important role of secretary a year later just as the club faced a debt crisis.

As the 1890s depression cut deep into individuals and institutions across the country, Collingwood too faced an uncertain future. Membership dropped, attendances were affected and the debt associated with the club’s grandstand swelled to almost unsustainable levels. Liquidity became a monthly, almost weekly issue for the club.

So was it any wonder that the young clerk from the Metropolitan Gas Company (he was 27) was initially reluctant to take on such an onerous assignment. Fortunately for Collingwood, he almost didn’t have a choice.

The club’s annual report on his retirement in 1924 recalled: “In 1895, after three years of rather precarious existence, the committee of the infant Collingwood club were faced with the problem of appointing a new secretary. Mainly through the efforts of Messrs Alf Cross, J. Joyce, J. Manning and the late Tom Sherrin, he (Copeland) was induced to accept the position. Without any previous experience of football management, he was an immediate success.”

Copeland was able to secure a 74-pound loan from a local councillor that helped to buy the club the time it needed, and in the meantime, he was doing everything in his power to increase attendances and cash-flow with a series of events and functions that would prove a life blood.

By the start of 1896, he started a “Cycling Carnival” at Victoria Park “for the benefit of the funds of the local football club”, according to the Argus. Fortunately, the event “attracted a large crowd and furnished some excellent racing.” And with it came the currency the club so desperately required.

By the end of that season, Collingwood had won its first premiership – the 1896 VFA flag – and Copeland’s ambitious plans for a better business model and for continued improvements at Victoria Park were starting to bear fruit.

Discipline was an early key to Collingwood’s success, and stable management was something that the great Jock McHale, who came to the club in 1903, believed was paramount to the success that it both courted and attained. Copeland was critical to this.

Stremski said: “The secretary really did everything. Ern imposed discipline both team-wise and administration-wise, and he was a magnificent fund-raiser.”

“When Collingwood owed a thousand pounds, he had to go out and borrow money to pay off immediate debts. Then he organised cycling races around the edges of Victoria Park to generate revenue, particularly in the off-season. He organised fairs and (fancy dress) balls and anything that would raise money. He gained for the club a very powerful interest in actually managing Victoria Park and thereby gaining more revenue for the club.”

One such fundraising venture, the Fancy Fair and Art Union, returned a massive 410 pounds in 1897 – the year that Collingwood first played in the VFL.

In attracting crowds to Victoria Park, Copeland courted women and families, talking up the football as “a place where men would feel no regret or shame to take their wives, sisters and lady friends.” That’s a great Collingwood tradition that stretches to today.

Although he was willing to impose a strict code of discipline on the club, the players had enormous respect for their secretary, as evidenced by an incident in 1910. During the half-time break of a game against Essendon, Copeland was abused by a group of disgruntled fans, who had circulated a petition calling for his replacement and that of the committee.

It was, as the club described it, “a disgraceful and totally unwarranted demonstration.” Copeland had to be talked out of quitting, but the club and players did more than just that.

As Collingwood historian Michael Roberts said in The Mightiest Magpies, “The incident infuriated the players, who had a deep respect for Copeland, and appreciated all he had done for the club in rescuing it from financial peril.” So much so, that they organised a night for Copeland and the committee at Dennington’s City Hotel in Johnston Street.

The Argus said: “The little demonstration against the popular hon. Secretary (Mr E.W. Copeland) has fizzled out, as everyone expected it would. The only result has been to weld the Collingwood team together to show their resentment of the annoyance to which Mr Copeland was subjected.” That much was certain when the Magpies went on to win the premiership at the end of the 1910 season.

Copeland was one of the keenest advocates for maintaining league football through the dark years of the First World War. He believed the game provided for “the workingman’s relaxation on his half holiday” and Collingwood kept playing all through the hard times, winning the 1917 premiership and the first “Peace Premiership” of 1919.

He carried on serving the club through the early 1920s, though the pressure of his career with the Metropolitan Gas Company meant he often spoke of retiring from Collingwood. Finally, in 1924, Copeland could no longer balance the two roles.

The club spoke in revered tones when he retired from the role: “(Copeland’s) name is synonymous for efficient football management wherever the Australian game is played. It is unanimously agreed that Mr Copeland has proved the ‘Prince of Secretaries.’ For several seasons he has been anxious to retire, but yielding to the wishes of the committee, he has remained in office until now business responsibilities compel him to withdraw.”

Collingwood organised for him as testimonial smoke night and presented him with 100 guineas.

Copeland served for two seasons as a vice-president, and remained a passionate fan of Collingwood for the remainder of his days, long after he retired from the Metropolitan Gas Company in 1933. In recording his retirement from business, the Argus said he had been regarded as “the man who ‘made’ the Collingwood Football Club.”

At his final match watching his beloved Collingwood lose the 1946 preliminary final to Essendon, Copeland “collapsed” and was rushed to the Royal Melbourne Hospital. He regained his health for a time, but was dead the following March on the eve of another football season.

“The Prince of Secretaries” was gone; but the foundations of the football club that he helped to secure remain forever.