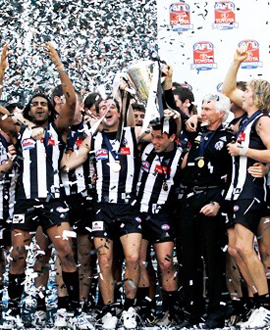 We'll be celebrating the 10th anniversary of our 2010 flag this year.

FEW, if any, premierships have been as difficult to attain as the metaphoric mountain Collingwood had to climb to secure the 2010 flag.

As it turned out, the Grand Final against St Kilda ended up being played out across EIGHT quarters, not the usual four, given the first game ended in a dramatic, chaotic draw.

The two teams were locked together on the same score – the third and now last time it would happen in a Grand Final – which necessitated a replay the next week.

In the space of four hours, what happened in the drawn and replay games will go down in folklore, and will forever be recalled by Magpie fans who ended up being almost as exhausted as the players, and mentally drained by the events on the footy field they couldn’t control.

In the end, there were a handful of moments which stand out in the memory from that spine-tingling seven days that will be recalled forever.

It’s hard to believe there were some (not Magpie supporters, mind you) who doubted Collingwood’s 2010 captain Nick Maxwell. The comeback to them should always be ‘Go back and have a look at the last quarter of the Grand Final draw’.

Do that, and you will find a footballer who did everything in his power to try and save, and then try and win his team a Grand Final!

Maxwell’s last quarter heroics were extraordinary. Time and again, his desperation was critical to Collingwood’s fortunes that day, as it had been throughout his career.

One of the biggest moments of the 2010 Grand Final came about 18 minutes into the last quarter. The Magpies were clinging to a one-point lead, there was seven minutes of game time on the clock and St Kilda appeared to have the momentum.

A stoppage inside the Saints’ forward 50m ended with Maxwell’s counterpart Nick Riewoldt getting hold of the ball and slamming it onto his boot in the general direction of goal. It evaded a horde of players around the contest and bounced towards goal as the Magpie army held its collective breath.

The only man between the ball and the goal line was Maxwell, who chased desperately as the ball bobbled up and down. It looked like a certain goal.

Then, Maxwell launched himself at full stretch, and somehow extended his hands to touch the ball just before it crosses the line. It was stirring, inspirational stuff.

As Denis Cometti said: “Maxwell tracking it back, touching it right on the line … watch it again, for a moment it looks gone … he does brilliantly.”

The slow-motion replay and aerial shows the full extent of Maxwell’s effort to get to the ball to touch it. Contrast that with the image of the anguish on the faces of the St Kilda supporters who had, for the briefest of moments, thought it was a goal, and that the flag was headed back to Moorabbin.

As Scott Pendlebury said on The Final Draw, “That’s why he was the captain.”

Not content with his first act, Nick Maxwell played just as important a role in what would be Collingwood’s last goal of the 2010 Grand Final draw.

The Saints led by five points, with less than four minutes remaining, when a clearing kick from Sam Fisher looked for a target in Sam Gilbert on the wing on the AFL members’ side. Stationary, Gilbert looked set to take a steadying mark.

But Maxwell, a player in full motion, had other ideas. He came in from the side and launched himself at the contest, edging his opponent out of the way, taking a stirring mark. Better still, sensing the time ticking away, he immediately turned around and played on.

He took a bounce and his little chip kick found Alan Didak, who followed the club’s game plan by pushing out deeper towards the boundary line where he found Steele Sidebottom, who then chipped to a loose Brent Macaffer.

Macaffer ran to almost the 50m line and fired the ball deep in towards the square.

Chris Dawes was edged off the ball and fell to the ground as Heath Shaw almost dragged down a mark. Almost inexplicably, the ball fell to Dawes, still on the turf, and he had the good sense and accuracy to handball to Travis Cloke who was beside him.

Cloke stepped into the goal square and slammed it though the goal that put Collingwood in front again – by a point.

As Tom Harley said: “It was a typical Collingwood build-up, it went down the line …”

Yes, there was plenty to play out in the next 205 seconds of game time – that Lenny Hayes point, the bounce of the ball that evaded Stephen Milne and the desperation of the Collingwood defence – but without that Maxy mark, there might not have been a draw.

Chaos ensured after the Grand Final draw, but a handful of select people from Collingwood helped to provide some certainty to what was an uncertain time.

Eddie McGuire was one of those who made sure the lessons of history would be understood.

Remembering the stories of what had happened in 1977, after another drawn Grand Final, the president made sure the Pies players still attended the Grand Final dinner; St Kilda’s players did not.

There, at the function that night, coach Mick Malthouse set the scene for the week ahead.

In a stirring speech, directed at the players, but which also gave some strength those around the club and those barracking for it, Malthouse declared that the drawn game had simply meant it was “half time”, with four more quarters to play.

It provided a message of hope, not lost opportunity; of confidence rather than of dented pride.

He gave his players great praise for the way they had fought back when the game looked to have slipped their grasp, and for holding on when they had to.

“We are in the same place as we were eight days ago,” he said, leaning defiantly into the microphone.

He expressed his faith in the club’s conditioning staff to ensure the players would be ready for another shot at the flag, and said the players’ experiences in the preseason camp to Arizona had steeled them for what was to come next.

Then he finished with the message that summed up the club’s week ahead, which have now gone into folklore.

Collingwood was desperate to make a fast start to the Grand Final replay and had much of the play in the first 20 minutes.

For all that, two goals (to Tyson Goldsack and Ben Johnson) were the only rewards.

So when Nick Riewoldt was lurking deep in attack – seemingly all on his own – and the ball was sailing to him at the 20-minute-mark, the hearts of Collingwood fans every sank. It seemed certain the Saints were about to get their first goal.

Almost from nowhere, the Collingwood defender emerged to produce one of the most inspiration single passages of play in Grand Final history.

“The Smother of the Century”, as Shaw would later call it with a smile”, was precisely that.

He snuck up on Riewoldt “like a librarian”, as Dennis Cometti so perfectly put it, and knocked the ball from the Saints’ skipper hands, through for a behind.

Shaw recounted: “I thought, ‘You don’t die wondering … I might as well have a crack at it’.”

That one desperate lunge would be the defining moment of the game, a sign of what the Collingwood players were prepared to do to win the flag.

It was an extraordinary team-lifting moment, one that his teammates couldn’t help but be inspired by, and one that will be remembered forever.

What is less frequently recalled is the following passage of play that saw the ball move from one end of the MCG to the other. From the kick in, the ball wound its way down to the other end, resulting in Brent Macaffer kicking a goal to put the Magpies in front by 19 points.

The Magpies never looked back from that moment.

He had torn a pectoral muscle leading into September, but was determined that it wouldn’t stop him from chasing that premiership dream.

The fact that he produced one of the best moments of this Grand Final – at the 15-minute-mark of the third term – was a remarkable achievement, one forever etched in the memories of Magpie fans.

The Magpies were 40 points clear at that time, but fans were still a little twitchy, worried about a possible comeback.

Jason Blake was looking to clear the ball out of the defensive zone when Didak sensed an opportunity. He smothered the kick then re-gathered the ball before launching a right-foot kick around his body to kick the goal. It went through the middle.

Then he let out a trademark shimmy, knowing the goal had quelled any hope of a Saints’ revival, signalling to the Pies fans.

It was an act of pure genius. For a footballer who loved the clutch moments, he loved having the ball in his hands when his team needed it.

Sure, in hindsight, the Magpies looked to be safe even before this Didak goal, but his sensational goal put a full stop on any fears this game was in danger.

It was vintage Didak, and all the more memorable because he was doing it under sufferance.

Collingwood would go on to win the game by 56 points, the biggest margin of any Magpie Grand Final win.