From road worriers to road warriors

Collingwood, and Mick Malthouse, had a plan at the start of the 2001 season – as a team, they had to learn to win on the road or run the risk of being also-rans for the foreseeable future.

Leading into Malthouse’s second season as coach, the Magpies had lost 16 of their previous 17 games interstate. You didn’t need to be Jock McHale to realise that this trend had to end if the club was ever going to turn its fortunes around and contest for a premiership again.

In a 2001 fixture that included four “road” games – two at Football Park, one at Subiaco and one at Manuka Oval, Canberra – Malthouse explained to his reshaped playing list about the need to become a resilient side no matter where the team played. That first game was ticked off with a win, when the Magpies took and beat Port Adelaide by nine points. It was club’s first win at South Australia’s then home of football since 1996.

The challenge was to back that effort up four rounds later against Adelaide at Football Park in round 12, with a team that had been significantly altered since Malthouse’s first year in 2000, including recycled Magpies James Clement, Brodie Holland, Jarrod Molloy, Shane Wakelin and Carl Steinfort.

Malthouse knew it would time for the team to gel, but interstate trips such as the one to take on the Crows on June 30, 2001, would be part of the glue that would turn this group into a competitive force once more.

“Let’s not kid ourselves,” Malthouse said. “This side today is not as good as the (West Coast) side that won premierships in 1992 and ’94. But we’re taking the steps we need to take to ensure this club has a decent crack at the year. We’re still learning, there’s no question of that … They (the players) believe we are a good football side and it’s taken an enormous time to convince the players we are a good football side.” 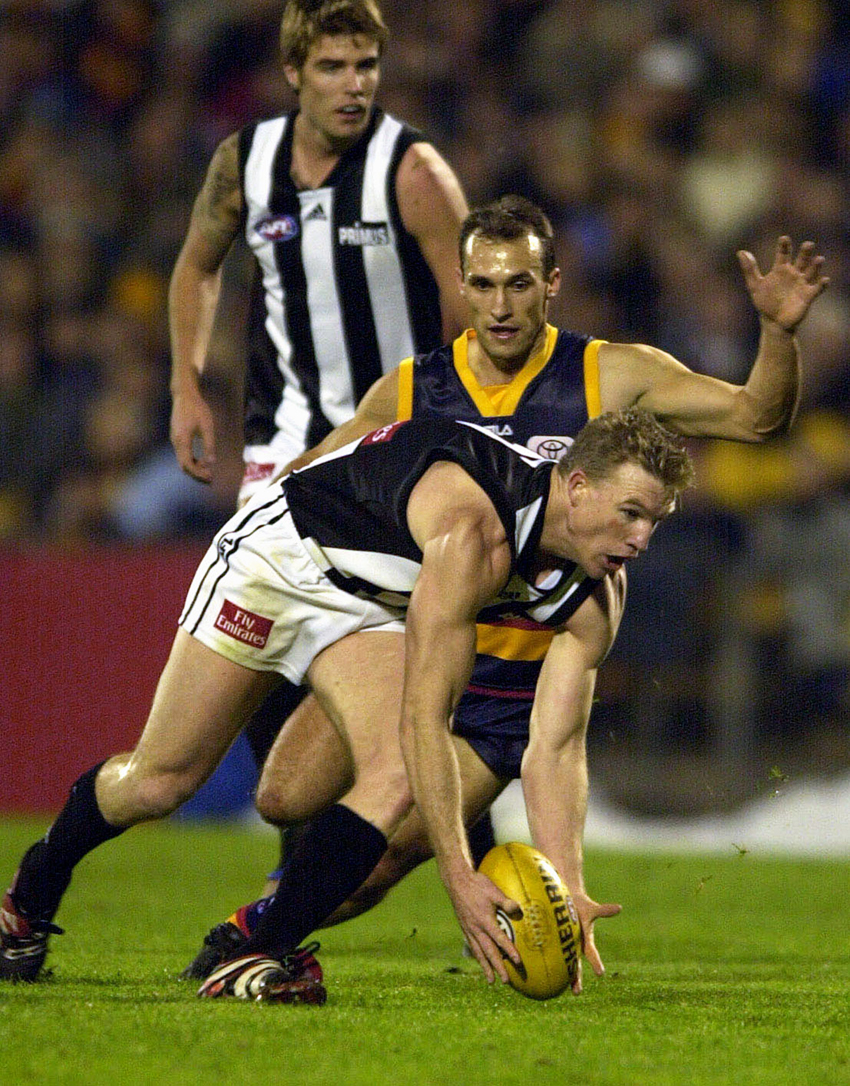 Nathan Buckley gathers in front of Tyson Edwards. Buckley had 37 disposals at Football Park that evening.

Three wins in the first seven games was not the ideal start to the 2001 season, though the losses came at the MCG or Docklands.

By the time Collingwood made its second plane trip to Adelaide for round 13, Malthouse’s Magpies were in the top eight, and Gary Ayres’ Crows were desperately trying to leapfrog them into finals contention again.

Importantly, skipper Nathan Buckley was able to prove his fitness for the game after missing the two previous games with a hamstring issue. He was about to play his 174th game, being one of only three players to have played more than 100 games, with the others being former Kangaroo Glenn Freeborn (103 games), as well as new Magpies in Molloy (133 games) and Wakelin (107).

And tellingly this would prove to be one of the greatest games Buckley would ever play in a Black and White jumper.

Malthouse spoke about the challenge leading into the game: “We did a pretty good job against Port Adelaide. They were in terrific nick and we were able to beat them on their home ground.”

“So the ground now doesn’t become an issue. It’s more the fact we’re playing Adelaide who are 6-6 and breathing down our necks. In the past I think Collingwood has tended to struggle when travelling and I don’t know for what reason. Perhaps because the club didn’t do a lot of travel.”

Collingwood held sway but only narrowly at the first change, leading by seven points. And the Magpies appeared to have control of the game 22 minutes into the second term after Leon Davis slammed home a goal from 50m to open up a 19-point lead.

But Jarman turned on a blistering few minutes, as he was so often capable of doing. He changed the game with three goals in six minutes, while Mark Ricciuto nailed another to put the Crows in front by half-time.

The spectre of Jarman forced Malthouse’s hand after half-time. He had recalled what Jarman had done in the 1997 and 1998 Grand Finals, and knew something had to be done.

He shifted Freeborn off the Crows’ superstar, and conscripted the forward who had been almost best on ground at quarter-time after kicking the first two goals, James Clement. Clement and Holland were new Magpies, but they were already making a difference since moving from Fremantle.

And while Clement had played down back before, his efforts in the second half that day showed what an incredible defender he would turn out to be for Collingwood. 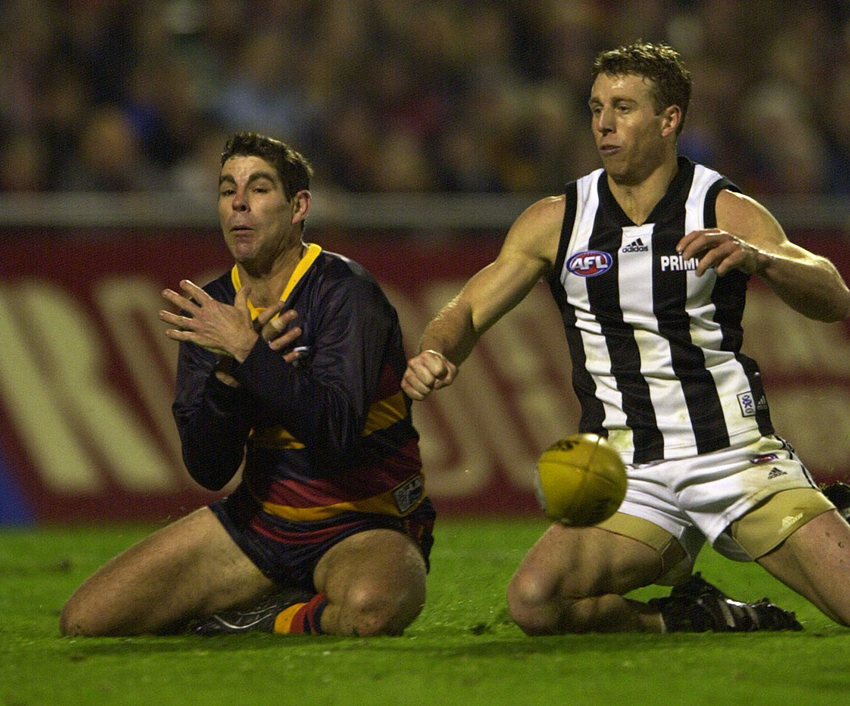 The dangerous Darren Jarman spills a chest mark in front of Glenn Freeborn.

The Sunday Herald Sun said of Clement’s second-half shutdown role on Jarman: “The move worked as Jarman had only one shot, an inaccurate one, at goal in the third period. In the final quarter, when the Crows looked for Jarman on many occasions, Clement shadowed his every move.”

Jarman had six goals to his credit at half-time. He did not kick another one after Clement went to him.

Buckley was having the best of his duel with Simon Goodwin. He was described as “blindingly brilliant”, by Damian Barrett, who was then working with the Sunday Herald Sun. Andrew McLeod had his impact dulled by Paul Licuria, while Malthouse trusted 23-year-old Andrew Dimattina to shadow Ricciuto.

Steven McKee shared the ruck duties with Josh Fraser, though the club’s 1999 No. 1 draft pick spent most of his time in attack, as the Magpies had gone into the game without Anthony Rocca (calf) and Mark Richardson (virus). Chris Tarrant had kicked two early goals but was reasonably well held by Hart.

Buckley’s last term was one for the ages. He would have 37 possessions for the game and win the three Brownlow Medal votes. But it was his desperation mixed in with his poise in the last term that made it so special.

His 13 kicks in the last quarter were all used to great impact. Only six players had more kicks for the whole game than he had in 30 minutes.

The Adelaide Advertiser‘s David Burtenshaw wrote of the Collingwood captain: “If ever any player won a game off his own boot, this was it.”

Malthouse would have hated that analysis, as he was always trying to say that Collingwood’s reliance on Buckley was unhealthy and overstated. But Burtenshaw’s assessment was spot on.

The Pies could never have won this contest without him.

When he kicked Collingwood’s last goal of the game, at the 17-minute-mark – his second for the game – it was to prove the match winner, though the time remaining kept the Crows alive in the game until the final siren.

On four occasions in the last term, the Crows edged to within two points of the Magpies’ lead, but they couldn’t manage to drag themselves over the line.

Fittingly, Clement was tireless in spoiling the ball away from Jarman in the dying stages of the game.

As the time ticked down, Ricciuto had the ball in the back half and saw an opening in giving off to Hart. Then Tarrant desperately laid a tackle to bring about another stoppage.

And a long boot from Goodwin put the ball deep into the Crows’ forward line with only a matter of seconds left. A punch from Betheras was followed by a tap towards the boundary from Clement as the siren sounded. 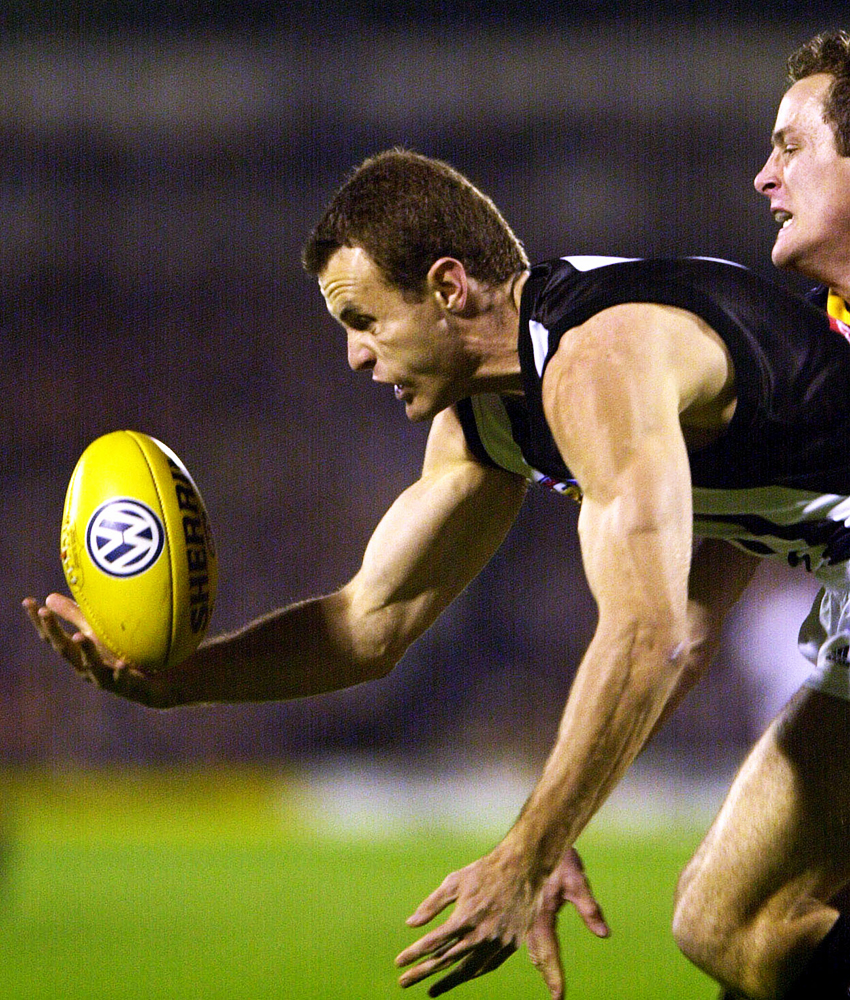 Collingwood had held on. The final margin was two points.

Malthouse could not have been more proud of his team after the game.

He explained: “I don’t think too many (visiting) sides will do that this year (win twice at Football Park). To come away with a victory was more G (guts) and D (determination) than our skill level or setup.”

“It’s very tough and I think mentally we’ve come out of it very well. It’s a great bonus going into future games.

“The record for Collingwood in away games has been pretty dismal over the past six or seven years, maybe eight or nine years.

“We’ve broken a lot of those mental barriers because the players’ persistence puts us on a different level now.”

It would be the same when this team went on the road later in the season, winning games against Fremantle at Subiaco in Round 19, and against the Kangaroos in Canberra in the final round.

In many ways, that 2001 season, although it ended without a finals berth, produced a template for the coming seasons. By the end of the next season many of these young Magpies were playing off for the premiership, and they did so as one of the most resilient teams on the road.