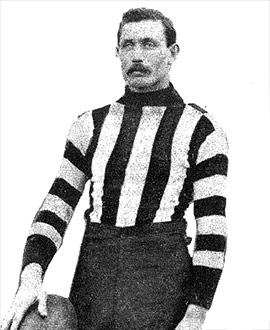 Collingwood’s early experiences with playing coaches were not overwhelmingly successful.

Dick Condon started well in 1905, but his team fell in the finals and then imploded in spectacular fashion in 1906 amidst claims of internal bickering and strife. His successor, Ted Rowell, was more stable, but could manage no better than fourth and handed in his clipboard midway through his second season when it all got too much.

Angus had been a latecomer to VFL football, not starting his career until he was 27, before which time he’d played in the country and served in the Boer War. By 1909 he was 34, had plenty of experience, and had won the respect of his teammates for his tough and unflinching work in the role of follower, and the consistency of his performances. He was named vice-captain that year, as well as coach, with Bob Nash as captain.

After another frustrating season in 1909 (again in the finals but again knocked out in the first week), the club temporarily abandoned its practice of having separate captains and coaches, making George the club’s first captain-coach. It proved to be a masterstroke.

Angus was an excellent reader of the play, something which stood him in good stead both as captain and coach. An observer once likened him to a champion draughts player – “always seeing a few moves ahead”. He was also renowned for his coolness under pressure, and his ability to “direct his team with excellent judgement.”

In 1909 and again in 1910 he inspired his team by playing through considerable pain, a broken rib in 1910 and a finger badly damaged after being caught in a machine at work in 1909. He performed brilliantly on the field in the 1910 season, and especially in the wild Grand Final win. His generalship that day was also superb.

Although quietly spoken, Angus was never afraid to give out instructions to his teammates. Such was the respect in which he was held, they were almost always followed. He was extremely team-oriented, and indeed as he was being carried from the field in 1911 with what turned out to be a career-ending ankle injury, the Argus reported that he was still issuing instructions to his players.

That was George Angus to a tee: selfless, team-oriented, courageous and committed. And he’s one of only five men who can claim the title of Collingwood Premiership Coach.