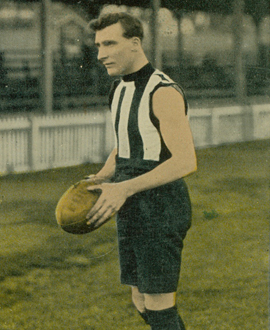 Dick Lee was a goalkicking legend of his day.

From its very earliest days, Collingwood has been blessed with some of the game’s greatest ever goalkickers.

Archie Smith, who played in the club’s first game, was a star of the early years, notching seven club titles and twice winning the VFL’s goalkicking award.

But that was just the start. Dick Lee was the game’s first goalscoring superstar, and he was followed seamlessly by Gordon Coventry, who held the League’s goalscoring record for more than 60 years. And he, in turn, was followed by Ron Todd, who might have been the best of them all had he not gone to the VFA. Then in later years, Peter McKenna, Peter Daicos, Brian Taylor and Sav Rocca all made their mark as prolific forwards.

It’s a rich heritage, and one we as a club are only too happy to celebrate with the following collection of records.