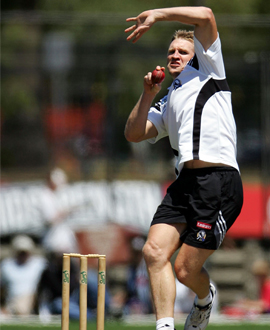 Nathan Buckley in action during the 20/20 Tsunami cricket match between Melbourne and Collingwood at Junction Oval on January 30, 2005.

The Collingwood Cricket Club was formed on 18 June, 1906, and played its home matches at Victoria Park from 1906 until 1996, when it merged with the Camberwell Cricket Club to form the Camberwell Magpies. The club won four senior Victorian premierships.

According to Richard Stremski’s Kill for Collingwood (1986), William Beazley, president of the Football Club, took up the same role at the helm of the Cricket Club.

“The Football Club granted a major concession to the Cricket Club to facilitate its birth,” Stremski wrote.

“For his annual subscription of one guinea, each cricket club member received one adult and two ladies tickets; these tickets admitted bearers to Collingwood football matches as well” (Stremski, 1986, p. 51).

Collingwood Cricket Club’s most famed product was John (Jack) Ryder, who was born and raised in Collingwood and played for the club between 1906 and 1930. He represented Victoria on 177 occasions, and averaged 51.62 with the bat across 20 Tests for Australia.

He was dubbed the ‘King of Collingwood’, and as such the oldest stand at Victoria Park is named in his honour – the Jack Ryder Stand. The Ryder Medal, awarded to the best district cricketer in Victorian Premier Cricket each summer, is also named after Jack.

Another famous name to traverse the Collingwood Football and Cricket Clubs is Doug Gott. The defender played 97 games for the Football Club between 1969 and 1977, and played cricket for Collingwood from 1968/1969 to 1987/1988.

He was a member of the drawn VFL Grand Final team in 1977, and played in the Collingwood Cricket Club’s premierships in 1970/1971 and 1974/1975. A fast bowler, Gott also played four First Class matches for Victoria.

Although the Collingwood Cricket Club merged with Camberwell in 1996 and left Victoria Park in the same year, that isn’t where the connection between the Football Club and the cricket world ends.

In January 2005, Collingwood and Melbourne joined forces to raise $50,000 thanks to a charity cricket match at the Junction Oval in memory of Demons defender Troy Broadbridge, who was killed in the 2004 Boxing Day Tsunami.

Players such as Nathan Buckley, Shane Wakelin, Shane Woewodin and Rhyce Shaw wore their cricket whites as Collingwood (138) defeated Melbourne (135) by three runs. Anthony Rocca picked up a wicket with his first ball, before snaring the wicket of former Australian batsman Dean Jones, who was playing for the Demons.

Reference
Information used to compile this article was sourced from “Kill for Collingwood” (1986) by Richard Stremski.