The last time the Magpies and the Bulldogs met during an Olympics the teams fought out a thrilling finish made famous by Terry Wallace’s comments in a documentary that he would “spew up” if he heard any players receiving a pat on the back after just failing to run down Collingwood.

That was back in 1996, and the Atlanta Olympics – the Games that Melbourne thought it was robbed of – captured the attention of the world. A week and a bit earlier, Muhammad Ali had produced one of the most memorable moments in Olympic history when he famously lit the cauldron, and just a day earlier Australian swimmer Kieren Perkins dragged himself off the canvas to claim back-to-back 1500m freestyle gold medals in spectacular fashion.

As much as Melburnians were still hurting at missing out on hosting the Olympics 40 years on from the 1956 ‘Friendly Games’, they were still transfixed with what was happening on the other side of the world.

Perhaps that’s why only 28,776 fans turned up to the MCG to see Collingwood take on Footscray, as the Western Bulldogs were then called. Perhaps that sparse crowd had more to do with the fact that the Pies were in 11th place and the Bulldogs were 15th.

Both sides had struggled big time in what was the AFL’s Centenary Season. The Magpies, under first-year coach Tony Shaw, started the year with four wins from the first six games, but a string of eight consecutive losses put a massive dent in the season. It was worse for the Bulldogs. Allan Joyce had been sacked as coach after only two wins in the first half of the season, leaving Wallace as caretaker coach.

Wallace had been given the rest of the season to prove himself, starting off with two losses, then scoring a win against Fremantle and a loss against the Brisbane Bears. The clash with Collingwood loomed as an important chance to push his case further, and an opportunity for his team to chase what would have been its fourth win of an otherwise depressing season.

Making the Dogs’ season even more interesting was the fact that a documentary was being made about the club, filmed by director Michael Cordell, and given the happenings, there was little doubt it would make interesting viewing.

On the eve of this clash, Wallace gave an interview to the Sunday Herald Sun – to a much younger version of the writer of this story – and detailed his belief that his young side was on the verge of going places.

“Obviously, we have had a disappointing season. That’s probably the understatement of the year,” Wallace told me. “We had won two in 12 when I took over and we have now won one in four in my time.

“But the important thing is I’m trying to teach the players to play to my style of coaching.

“We have targeted the next month to have a real go against sides that are in the lower part of the draw. We’ve got Collingwood, Fitzroy, Hawthorn and St Kilda. This is very, very important for us.”

It was important for Shaw, too. A big win would at least keep the club’s flickering finals hopes alive.

Some of the players that day still resonate in today’s football, Nathan Buckley, who set up Collingwood’s play from half back early in the game, is the club’s coach, while then Bulldog Leon Cameron is coach of Greater Western Sydney.

Scott Burns is now a Magpies’ assistant coach, while Rohan Smith is the same at the Bulldogs, and Chris Grant is now back at the Whitten Oval as the club’s director of football.

It was Shaw’s 17th game as senior coach, just six days after his 36th birthday, and only Wallace’s fifth.

Shaw’s team kicked 8.3 to the Dogs’ 1.1 in a near perfect opening quarter with fears that this could blow out to be a very one-sided encounter.

Wallace would say later: “The first quarter was a coach’s worst nightmare, I suppose.” He would be even more cutting in the documentary, which did not air until the following season, telling his players: “We were a rabble in that first quarter, (it was) absolutely bloody disgraceful.”

Buckley kicked the first goal of the game, a towering punt from almost 60m out, and it had set the scene for a blistering quarter of football.

Incredibly, the Magpies led by 45 points before the Bulldogs kicked their first score – a behind. And instead of key forward Saverio Rocca doing the damage (he was relatively well held by Tony Campbell), it was left to 23-year-old Pitt. The young forward would kick three of those eight opening term goals and end with four for the match – his equal best return in a game.

Pitt, recruited from Norwood, had been given an ultimatum from his coach leading into the game – convert his chances in front of goal or run the risk of going back to the reserves.

He told the Herald Sun later: “When I first started I had a few shots at goals and missed a few goals, so `Shawy’ said to me `start kicking those goals and you stay in the side.”

“I’d been down on my confidence, I wasn’t kicking well and when I came back up (from the reserves) I was told: `This is it. Do it now or lose it forever’. ”

Fortunately, he took his chance on this day. 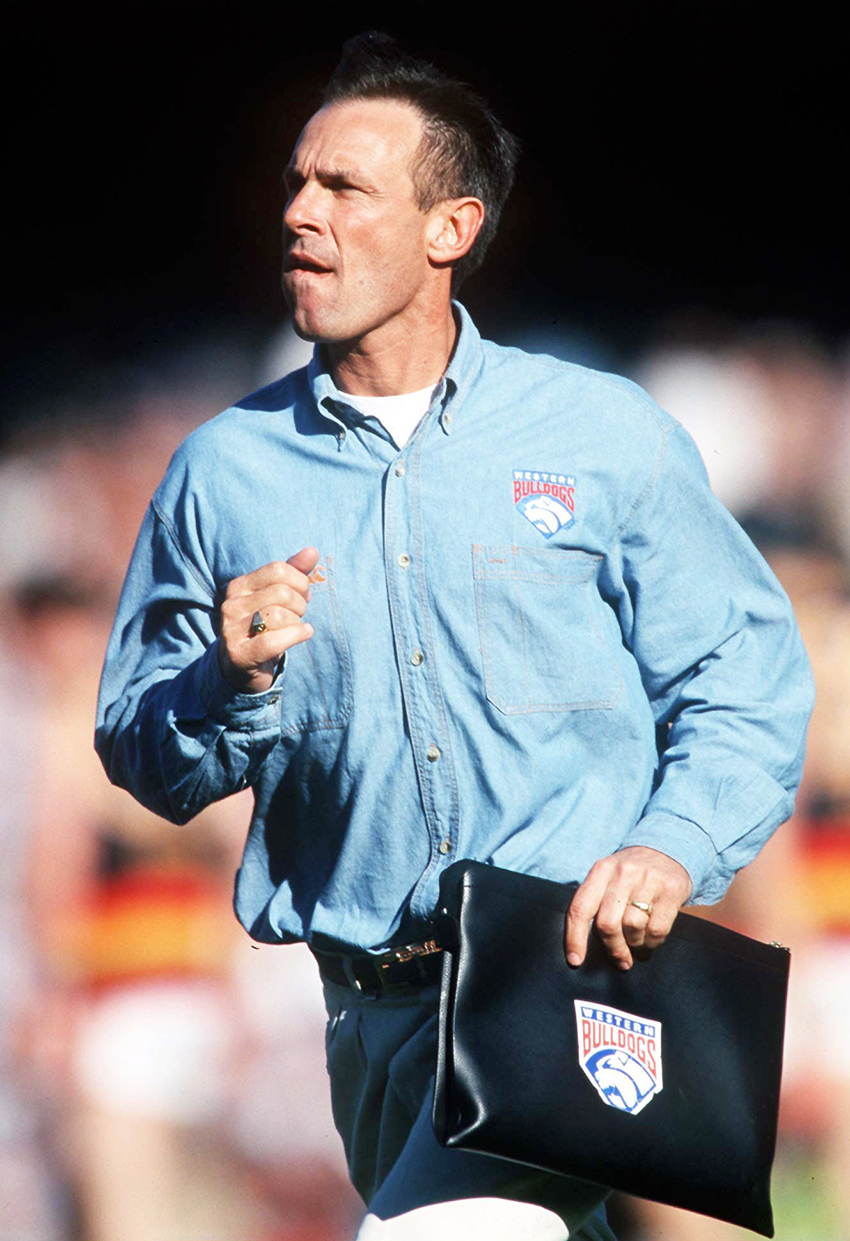 The margin at quarter-time was 44 points. The Collingwood faithful was delighted, but more than a few did a double-take at the margin, knowing it had a strangely ominous ring to it.

Michael Horan, of the Herald Sun, who happened to be a Black and White fan with a long memory, explained: “Someone joked at quarter time that the Magpies had blown a 44-point (half-time) lead before, alluding to the famous 1970 Grand Final and the Carlton comeback which has long since passed into folklore.” Surely, this one wasn’t going to be the same.

But Footscray did outplay the Magpies in the second term. Wallace’s team kicked 6.3 to 4.1, and the difference at half-time had been reduced to 30 points.

Still, it was a significant margin, though the Dogs were rallying.

However, they could not make any further scoreboard inroads during the third term. Each team kicked three goals, and when the three-quarter-time siren sounded, the Magpies still maintained a 29-point lead.

The game, according to the Herald Sun, “appeared to be as good as over”, even though the Bulldogs had controlled much of the general play during the second and third terms.

Brad Johnson, an important player in the Dogs’ revival, marked and goaled four minutes into the last quarter. The difference was back to 22 points,

Then Luke Darcy twice had the chance to cut it back further. But he sprayed a ball out on the full from 10 metres out, and missed again from close in not long after.

Ahmat nailed an important goal for the Magpies from 50m out, which seemed to settle the issue. After all, neither side advanced much on that almost five goal margin until around six minutes was left to play.

A long bomb torpedo from well outside 50m from Daniel Hargraves appeared to spark the Bulldogs into action. Then Johnson nailed another on the run. And just as Dogs fans were considering heading towards the exit, Jason Watts kicked yet another.

The difference was disappearing at a rate of knots and another goal to young Bulldog and future Pie Tyson Lane brought Wallace’s team to within reach of a remarkable victory or, the very least, a draw.

All four late Bulldog goals had come within four minutes. There was still 51 seconds left on the clock.

And with Jose Romero steaming in to the forward line, it seemed as if another major was in the offing. But, out of nowhere, Paul Williams launched a running tackle at full stretch on Romero and dragged him down. The momentum went down with Romero.

It was inspiring stuff and precisely what Collingwood needed at that moment. The siren followed soon after, with Collingwood still clinging to a six-point lead. The Bulldogs had quite simply run out of time.

Wallace slammed his hand on the old MCG coaches’ box open window. He knew his team had missed an important chance, and was determined to let them know. “Let’s get out there; I’m going to get right into them,” he told his support team as they headed to the rooms.

And in the other coaches’ box, Tony Shaw was just as frustrated, albeit with a touch of relief.

“That’s just unacceptable, the players know that,” Shaw said after the game. “We’ve got to do better than that. In the last four or five minutes it was a disgrace how easily they (Footscray) got the ball out of the centre.

“We have this in-bred thing, which is unacceptable, that we can’t bury sides.

“We allowed the pressure to let up, we fiddled with the ball and we were over-cocky with the ball. We’re not good enough to do that. ”

Wallace’s reaction and his message to his players – on Cordell’s documentary – became a part of football folklore.

Behind closed doors, he spoke passionately about the lost opportunity, and how his team had to stand for something better than what they had served up in the first quarter. Never mind the huge leap they had taken, it was a case of what might have been.

“I don’t know about you blokes, but I can’t bear losing a game like that,” he said. “Look, fantastic effort, but what does a fantastic effort mean. We don’t get diddly squat.”

Then he uttered the words remembered for as long as this game will be – “If I see one bloke walk out of here and getting a pat on the back from people out there for a good effort, I’ll spew up.”

The Dogs would win the following week, spurred on by Wallace’s words. His caretaker role would become a permanent one.

In fact, the Western Bulldogs – as they would become known later in the year – would make the 1997 and 1998 preliminary finals, coming agonisingly close to a Grand Final berth.

Collingwood would drop the next three games after that Round 17, 1996 game, which cost the club any chance of playing finals that season. Sadly, there would be no more appearances in the finals for the rest of a decade that had started out so successfully.