In Black and White Magazine 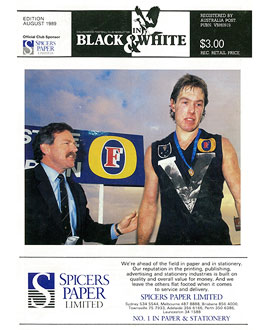 Collingwood’s In Black and White magazine has been a regular staple of the Magpie experience for over 50 years.

The newsletter has been published every year since, in different formats and occasionally with different names. It has moved from a very basic four or eight-page newsletter to the high quality, full colour, glossy publication we see today.

The frequency of publication has also changed significantly over the years. Since 2013, comprehensive pre-season and post-season yearbook editions have been published each year.

History buffs might be interested to learn that there had been an earlier attempt at creating a club newsletter, with the production of a small magazine called The Collingwood Footballer in July of 1955. But it ceased production after just its second edition, in April 1956.

An evolution of Collingwood’s In Black and White magazine 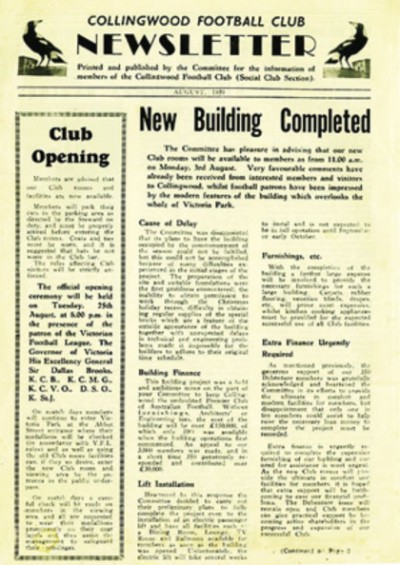 August 1959: The earliest Collingwood newsletter in the club’s possession. 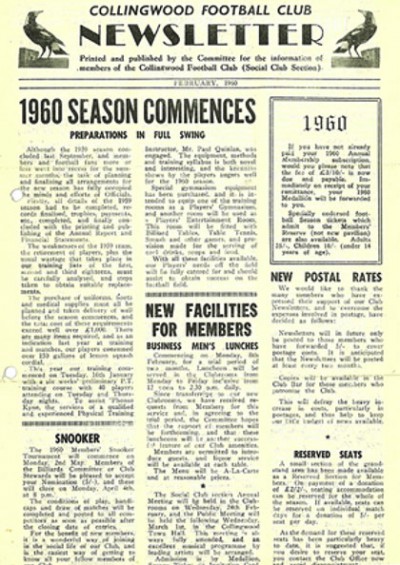 February 1960: Titled the Collingwood Football Club Newsletter, it is an A4-sized newsletter, four pages long and is printed in standard paper in black and white. It provides general information to the club’s members about the season to follow, pays tribute to retired players and also flags some up coming social events for members, such as the Members’ Snooker Tournament. 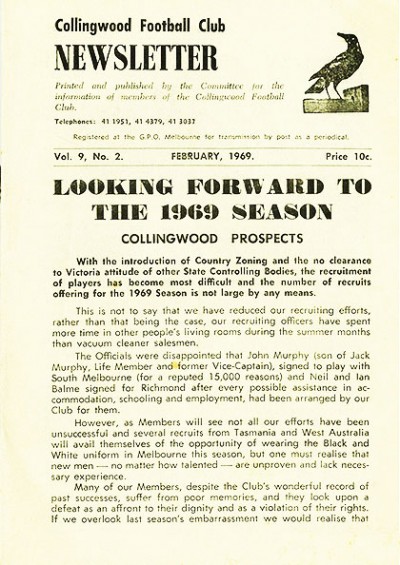 February 1969 (Vol. 9, No. 2, Price: 10c): At the beginning of 1969, the Collingwood Football Club Newsletter changed format, from the A4 size to a smaller A5 booklet. A similar design was maintained with a basic black and white print on regular paper. The newsletter’s content also remained similar with general information about the previous and upcoming season, news about member events as well as a handful of advertisements. 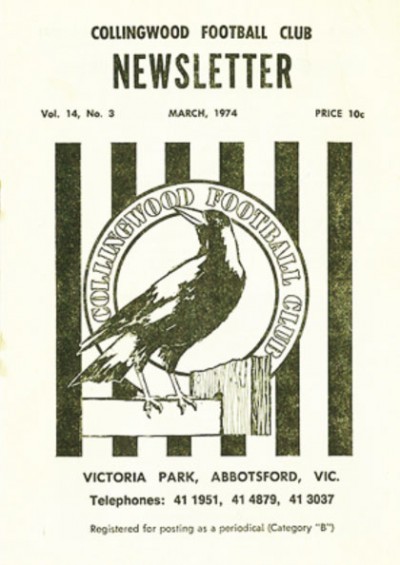 March 1974 (Vol. 14, No. 3, Price: 10c): While the Newsletter remained similar from 1969 through to the mid 1970s, in 1974, the front cover took on a different design, with the usual opening story replaced by a Magpie logo that took up the entire cover. Content of the newsletter remained much the same with the addition of photographs, where previous editions were largely made up of written content with the occasional cartoon. 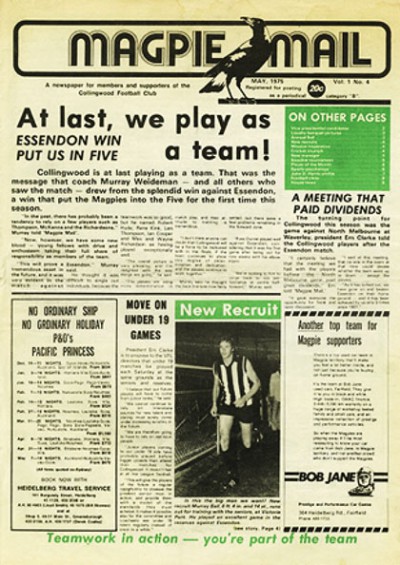 May 1975 (Vol. 1, No. 4, Price: 20c): In May of 1975, the Collingwood Football Club Newsletter became Magpie Mail and then went from the pocket size A5 to more of a broadsheet A3 size. With this came the addition of green print, rather than just black and white. This edition included more photographs and advertisements, breaking up the club stories, and was eight pages long. 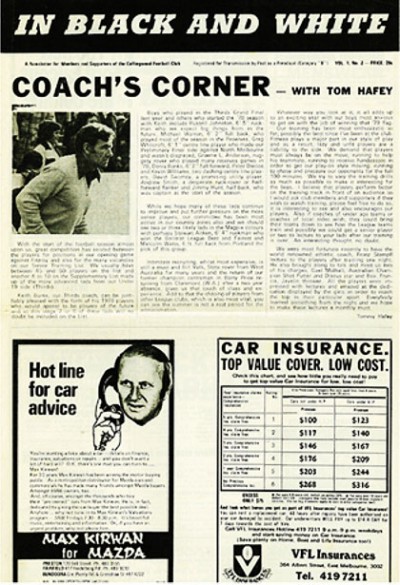 May 1979 (Vol. 1, No. 2, Price: 20c): In 1979, the newsletter reverted back to black and white while maintaining the larger A3 size. The title changed again, this time to In Black and White, which remains to this day. Content remained similar, covering topics like general club updates, player profiles and advertising social events for members such as lawn bowls and snooker. 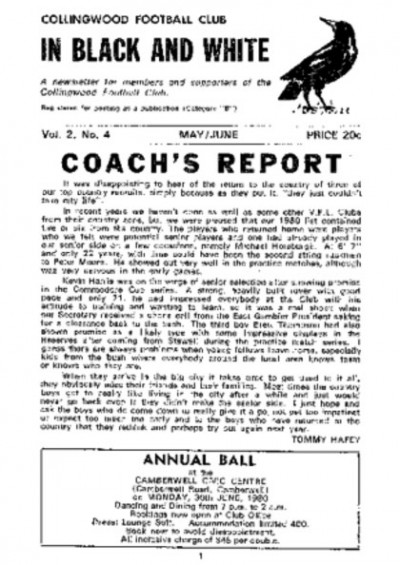 May/June 1980 (Vol. 2, No. 4, Price: 20c): In 1980, there was a return back to the smaller A5 layout printed in black and white. The content, however, remained the same, with columns such as the coach’s report featuring throughout most of the newsletters to date. 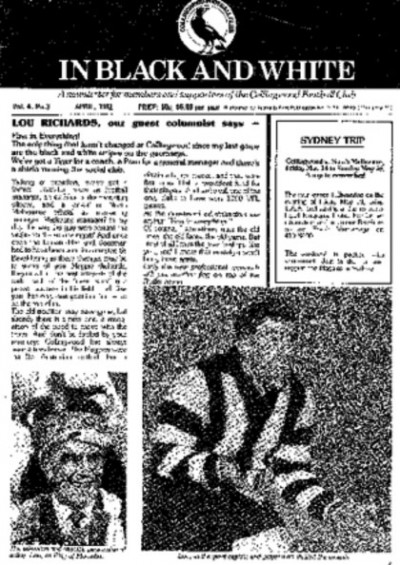 April 1982 (Vol. 4, No. 3, Price: 50c ($6.00 per year): In 1982, the magazine returned to its original A4 size, this time on glossy paper. The cover design changed with this shift, featuring a slightly different header, though the name remained the same. This publication also introduced a centrefold image collage. The feature of the collage for this edition was photos from the pre-season training. 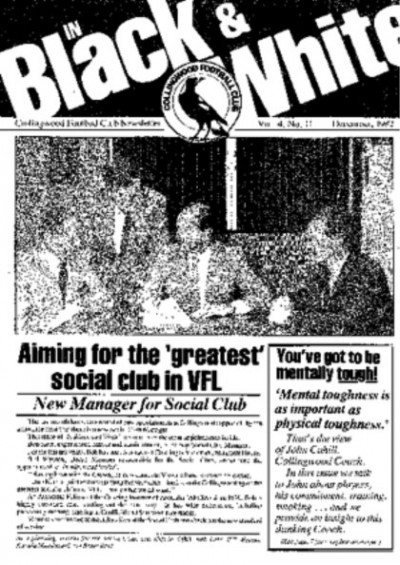 December 1982 (Vol. 4, No. 11): By the end of 1982, the cover design of In Black and White had changed again. The glossy black and white A4 newsletter now had a bolder title and a lot more content spanning over 16 pages.

November 1983 (Vol. 5, No. 11): The 1980s witnessed yet another change in the design of In Black and White, this time trialling colour photographs for the front page. This appeared to be a one off, though, with the publication printing only in black and white for the next few years. 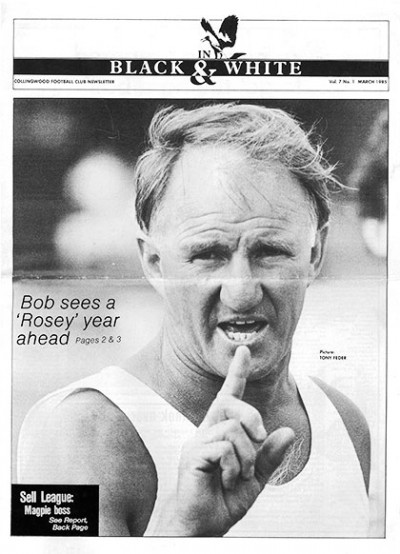 November 1985 (Vol. 7, No. 1): In 1985, the design changed again, returning to its A3 size. This edition very much resembled a newspaper layout, containing in-depth stories about players past and present with accompanying photographs .There was a also a page dedicated to ‘Members say” where comments from a number of supporters were featured. 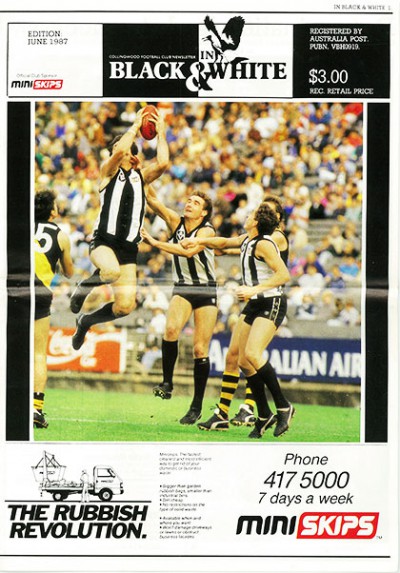 November 1987 (Price: $3.00): The June 1987 edition marked the change to colour printing for good for the cover of In Black and White. While still the A3 glossy, this 1987 edition contained even more content than previous newsletters, reaching 20 pages in length. Some new features in the version included a centrefold colour poster of an individual player, photos from member events and a list of statistics from individual games. 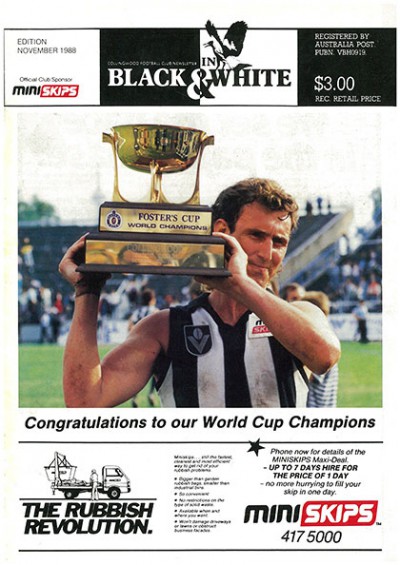 November 1988 (Price: $3.00): This edition maintained a similar design to the 1987 editions, but it returned to the A4 size – the size In Black and White has remained at ever since. Much of the content included inside remained similar to that seen in 1987, including the centrefold colour image, coaches report and player profiles as well as general club and member news. 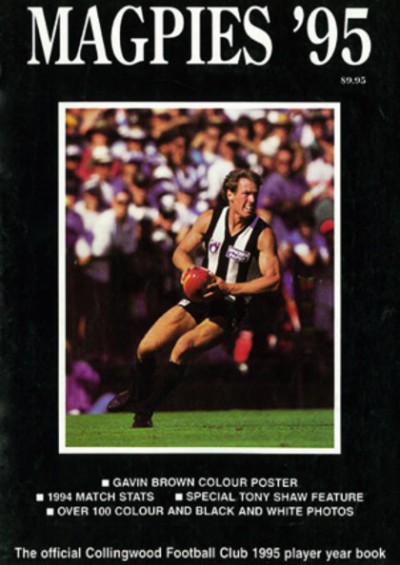 Magpies 1995 Player Year Book (Price: $9.95): For several years during the 1980s and 1990s, the club published a player yearbook, containing profiles, photos and statistics for all players on the list that season. 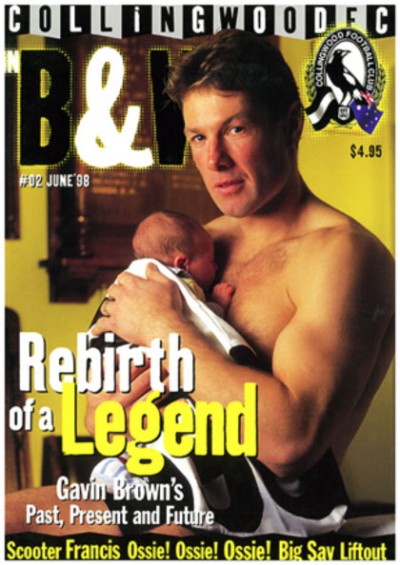 June 1998 (No. 2, Price: $4.95): In Black and White underwent a dramatic change in its design, layout and content in 1998. It now resembled a glossy magazine, being printed entirely in colour, and took on a much more elaborate graphically designed format. This edition contained several photographs, comprehensive written features as well as an ‘I Was There When’ section looking back at a historical moment in the club’s history. 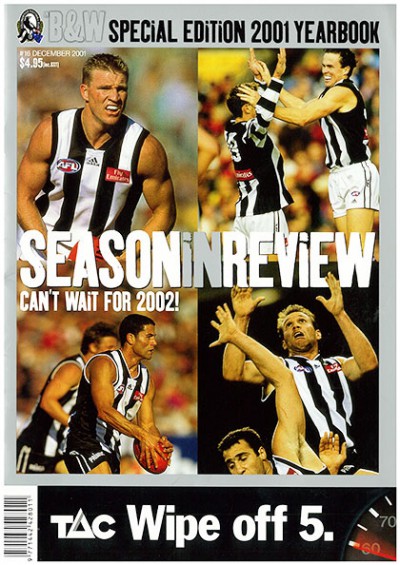 December 2001 (No. 16, Price: $4.95): The special edition 2001 yearbook took on a similar format to the 1995 Player Yearbook. It contained in-depth player interviews as well as an overview of the season that was. 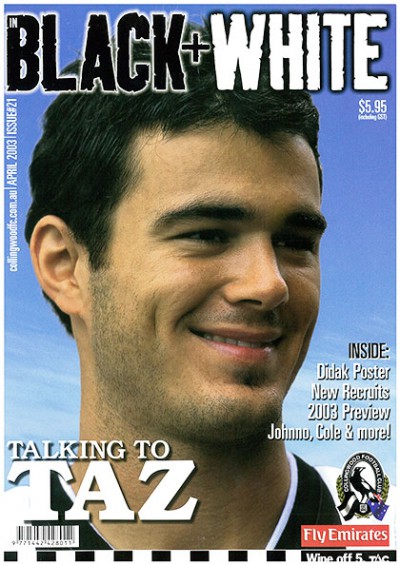 April 2003 (No. 21, Price: $5.95): Throughout the first decade of the 21st Century, the layout, content and design of In Black and White remained much the same. The April 2003 edition reverted back to a more basic front cover design, though, and the publication’s title design changed slightly. 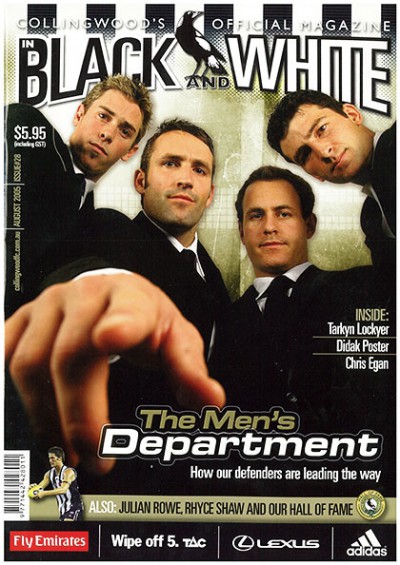 August 2005 (No. 28, Price: $5.95): The edition of August 2005 illustrates the slight change in the design of the publication title. Much like previous editions, there is a centrefold poster image of a player, features on certain players that are accompanied by an in-depth article as well as a historical feature, titled ‘honouring the greats’. 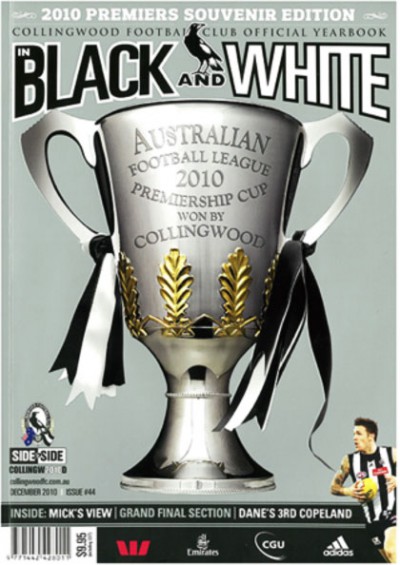 December 2010 (No. 44, Price: $9.95): The 2010 In Black and White yearbook was a special souvenir edition dedicated to Collingwood’s 15th premiership. It provided an overview of the season, with round by round statistics and game descriptions. Also included were profiles of each player and their season as well as photos and written features following the Grand Final win over St Kilda. 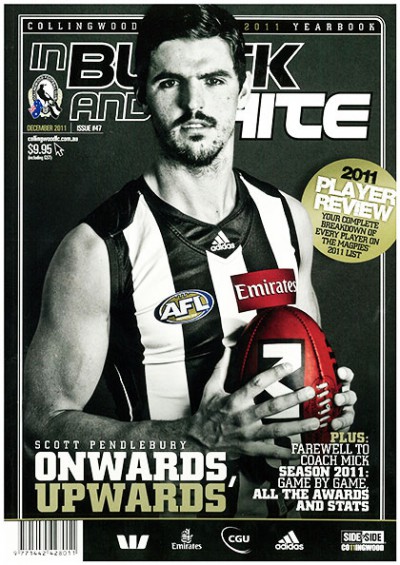 December 2011 (No. 47, Price: $9.95): During season 2011, Black and White underwent a slight change in its design. The content of the 2011 yearbook edition saw a shift towards a lot more visual content, compared with previous publications. As had become the norm with yearbook editions, there was a large focus on player reviews and again an inclusion of game-by-game overviews and statistics from the season just past.