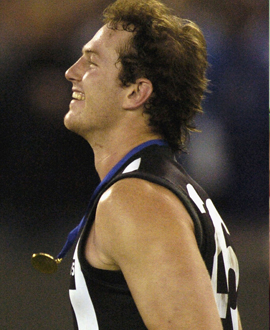 Ben Johnson runs off the ground after receiving the Jason McCartney Medal in 2004.

From 2003 to 2009, the Jason McCartney Medal had been presented to the player voted the most courageous performer during matches between Collingwood and North Melbourne.

Between seasons 2010 to 2012, no medal was awarded after any of the matches between the two clubs.