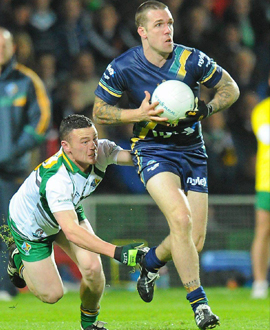 Dane Swan of Australia in action against Leighton Glynn of Ireland during the Irish Daily Mail International Rules Series 1st Test between Ireland and Australia at the Gaelic Grounds, Limerick in 2010.

The Jim Stynes Medal is awarded to Australia’s best player in the International Rules Series.

It honours the former champion Melbourne ruckman who came to Australia from Ireland in 1984 and went on to become one of the greats of the game, winning the 1991 Brownlow Medal and playing an AFL record 244 consecutive games.

Jim Stynes was a regular participant in the International Rules Series.

In 2010, the side had a strong Collingwood representation coached by Michael Malthouse and featuring Dane Swan and Tyson Goldsack.