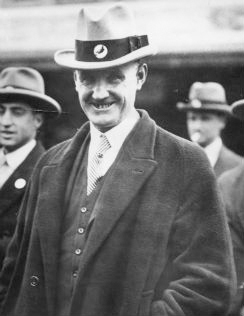 The Jock McHale Medal is presented to the premiership coach each season.

The medal honours legendary Collingwood coach James “Jock” McHale, who guided the Magpies in an astonishing 714 matches, for 467 wins, 237 losses and 10 draws.

McHale’s Collingwood teams won eight premierships, including a never-equalled four in a row between 1927 and 1930 inclusive.

Formerly known as the Premiership coach’s medal, the medal was renamed in McHale’s honour in 1949, immediately after his retirement as a coach.

It was first awarded in 2001, and medals were retrospectively awarded to back to 1950 (the first season following McHale’s retirement from coaching).