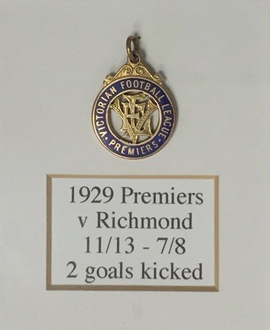 The four Premiership medals won by ruckman/forward Bob Makeham in the famous Machine team triumphs of 1927-30 have been donated back to the club.

The four medals, together with Makeham’s Collingwood Life Membership medallions, were given to the club by Bob’s descendants. Bob’s great nephew, Paul Makeham, said: “We’re proud of Bob and everything he achieved at Collingwood. And we’re thrilled that his Premiership medals are now back at the club where they belong, so everyone can enjoy them and remember him as the great player he was.”

Collingwood’s History and Archives Manager, Michael Roberts, said it was an extremely rare collection of medals.

“Only 12 players took part in all of the legendary four-in-a-row Premierships, so it’s an amazing opportunity to get all four belonging to the one player,” he said.

“We can’t thank the Makeham family enough for this wonderful donation. The medals will be a prized part of our collection.”

Bob Makeham snaps a goal during the 1928 second semi-final against Melbourne.

Makeham was one of the unsung heroes of the Machine team era. Although not enjoying the profile of players like the Coventrys and Colliers, he was a vital cog and ever-present member of the line-up.

He missed only two games across the four years (other than when he was playing for Victoria), was among the best players in 1927 and just about best-on-ground in 1930’s miraculous come-from-behind victory. He also played in the losing grand finals of 1925 and 1926.

If you have any items you’d like to donate to the Collingwood Archives, email archives@collingwoodfc.com.au or phone 03 9415 9250