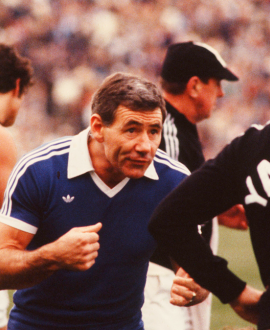 We're looking for souvenirs and other items from the Hafey years (1977-82) for our main display at the club this year. Can you help?

Hi Magpie history fans – and welcome to the first of our occasional email newsletters focusing on the historical side of the Collingwood Football Club. We hope you find it interesting.

This is our first Magpie Faithful newsletter, so feel free to get involved and give us your feedback. We’re also looking to expand the group as far as possible, so if you know of anyone else who might want to be a part of it, please direct them here.

Archives volunteers wanted
From time to time, we need extra volunteer help at the Collingwood Archives, in areas including:

If this is something that interests you, then let us know at archives@collingwoodfc.com.au Engagement will depend partly on our workflow, and also on (a) your availability, and (b) your skill set. But register your interest and we’ll take it from there.

Hafey’s Heroes Function
This year’s Forever function will be focused on Hafey’s Heroes – those brave and unlucky teams, coached by Tom Hafey, that represented the Pies with such distinction between 1977 and 1981. We’re likely aiming for around mid-July again, so keep an eye out for more details closer to the time.

The Hafey’s Heroes display in the foyer is now up and will remain open through the rest of 2019. If you have any memorabilia from that era – souvenirs, guernseys, supporter gear, duffle coats, anything! – that you’d like to loan us for the display, please contact me ASAP at forever@collingwoodfc.com.au

Five Round 1 oddities (thanks to Steve Rodgers)

We were fortunate to have been gifted some wonderful items at the club last year, chief among them Marcus Whelan’s 1936 Premiership medal, his Life Membership medallion and a silver coffee pot given to him by the club on the occasion of his wedding in 1939. The items were donated by one of his grandsons, Daniel Whelan.

But there have been numerous other generous donations too. The daughter of Magpie ANZAC Ted Prendergast gave us a battered old silver cigarette case that had been struck by bullets in France in 1917, probably saving Ted’s life. Magpie 1958 Premiership hero Brian Beers gifted a very special WEG poster that had been signed and noted by Ron Barassi. And Peggy Boyd presented us with a signed menu from the 1930 Premiership dinner, as well as two rare brooches from the period.

The Forever website
If you haven’t seen it yet, our history website Forever (https://forever.collingwoodfc.com.au) is well worth a look. There’s lots of great reading there on past players, matches, stats and the like. It’s still a work in progress, but check it out.

Spread the word
We want more people to sign up to this group. So please, if you know anyonewith an interest in Magpie history, send them this link and get them to join:
https://forever.collingwoodfc.com.au/join-the-black-white-club/

Feedback
If there’s anything you’d like to see more/less of in these newsletters, just let me know at forever@collingwoodfc.com.au.