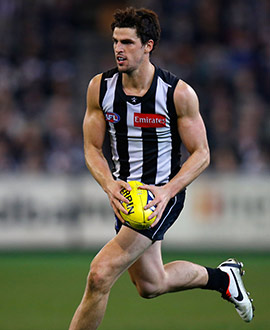 Hello again Magpie Faithful members – and welcome to our end-of-year review, where we try to keep you updated with everything going on in the world of Magpie history.

It was obviously a disappointing end to the season, but at least we managed to show that the meteoric rise of 2018 was no fluke. We just have to find a way to go two steps better now in 2020.

Remember to stay in touch with us via forever@collingwoodfc.com.au and also keep spreading the word, by encouraging your friends and Magpie mates to join our little group here.

Have a great Xmas, and see you in the new year – when we have some very exciting things in the pipeline!

From a historical perspective, the biggest event of 2019 was our skipper becoming just the third player in Collingwood history to play 300 games with the club. He finished the year on 301 games, with a career tally of disposals just under 8000 – the ninth highest tally of all time. Obviously he’ll need to stay fit and healthy but, if he does, then any number of other records could fall his way in the years ahead. Next cab off the rank will be the club’s games record of 313, currently held by Tony Shaw, that could fall next year. Fingers crossed he gets there – we love seeing new marks being set!

Next year we’ll be celebrating the 10thanniversary of our 2010 Premiership – and we’ll be marking the occasion with a special display in the foyer. So if you have any interesting or unusual mementoes from that year that you’d be willing to loan us for all of 2020, please get in touch with us at forever@collingwoodfc.com.au

We were able to add another display cabinet to the foyer area late in the year, celebrating all those teams that have been ‘connected’ to Collingwood over the years, from Collingwood Juniors and the reserves and under-19s through to the current day women’s football and netball teams. The short-lived Collingwood Warriors soccer club even cracks it for inclusion! Have a look next time you’re at the Holden Centre.

Big thanks to Club 42, who donated this “Collingwood Family’ cabinet.

If you’d like to support the Archives’ work by donating a cabinet, please contact me at forever@collingwoodfc.com.au

Thanks to all those who turned out in July for a great night celebrating the Hafey’s Heroes years. Rick Barham, Kevin Morris, Ray Byrne and Peter McCormack were on-stage guests and had us all in fits of laughter with their memories of that crazy era. Special thanks to Maureen Hafey, who made a brief appearance on stage and wowed everyone. The Hafey’s Heroes display will remain in the foyer until the end of the year.

While Murray Swinton’s scrapbooks, which we highlighted in our last newsletter, were the largest of the donations we received this year, we were also gifted many other wonderful items. And we’d like to thank the following, who all generously gave items to become part of the club’s collection: Di Lemmon (some wonderful old player postcards from the 1960s!), Julie Watkins (scrapbooks and a 1950s cup, saucer and plate), Ronald Kite (a 1977 Grand Final cardigan), Danny McGoldrick (Yakka tracksuit top), Michael Mackey (Yakka training top), Diana Johnstone (cheer squad and general memorabilia), Melissa and Alan Miller (bottles of port), Ray McQuillen (magazines), Jo Luciani  (a wonderful polystyrene boater hat from the 60s!), Jan Truscott (a Darren Millane guernsey from 1988) and Margaret & Peter Clasohm (Peter Daicos testimonial print). And a special thank you to the legendary Joffa, who donated the first and most famous of his gold jackets – the one that started the whole tradition. Thanks Joffa!

Thanks to all our donors. If you have anything you’d like to add to the club’s collection, just contact us at archives@collingwoodfc.com.au

There are times when we need extra volunteer help at the Collingwood Archives – with things like the physical movement of items, general record-keeping, or research. We also need people with IT/web/computer/podcasting expertise. If any of that interests you, then let us know at archives@collingwoodfc.com.au