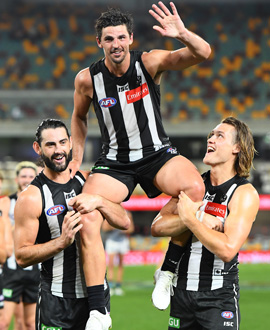 Scott Pendlebury is chaired off after game #314

Well, what a strange old season that was. We’ve never seen its like before, and hopefully never will again. Covid-19 has hit the club’s operations hard, so we weren’t able to produce our usual updates during the year, but we’re back again now with our end-of-year review. Hope you enjoy it.

We hope you’ve all managed to stay safe and sound throughout this craziest of years, and continue to stay that way over the summer. We can only hope that, by the time we return next year, we’re a lot closer to a new normal than we have been for the past eight months. Fingers crossed.

Until then, enjoy the Christmas period and stay safe – and Carna Woods!

All hail Pendles
What a year it has been for our skipper. He is now the lone holder of the club’s games record, with 316 and counting, having broken Tony Shaw’s old mark of 313 in the final home-and-away game of the year against Port Adelaide. He also eclipsed Nathan Buckley’s record for having captained the Magpies the most times of any player in history. Plus he finished second in the Copeland, despite missing four games, making it a staggering 12 top-three finishes in the past 14 seasons. That is a club record, and he now sits fourth on the all-time AFL list, behind Gary Dempsey, Kevin Murray and Bob Skilton. He also now has a total of 207 Brownlow votes in his career – the most of any Magpie and the seventh best overall (the six above him on the list have all won Brownlows). What a player.

Curiosities from a weird season
* Hawthorn’s lowest score in the last 50 years has been 3.9 (27) twice. The first time was against Collingwood in Round 21, 1975, in which Peter Moore played. The other was in Round 6 this year – in which Peter’s son Darcy played!
* When Pendles was a late withdrawal against the Eagles in Round 8, it became the first game since 2009 that both he andSteele Sidebottom had missed the same game.
* Our VFL/AFL ledger against Carlton is now even at 127 wins each (though we’re still in front on the overall count, 135-131). This year also became the first time we’ve kept Carlton goalless in a half since 1909.
* Our unbelievable win against the Eagles in the Elimination Final – up there with the best against-the-odds finals wins of all-time – was only the second time we’ve won a final by a point. The other time was the famous first semi of 1981, when we beat Fitzroy 133-132.
* We have now played finals at no fewer than 12 different venues: MCG, Waverley, Brunswick Street, East Melbourne, Football Park in Adelaide, the Gabba, The Lake Oval (South Melbourne), Perth Stadium, Princes Park, Stadium Australia at Homebush, Subiaco and the WACA. (We’re yet to play a final at Adelaide Oval, Carrara, Docklands, the SCG, Giants Stadium or Kardinia Park)
* We know there are mitigating circumstances with the shorter quarters, but this was still the first time since 1916 that we’ve gone through a whole season without reaching 100 points in any game.
* Josh Daicos became the first Magpie since Leon Davis in 2008 to be awarded the AFL’s Goal of the Year, for his preposterous banana from the boundary against the Swans. In doing so, we think he became the first ever Father-Son winner of the award, in combination with dad Peter’s equally preposterous effort from the boundary against Richmond in 1991. Spooky!

Farewell to Magpie champs
Former captain and Copeland Trophy winner Terry Waters sadly passed away during the year, as did long-kicking specialist Colin Tully, cult figure Bruce Gonsalves and key forward Kevin Pay. Read our tribute to Terry here. Stories about Colin, Bruce and Kevin can be found on their respective pages on Forever.

Functions and displays
We managed to set up our displays celebrating the anniversaries of our 1990 and 2010 Premierships just before Covid-19 put a stop to things. Which means nobody has been able to see them! Given that, we’ll likely leave those displays up until at least some of our fans have been given the chance to have a look.Obviously the virus also put a stop to our planned functions for 2020. We’ll have to see what next year looks like before deciding what might happen with those sorts of things again in 2021.

History rewritten
Two extraordinary research finds over the summer have rewritten important parts of Collingwood history. We now have one lessplayer than we thought, and we also have a new joint winner of the Leading Goalkicker award for 1964 after a bizarre Grand Final scoring error. Read about the case of too many Smiths here, and the Grand Final mistake here.

Donations
Even though the Archives team hasn’t been able to meet since March, we’ve still been busy trying to grow the club’s collection of memorabilia.
Perhaps the most significant item we’ve added was the1896 Premiership Medal presented to our captain Bill Strickland, which was donated to the club by family members David and Donna Thornton. We were also very excited to be able to add jumpers worn by Murray Weideman in 1956 and Mick Twomey in 1960.
We’ll have more information about the year’s donations in our pre-season newsletter next year. But in the meantime, if you’ve been using lockdown to sort through old drawers and cupboards, please contact us at archives@collingwoodfc.com.au if you’ve found anything you’d like to donate!

Spread the word
We want more people to sign up to this group. So please, if you know anyone with an interest in Magpie history, send them this link and get them to join here!