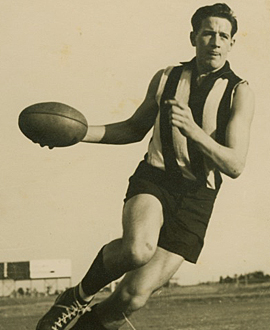 The Weed in full flight

Hello Faithful fans – and welcome to what will hopefully be a footy season that’s closer to normal than the last one.

As always, we have plenty to share with you and look forward to, so let’s catch up on all the news on the history and heritage front at Collingwood.

Feel free to drop me a line at any time (forever@collingwoodfc.com.au), and share our group’s details with your Magpie friends.

See you at the footy.
Carna Woods!

Farewell to the Weed
One of the biggest Collingwood stories of the off-season was the passing of 1958 Premiership skipper and all-time Magpie legend Murray Weideman, who died just a day after his 85thbirthday. Read our tribute to him here.

Murray’s 1953 Premiership teammate Lerrel Sharp has also died since our last newsletter, and here’s a link to his story on Forever https://forever.collingwoodfc.com.au/players/lerrel-sharp/

Eddie steps down
Eddie McGuire ended his long reign as Collingwood President when he stepped down in February. And while the tributes were plentiful, there was one historical curiosity that we felt was worth mentioning. It’s well known that Harry Curtis is the longest-serving President in our history, having spent nearly 26 years in the role. Eddie was entering his 23rdyear. But in terms of gamesspent as President within the VFL/AFL, the final tallies were much closer.
Harry Curtis 515
Eddie McGuire 513
Jack Jennings (Geelong) 512

Thanks for everything Ed!

Another landmark for Pendles
And while we’re on the subject of records, our skipper keeps breaking more of them every year. This year, touch wood, he should break the League record for games played at the MCG. Former Tiger Kevin Bartlett holds the record of 200. Pendles started the season on 198, meaning he is on track to set a new mark when we play the Giants at the G in Round 4.

Displays and functions
We set up displays in the foyer celebrating our 2010 and 1990 Premierships in February last year, just before COVID hit. Given that no members of the public have been into HQ since then, we’ve decided to leave both displays up for the rest of this year at least – and hope that some more fans and members will therefore get a chance to see them!

We usually have at least one major historically themed function each year too, but that is also on hold until we can get some more confidence around planning.

Under-19s and reserves
Our research team at the Archives has made huge progress over the past few years with a jaw-dropping body of work – listing all the players known to have played with our reserves teams from 1919 to the current day, and with our under-19s from 1951-91, together with their games and goals. Phil Taranto and Rob Harris have done a staggeringly good job pulling all this together. There’s still plenty of gaps – early records are notoriously unreliable – and we’re continuing to update info as we find it, but it’s well worth a look, especially if anyone you know has ever claimed they played with either team. Now you can check!

As always, if you can fill in any of the holes, please let us know.

2020 Acquisitions
Last year was a big one for significant additions to the club’s collection of memorabilia.

The highlight was Bill Strickland’s 1896 Premiership Medal, donated by family members David and Donna Thornton, but we also added jumpers worn by Murray Weideman in 1956 and Mick Twomey in 1960, our very first membership medallion from 1940-41, some great fan memorabilia and a bunch of wonderful 1950s under-19 photos.

Check out all our new items – and the lovely people who donated them – here!