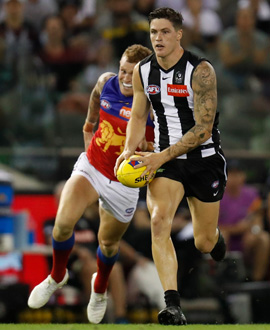 Crispy in full flight against his former club Brisbane.

Well, thank goodness 2021 is over. It really wasn’t the best season to be a Magpie fan, but we’ve been through worse and we know we’ll bounce back again – and soon. As fans with a keen interest in history, you’ll know we’ve done it before, and we’ll do it this time too.

In the meantime, read our wrap of the season, and all that’s been happening in the history space.

Stay safe, and we’ll hopefully see you at the footy again in 2022!

Welcome to the club Crispy!
Jack Crisp became just the 53rdMagpie to win a Copeland Trophy when he pulled off a thoroughly deserved victory at the best-and-fairest count in early October. He really has been Mr Consistent since he crossed from Brisbane, and he rarely puts in a bad game.

Even better, he rarely misses one either. His streak of successive games now stands at a remarkable 163 – six with the Lions and 157 with us. That gives him the longest streak of any current player in the AFL, and he’s closing in on Jock McHale’s Collingwood record of 191.

And a nod to the bloke in third
While it was great to see Brayden Maynard grab the J J Joyce Trophy for runner-up, it was even more remarkable to see Scott Pendlebury grab yet another podium finish. That gives him 13 top-three finishes in his 16 seasons, the most of any current AFL player and the equal third highest of all-time, level with Swans icon Bob Skilton and behind only Footscray and North Melbourne ruckman Gary Dempsey (15) and Fitzroy legend Kevin Murray (14).

He would almost certainly have had another top-three finish in 2017 too, when he led the count until a finger injury sidelined him for the last six rounds. He’s also now sixth in the all-time AFL list of career Brownlow votes, with 213 votes. Simply staggering.

VFLW champs thwarted
A big shout-out to our VFLW team, who went through the regular season undefeated 16-0 (their third straight year as minor Premiers) but were denied the chance to add another Premiership to their footballing CVs when COVID prematurely ended the season before the Grand Final could be played. That’s such bad luck – but they’re still the overall Premiers in our eyes!

Plus we had four players – leading goalkicker Imogen Barnett, full-back Jasmine Ferguson, Caitlin Bunker and Matilda Zander – as well as coach Chloe McMillan, named in the Team of the Year. A magnificent season by all involved.

The Murray Weideman Collection
As you know, The Weed passed away back in February, but his family has since donated his memorabilia – including his three Copeland Trophies and his 1953 Premiership trophy – to the club’s Archives. A huge thank you to his son Mark, wife Victoria and the whole family for their generosity. Read about it here.

A footy with a story to tell
Another great donation this year came from John Elmore in Albury, with this 1930s football.

Other donations
By the way, if you want to keep track of the items that people are donating our way, we’ve introduced a new section to our History & Heritage hub where we showcase both the items and the lovely people who have donated. Check it out here. If you want your name up in lights too, you know what you have to do!

Ray Jones
And a belated Happy Birthday to our oldest living player – and renowned architect – Ray Jones, who turned 96 during the year. He actually made it over here for the ANZAC Day game in April, which was a great effort by the former navy man. You can read about his career here

Phil’s Trivia
Phil Taranto, from our research team, is quite the nerd when it comes to Collingwood facts and figures (and we love him for it!) So each issue of this newsletter we’re going to post one of the quirky stats he’s dug out along the way. The first question is: Which jumper number has been worn into battle most often in Magpie history?

The answer is at the end of this article.

History resources
Just a reminder to check out our new History & Heritage Hub to keep up with all the latest news in the field.

Vale Mike Delanty
Mike Delanty, part of the famed 1958 Premiership team, sadly passed away back in July. You can read our tribute to him here. Mike’s Premiership teammate, Murray Weideman, died in February, and Ray Thomas in May.

Milestones
Congratulations to Steele Sidebottom, who notched up his 250thgame in the black-and-white during the season. He currently sits on 264 games, seventh in the all-time Collingwood list, and with normal fortune should be in fourth spot by the end of next season. And similar plaudits to the great Geva Mentor, who registered her 200thgame of top flight Australian netball during last season. Well done to you both!

Donations
As always, keep those donations coming – we love getting new boxes of stuff to sort through! Or even just ask us if you’re not sure what to do with stuff you have – we’re happy to help.